A Day in Naples 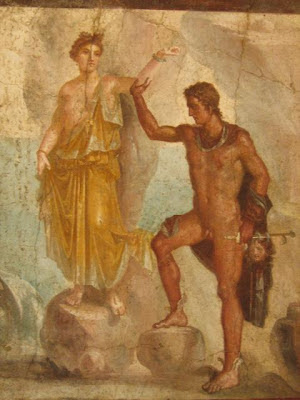 Thanks to Trenitalia's "mini-fare" discounts, I took the fast train down to Naples and back on Saturday, my first visit to this chaotic but fascinating city.

One day certainly isn't enough time, but I did lots of walking up and down Naples' many hills and besides getting a peek at the city's street life, I also saw two beautiful churches, including the Duomo, as well as parts of the National Museum of Archaeology.

Of course, a real highlight was tasting some of Naples' very famous pizza. I have never quite believed all the hype around this: why would pizza in Naples be all that different from pizza anywhere else? Now, however, I am a convert. I still can't explain why, but my 5-euro pizza was the best I have ever had! 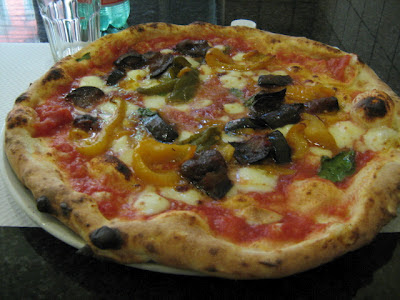 Perhaps it was the crust: very thin on the bottom (just as they are here in Rome) but tender and just a bit chewy. Even the thick outer edges, which everyone usually gives up on -- me included -- were delectable! I had a vegetable pizza with pieces of eggplant, plus red, green, and yellow peppers. Every bit was so fresh and delicious.

My first stop of the day, after a hike up from the train station, was Naples' Duomo, the Cattedrale di San Gennaro and named in honour of Saint Januarius, the city's patron saint. Apparently, it is actually dedicated to the Assumption of the Blessed Virgin Mary. Which perhaps explains the medieval mosaics in a lower area of the cathedral, the Baptistry. 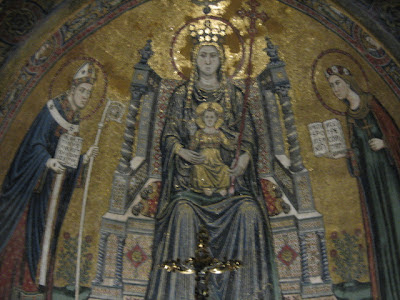 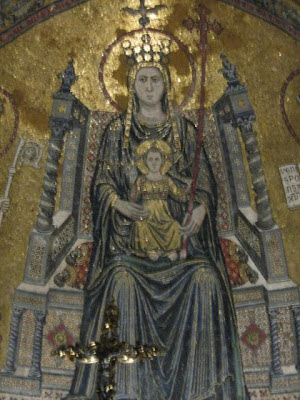 From there, I walked through some incredibly hectic streets (the pedestrian-only areas are filled with racing motorcycles!) to Santa Chiara, a real oasis in such a hectic city.
After lunch, I dragged my pizza-laden tummy up, up, up to the National Museum of Archaeology. Except for a large group of French students in their early teens, the place was very, very quiet. And not so well tended. Still. It was fascinating, and I joined the students (and every other visitor) in snapping a few photos. No flash, of course!!! Many of most fascinating exhibits have been excavated from the city of Pompeii. 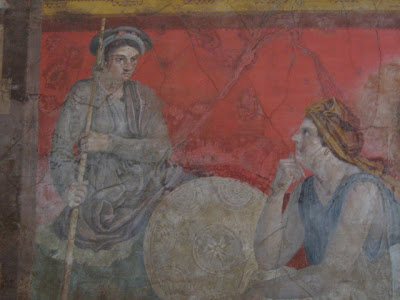 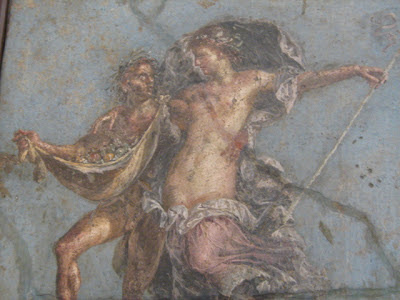 I was especially struck by this 4th century BC sculpture of a girl (or, possibly Eros/Cupid) wrestling with a scary-looking dolphin. I guess these were the pre-Flipper days when dolphins still had teeth! 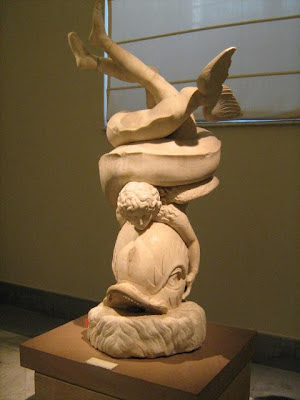 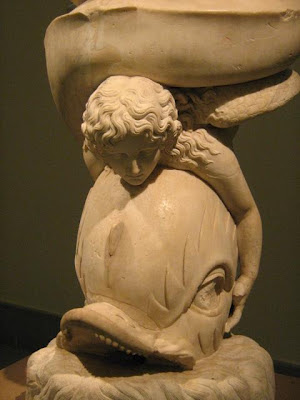 It sounds like a great day Sandra and I think you deserved that little mini vacation!

That pizza looks and sounds delicious. It is early morning here right now, yet you have me craving that pizza now!

It sounds like a great day. We had read so many "warnings" about Naples, that our experience is from the train platform to the Circumvesuviana platform and back. Looks like we missed out!

Susie, it was something else! I've eaten a lot of pizza (in the interests of making comparisons) and this really was extraordinary.

Hi Kathryn, I know what you mean. I've probably visited Italy a dozen times and this was my first venture to Naples, mostly because of all those warnings. I wouldn't say the concerns are overblown, but I think with a bit of extra caution a visitor would be okay. I hope you'll get another chance to visit.

Hi Sandra, sounds like you had a wonderful day trip to Naples. And your pizza looks delicious. I can't remember if I saw that interesting sculpture at the museum. It looks very unique. It's a wonderful museum.

Glad you enjoyed your trip. Thanks so much for sharing.

Hi Kathy, it is such a huge museum; I know that I missed so much -- I can only absorb a certain amount of information at any one visit.

Hope you have a great week!

What a great day! Loved the pre Flipper dolphin... I never think of Naples as a doable day trip from Roma but obviously it can be done. How was the train station and connecting transportation issue from the Naples end?
My husband and I had a whirlwind day trip to Naples once with Italian friends. They were even more safety conscience then we were. I loved it and have always wanted to return.

CG, with the high-speed train (and the mini-fare sales)it was just over an hour to get to Naples from Rome (I took the slower train returning and it was 2 hours.) So it really can be a day trip from Rome.

The central train station was surprisingly clean, calm, and user friendly with a visitors information office right inside.

From the train station, it was an easy walk to the Duomo, about 20 minutes and a bit of a steep hill at the end. The National Museum of Archaeology, about 20 minutes further on foot. So, not difficult for those sites. If I had had the time to also visit the Capodimonte museum, I think I would have tried using the metro system. Next time!

Grazie Sandra, for the details at the Naples end of your journey. You're giving me "food for thought" for my May Roma trip... and I want one of those pizzas...

What a great sounding day - Naples is hectic to be sure . . .can't imagine what it would be as a day trip! LOL I guess we'll find out since we intend on making it a day trip this December when we're in Rome for Christmas.

Jerry, are you certain that you'll be coming to Rome for Christmas? I hope so -- and I hope that I will be here to celebrate with you and Paolo (maybe Christmas pizza in Naples?)