Roasting and bombing and touring, oh my! 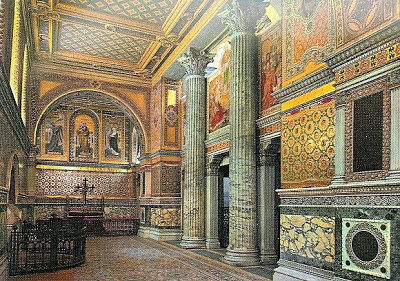 Saint Laurence, known in Italian as San Lorenzo, is famous for his martyrdom: he was roasted on a grill and reportedly uttered at one point: "Turn me over, I'm done on this side."

He's often shown as quite a handsome young guy, carrying the grill upon which he was martyred here in Rome in 258. Saints are often shown with the instrument of their martyrdom. Which isn't so pleasant to think about. 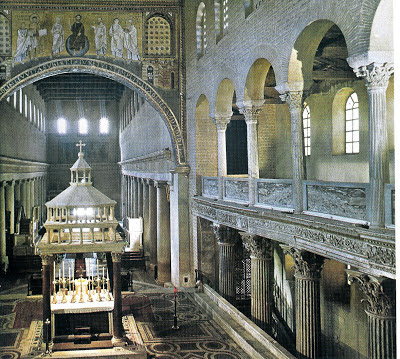 However, I had a very pleasant time on Friday visiting the Roman basilica that bears his name as it was constructed on the spot where the luckless San Lorenzo was martyred, and the site of crypt containing his remains: San Lorenzo fuori le Mura, or Saint Laurence Outside the Walls. 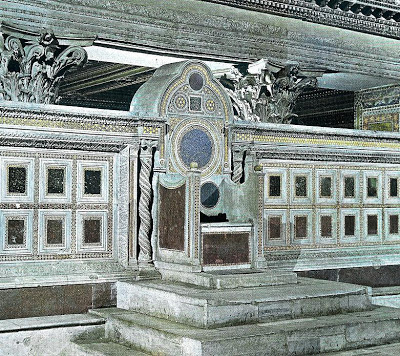 The basilica is also very famous in Rome because it was bombed in 1943 during the Second World War when the Allies were aiming for nearby Termini railway station (which is just inside the city's walls) and instead, blew a major chunk of this beautiful church to Heaven. Tenacious Romans picked up the pieces, however, and today the church looks splendid.

One of the many cool things about this church, which boasts some lovely medieval frescoes and mosaics, is that it was built in two different eras. During the late 500s, Pope Pelagius II commissioned a church in honor of the martyr. Then, in the 13th century, another pope built an even bigger church on the same site, incorporating some parts of the ancient structure.

There are extensive catacombs running underneath but because of flooding in October 2011, it's not possible to visit them. 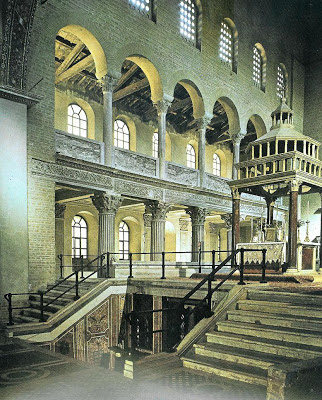 My Italian friend Laura (a Classics prof and tour guide) gave me a great tour, as always. Her English is very good but I've decided to keep quiet about this in case she decides she doesn't need to continue with our conversation exchange sessions where she practices her English and I practice my Italian.
Posted by sandrac at 11:14

What a gorgeous church. Fascinating history! Laura sounds fantastic too. I hope that you're having a wonderful autumn in Roma!

Hi Annie, Laura is so generous with her time - I'm learning a lot about Rome's churches and practicing Italian. I've also made other Italian friends through Conversation Exchange - it is really working out well!

Hope that all is well with you!

Hola from Buenos Aires Sandra, what fascinating history. I love your comments about the tenacious Romans picking up the pieces after the bombing for the rebuilding. I think that it is so cool that you have a good friend to practice your Italian as I'm sure that you feels the same with you.

I'm happy for you that your new chapter is going so well.

Have a great weekend and thanks so much for sharing.

Hi Kathy, it's great to hear from you! I hope you're having a wonderful time in Argentina!