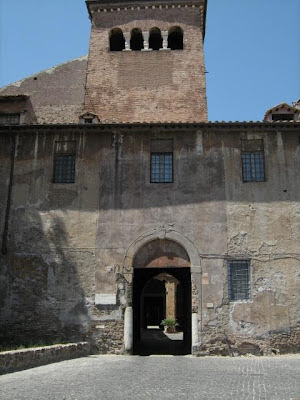 For the most part, it's worked out well. I've connected with several native Italians who want to speak better English while helping me with Italian.

An added bonus has come with my new friend Laura, a native Roman who wants to be an English-language tour guide to supplement her teaching income.

So, our weekly get-togethers generally involve a private tour for me, in English, of some fascinating site, followed by a long coffee in Italian.

Last week, we explored Rome's fascinating Santi Quattro Coronati, a basilica that dates from as early as the 4th century and is devoted to four martyrs who became saints. 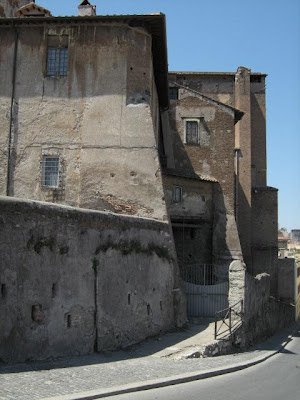 Although the church is a stone's-throw from the Colosseum, I hadn't yet gotten around to visiting it.

It's really gorgeous - lovely cloister, beautiful frescoes (especially if you ring the bell to get inside the St. Sylvester chapel) and an interesting history. The church was built like a fortress - which was one of its original jobs, to protect the pope of the day who was living nearby in the Lateran Palace. 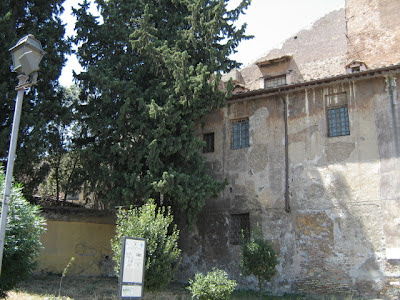 One of the first churches of Rome, construction was completed the end of the 6th century, then expanded under Pope Leo IV (847-855) in Carolingian style.

However, in the Norman Sack of Rome in 1084, a sizable chunk of the basilica was destroyed and a subsequent pope rebuilt only what was left. (Laura, an excellent tour guide, pointed out bits of evidence of this. For example, there are now two courtyards - the original plus the “new” courtyard established after the sack, over what had been a long stretch of the nave of the church. So now, the church looks strangely square.) 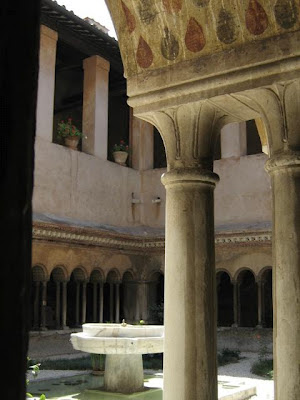 Anyway, in 1247, the chapel of St Sylvester, on the ground floor of the fortress, was consecrated; and decorated with frescoes telling the false tale of how Constantine gave the Catholic church sovereignty over the Roman Empire.

Inside the basilica are frescoes explaining the story of the four martyrs to whom the church was dedicated, and whose remains supposedly rest here.

The Four Crowned Martyrs - Santi Quattro Coronati - were reportedly four soldiers who became Christians at the time of Emperor Diocletian (284-305). The emperor ordered their execution when they refused to worship a god he chose.

By the way, a nun we met in the cloister said that later this year, the church is going to open the doors on a Gothic hall that is apparently filled with frescoes that are only now being made public.

The 13th century frescoes had been so well hidden that it actually served to preserve them in apparently fantastic condition.

Can't wait to see that!

How beautiful.
Imagine something that they have managed to keep so hidden. That sounds like a fabulous tour!

If your friend wants to practice on some more people, pick me! Pick me! ;) The photos of the courtyard are just beautiful.

Sandi, I'm really interested in seeing the hidden frescoes - I can just imagine how beautiful they'll be.

Hi karen, I wish I had some interior shots but it's not permitted. And I'll bet Laura would appreciate some practice with your son - especially if he had plenty of questions (so she can practice ad-libbing!)

Really?! We'd love to be her guinea pigs!

karen, I'll certainly ask her; she might also have some good ideas for spots that might be especially interesting for your child!

Hi Sandra, that's so cool that you met a friend. It's cool to be able to explore around Rome together with her and at the same time learn from each other. I love your photos and learning about this Basilica and how exciting that they will be making those well kept secret frescoes open for public viewing soon. I'll be looking forward to hearing more about them.

Thank you so much for sharing and have a wonderful evening.

Hi Kathy, it's a fascinating place, and as usual, become so much more so when there is someone knowledgeable to explain all the symbolism.

I think the "new" frescoes are going to be so interesting!

I hope you're having a great weekend!

What a great church. I hope you're able to go back to see those frescoes - how wonderful to re-discover them!

I stumbled across this site and had a good laugh. I think you'll like it too. :)

Your Conversation Exchange sounds like a great fit for you. What a perfect way to strengthen your language skills... and make new friends.

Oh boy, "new" 13th C. frescoes coming soon! I love Santi Quattro Coronati. I stubled upon it while looking for Santo Stephano ~ obviously took the wrong road but enjoyed this fortress like church.

Thanks again for your thoughtful, informative posts.
Ciao!

The restoration of the Aula gotica, carried out with funding from the Ministero per i Beni e le Attivita Culturali, took ten years and was finished in December 2006.

How nice that, six years later, the good sisters are opening it to the public.

Hi Annie, those are some seriously ugly babies, yikes!!!

Thank you Ciao girl, isn't it amazing how some of the beautiful discoveries we make are accidental?

Great information, Anon, thanks! I gathered from the nun we spoke with that there has been a lot of bureaucratic wrangling around the opening, let's hope it has finally been resolved.

How marvellous!! You must have been gobsmacked :) to stumble upon this gem of a church. The cloister looks wonderfully serene. Too bad you can't take photos inside, I'd love to see those frescoes.

I had to check out Annie's link...too funny! Those paintings of baby Jesus with an old man's face always do me in...

Anne, I was indeed gobsmacked!!!! Yet another Roman treasure, and I'm sorry that I can't share it in photos. But maybe once the Gothic Hall is opened, they will have a website that will have better photos than I could ever produce!