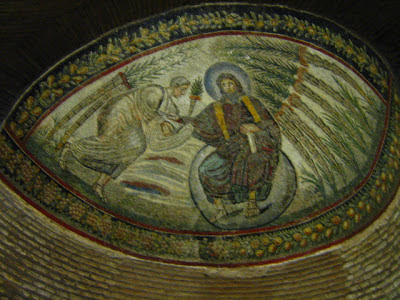 I've just discovered a treasure trove of beautiful, very old mosaics in a fascinating church/mausoleum complex in a northern neighbourhood of Rome.

The Basilica di Sant'Agnese Fuori le Mura (Basilica of St. Agnes Outside the Walls) is a 7th century church that includes some stunning mosaics, the shrine of the virgin martyr St. Agnes, all atop catacombs. 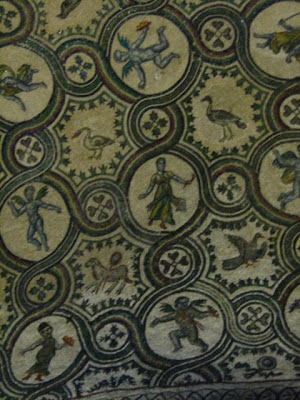 Adjacent is the fascinating, small round mausoleum of Costanza, the daughter of the emperor Constantine who believed her leprosy was cured by her devotion to the martyred St. Agnes, and insisted that her mausoleum be built near the burial site of the saint.

It is also decorated with remarkable mosaics, including some on the ceiling that are in fantastic condition and date from the 4th century.

Visitors to Rome may have seen another church, in Piazza Navona, dedicated to the very young Saint Agnes, who was a member of Roman nobility in the third century.

That church - St. Agnes in Agony  - was built on the site where Agnes was martyred. It boasts as its most important relic poor young Agnes's skull.

The rest of her body reportedly rests here, beneath Agnes Outside the Walls.

An enormous golden mosaic above the altar is stunning. 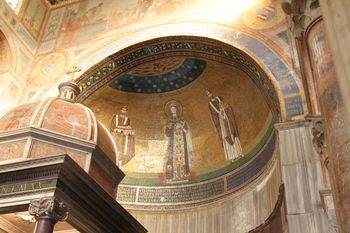 According to tradition, St. Agnes was born in 291 and raised in a Christian family. She was martyred at age 13 during the reign of the Eastern Roman Emperor Diocletian, on January 21, 304.

It is said that the prefect Sempronius wished Agnes to marry his son, and when she refused, he had her dragged around Rome naked (although she miraculously grew enough hair to cover her modesty) before he condemned her to death by burning at the stake.

When the time came, however, the wood at her feet wouldn't burn, so the officer in charge of the troops overseeing her execution drew his sword and cut off her head.

Agnes, who is the patron saint of young girls, is often represented in art as holding a palm-branch in her hand and a lamb at her feet or in her arms.

Outside the church is a wonderful array of marble plaques attesting to prayers answered and miracles worked by the saint. 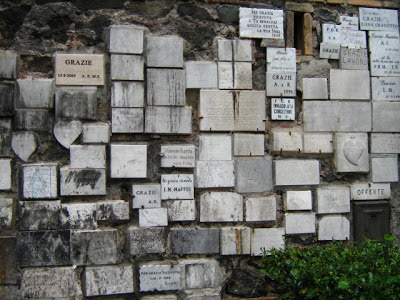 More can be found on the stairway into the church, the ceiling of which is also decorated with some lovely frescoes. 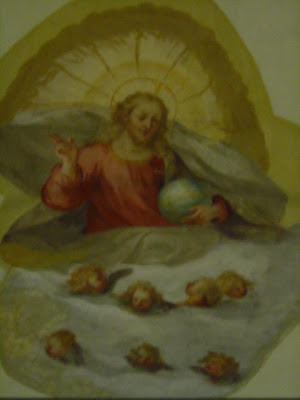 Sandra, I don't know if my comment went through so don't use this one if the first one did. Thank you for sharing your new insights into Rome--I am really enjoying them and plan on rereading your blog before we get to Rome next summer.

BTW I finished your book last night and LOVED it. You write so well and engage the reader. I hope you are still working on your next novel.

Hi Jane, I'm really glad to hear that you enjoyed my novel! I am definitely working on a second book (and hopefully it won't take quite as long as the first to produce.)

It will be great to see you here in Rome next summer!

Jerry, you're going to have a busy time when you're here at Christmas - but this church is right on the subway line so it might be easier to fit in than others.

Hi Sandra, Rome has so much history. I am so enjoying seeing and experiencing your discoveries. The story of St. Agnes is sad. From all the plaques, it looks like there were many miracles worked by her. She was so young too. The golden mosaic is very beautiful.

I really enjoyed this post and your photos are wonderful. Thank you so much for taking the time to share Rome with us. Hope you're having a wonderful fall season in Rome.

What a fascinating church! The mosaics are gorgeous, and there's something very poignant about that wall of plaques. Thanks for sharing this with us!

Margaret Visser explores this church extensively in her 2000 book The Geometry of Love.