Really fresh bread from the source 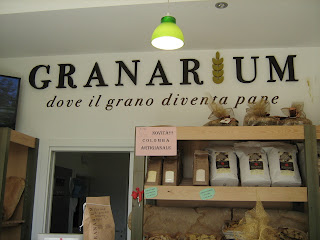 Recently, my friend Letizia took me to a very interesting, inspiring farm/mill/bakery just outside the Umbrian town of Bevagna.

From the field right onto the table, family-owned Granarium says it is committed to producing bread the old-fashioned way.

That means the Lucarelli family, working in the green heart of central Umbria, controls every step of the food production process: from planting to harvesting the grain, grinding it, baking it, and even selling it.

Their company, Granarium, is serious about the "zero-kilometre" production method - every step of the process occurs right on the farm - the way grandpa would have done it. 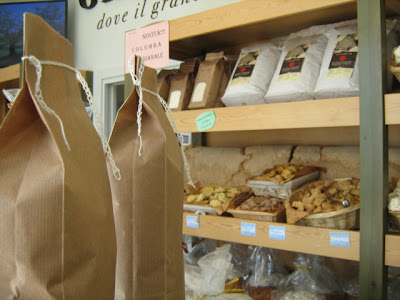 It has to be, for there really is no other alternative for a small farmer to remain financially viable and independent, says Gian Piero Lucarelli, who founded Granarium on the family farm with his sister Patrizia less than one year ago.

Their philosophy also offers real benefits to the consumer, who can buy flour, bread or other bakery products from Granarium and know everything about its origins, he adds. "Our goal is to offer the consumer a product of high quality, in absolute transparency of all stages of the supply chain," Lucarelli said as I visited his small, clean plant located a few kilometres outside the town of Bevagna.

"A chain that is shortened by connecting the consumer with the earth...because this is my idea of where it all started". 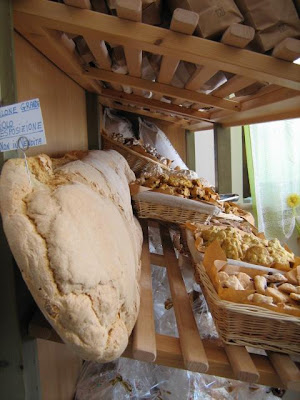 The Lucarelli siblings, whose company motto is "Where grain becomes bread", are so enthusiastic about their operation that they offer public tours of the facility, located next to the family home.

Granarium's small retail shop is open to the back production facility, so customers can see every step, including the point where the grain is ground into flour using two massive, 1929-era millstones made of natural stone.

That distinction is important because most "stones" used today for grinding grain into flour are artificial, rather than made of real stone, and as a result, these can heat up during the grinding process, tainting the flour with a scorched odour. 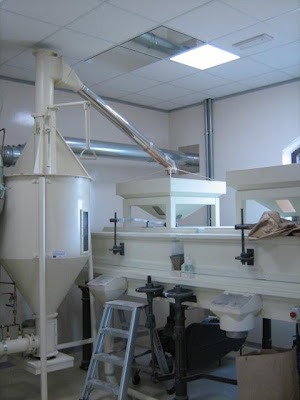 The grain also passes through various cleaners, sifters, humidifiers and other stages in the process of becoming flour and being consumed.

No chemicals or preservatives are added to the grain during this process, say the Lucarellis, sticking to their philosophy of creating a product that grandpa would have recognized.

Shaped by hand, the dough rests in rising trays until it is ready to be baked in a wood-fired oven fuelled by beech to get the best heat and aroma into the product.

Small sacks of fresh flour, from white to whole-wheat, are available as well as breads of all types, focaccia, ready-to-go pizza, sweet cakes, biscotti, and even gift packages. 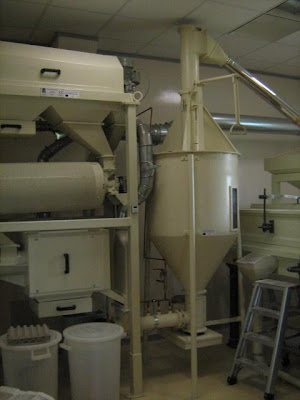 Besides being sold on-site, Granarium products are also available at regional farmers' markets.

Out back, three tall green silos contained the grains harvested by the Lucarellis from 15 hectares of land where they also produce lentils and chickpeas that are available for sale in the Granarium retail store.

As you know I go to the Foligno Farmers' Market every Friday morning and always buy a variety of Granarium products. Today, for the first time, we drove over to their site and little store (yes, open on Sunday mornings) to say hello and get some fresh bread for a special dinner tonight.

What a coincidence that today you also posted this entry!

Hello Mary, what a lovely coincidence that you were visiting the store just as I was posting this. I hope that you and Maurizio are enjoying the spring in Umbria!

well, next time we should all be there together!

What a wonderful philosophy! Seeing the return of artisanal products/producers and the move away from mixes and prepared foods makes me very happy.

What a wonderful philosophy! Seeing the return of artisanal products/producers and the move away from mixes and prepared foods makes me very happy.

Hi Sandra, I enjoyed this post and learning about the family owned bakery. I love reading when owners have such a respect and commitment to their products.

I really enjoyed coming along on the tour with you. I only wish I was there to sample their wonderful bread. Maybe some day. I'll have to bookmark your post for future reference. I really love the transparency comment.

Thanks so much for sharing.

Jerry, knowing your interest in food and really good products and ingredients, this would be your kind of place!

Kathy, when you visit Umbria with your sister, I think you'd enjoy stopping by!