Some Treasures of Tuscany


I was so fortunate last weekend to spend a few days in the Maremma region of Tuscany, staying with my friends Stefania and Paolo in their beautiful apartment in Manciano. The sun was wonderfully hot on their rooftop terrace, with such stunning views of the medieval town that it felt perfect. The rest of the house is protected by metre-thick stone walls, making it blissfully cool inside.Of course, some of us love the heat!


Late at night, we saw so many stars from the terrace (to say nothing of the shadows cast by an imposing fortress built around 1424 when the town was briefly occupied by the Republic of Siena.) 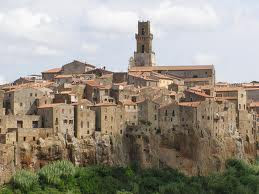 Growing up out of the rocky hilltop was the nearby town of Pitigliano, whose history dates to Etruscan times, long before the Romans swept through Italy; long before Christianity.

The Etruscans hollowed caves out of the tufo rock which were later used as bakeries by the Jewish population that gave Pitigliano its second name, "Little Jerusalem". Jews fleeing persecution in other parts of Italy settled in Pitigliano which for several hundred years was a frontier town between the Grand Duchy of Tuscany and, to the south, the Papal States.

Sorano is another ancient town carved from the tufo rock of the area and also dates from Etruscan times. Today, it is filled with lovely little shops - some selling fantastic local cheese.


Like many communities in this part of Tuscany, it had been dominated by the Republic of Siena and later, the Orsini family. Both of which left their mark in great towers and fortresses.

I had no idea the coastline of Maremma, running along the Tyrrhenian coast from Grosseto to Capalbio, would be so beautiful, rivaling the far more popular and crowded Amalfi in places. I was fascinated by a thickly wooded promontory named L’Argentario.

Apparently, this has long been a vacation spot for wealthy Romans and includes such towns as the yacht-filled Porto Santo Stefano, and the colorful Porto Ercole, where the Baroque painter Caravaggio died of malaria in July 1610.


From view points, we could easily see across to the infamous island of Giglio (where the Costa Concordia crashed in January 2012, killing at least 30 people and injuring 64 with 4,200 evacuated from the luxury liner.) Stefania told me that on a clear day, the island of Corsica was also visible.

We took a delightful stroll through the nearby fishing port of Orbetello, with its blue-tinged lagoon.


And all this only a 90-minute drive north of Rome! Hmmm, I think I could be tempted to rent Stefania's cozy holiday apartment on the cool ground-floor and stay awhile....
Posted by sandrac at 07:43

I am so glad you went, it's a totally deserved break for you and I am looking forward to seeing you soon in Umbria!

Great photos!! I have always wanted to visit Pitigliano. Years ago, I read the book ~ Child of the ghetto : coming of age in fascist Italy, 1926-1946 : a memoir by Edda Servi Machlin. Part of the book takes place in Pitigliano and part of the book takes place in the countryside nearby. It's a pretty intense book. Glad you were able to enjoy your time visiting so many cool places.

Thanks very much, Letizia, see you soon!

Hi Girasoli, it's lovely to hear from you. That book - Child of the Ghetto - sounds very interesting. I'm going to look for it!

Hi Sandra, wonderful post. What a beautiful location. I enjoyed learning about the history and seeing your beautiful photos. And it is only 90 minutes away from Rome. I can see why it would be a favorite getaway.

Thank you so much for introducing us to such a lovely place in Italy.

I love it when you take your camera along on the road trips!

Looks great. Is this place for rent to everyone? Do you have a web link?

Hi Kathy, there are so many lovely spots that are really accessible from Rome. I just need to get out and see more of them!

Sandi, I think it's time for a new camera, some of these sites deserve better photo ops!

Hi Kathryn, Stefania has an advertisement on Homeaway, here's the link: http://www.homeaway.com/vacation-rental/p1051624

Love these weekend trips . . . makes my jaunts to Stratford seem so underwhelming in comparison.

What a beautiful shrine! This place looks fantastic.