Rome is full of surprises! 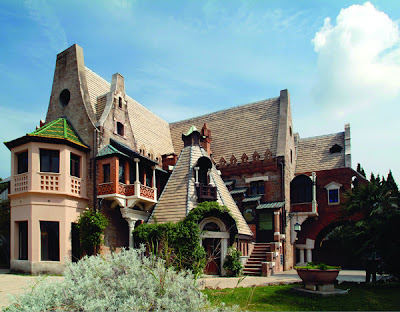 Rome is full of surprises. Take Villa Torlonia, one of the more unusual that I've seen in a while, including a very interesting complex of buildings and a beautiful park with large, shady palm trees not too far from Termini in Rome's centre. Its history includes providing a home and command centre for both the Italian fascist dictator Benito Mussolini, from the 1920s through the Second World War, followed by the Allied command. 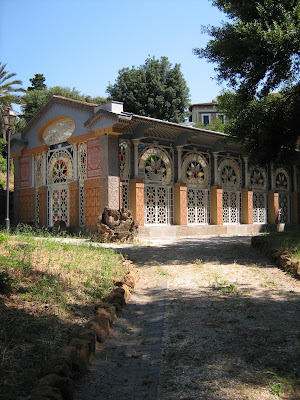 I laughed out loud when I saw the unique and playful Casina delle Civette, one of the most whimsical buildings in the complex. Although the House of the Owls (civette) was designed in 1840 as a kind of Swiss chalet, it drew its nickname from the owl motif that is used almost obsessively throughout the house. 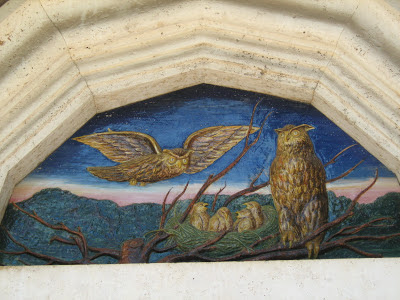 The present structure, which is choc-a-bloc with interesting, Liberty/ Art Nouveau style stained glass, is apparently vastly changed from the original chalet style which was built to provide an escape from the main and massive villa. 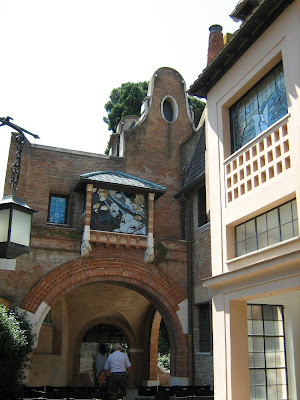 The Casina delle Civette, which has two sections linked by an overhead walkway, now hosts a small museum and exhibition space. 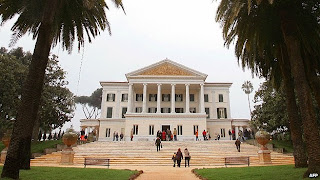 Nearby, the larger and formal  Villa Torlonia, which was renovated during the 1990s and completed in 2006, now belongs to the city of Rome and is the site of a large museum of contemporary art and changing exhibitions. (Photo from AFP)

But for 18 years the villa, on Via Nomentana, was home to the family of Mussolini who actually built a large air-raid shelter underneath the historic home. Subsequently, in June 1944 the property was taken over by the Allied High Command, which remained there until 1947.

Today, the gardens also include a historic Temple to Saturn, a large theatre, a conservatory, an extensive collection of classical sculptures, fountains, great walking paths. And of course, a lovely bar/cafe!

Another reason to return to Roma!

Hi Sandra, I love how you're discovering all these great places in Rome. The buildings are all so different and what a grand looking building for a museum.

Thank you so much for sharing. Hope you're having a fun Roman summer.

So many good reasons, Kathryn, I hope you'll be planning a trip here soon!

Hi Kathy, Rome really is full of surprises and I need to make a greater effort to uncover them! Right now, I'm in the throes of shopping for a new laptop, which seems to be taking a lot of time and energy.

Hope you're having a great summer!

So charming and eccentric! Thanks for sharing all these cool places with us. Hope you're having a good summer in Roma!