A Rome church filled with ghosts...... 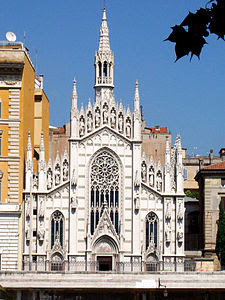 When my friend Laura asked me if I wanted to visit a haunted church in central Rome, I did not hesitate. I am not sure I believe in ghosts, or if they believe in me, but it certainly sounded interesting.

The Chiesa del Sacro Cuore del Suffragio, or the Church of the Sacred Heart of Suffrage, is on the banks of the Tiber, just opposite the historic centre and really just a stone's throw from the Ara Pacis (which isn't that far from Piazza del Popolo.)

It was built in neo-Gothic style between 1894 and 1917 by the architect Giuseppe Gualandi, so by Roman standards, it's extremely modern.

Why, then, the rumours of ghosts and the dead skulking about? It's not so old that it has had time to collect many dead, or old enough that any of Caesar's contemporaries would be hanging around here.

The link is explained by its Museum of Souls in Purgatory and the fact the church was founded in memory of the souls in Purgatory. (Just a reminder, the Catholic Church sees Purgatory as a kind of state or place where souls can be cleansed of sin enroute to heaven.) As a Catholic, I was raised with this concept so I can roll with it quite easily. 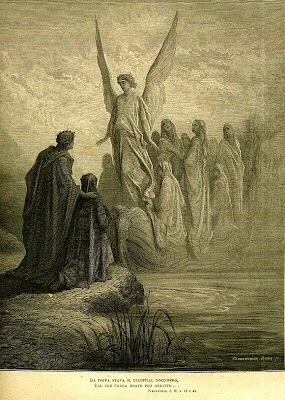 (Images are from Wikipedia; the art is illustrating Dante's version of Purgatorio)

Adding to the drama of this particular church, legend has it that on one of the pillars in the church, the shadow of man's head was once seen and this supports the notion that souls in Purgatory are stopping by. Presumably, on their way to Saint Peter's Square and the Vatican, about a kilometre down river from the church.

So, the priest who made the initial discovery began collecting further evidence, including strange fingerprints on a tablet, demonstrating that souls of the dead, now in Purgatory, stopped by. 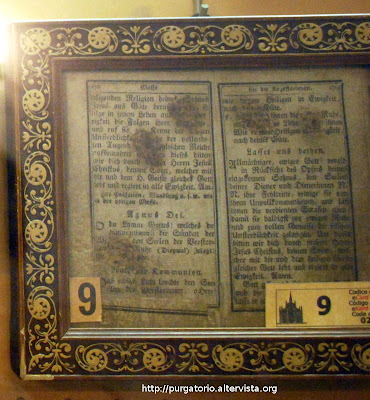 Included in the one-room museum is a prayer book, where one page bears the handprint of a dead person that a priest swore appeared out of nowhere late one night as he was reading. And several scorched garments where witnesses said a dead soul touched them to get their attention. Why this tended to scorch fabric remains a mystery.

Speaking as a Catholic, and as a woman of the world, I find all of this to be rather farcical and far closer to superstition that faith. But then again, this was far more interesting and less freakish and offensive than the Crypt of the Capuchin monks at Rome's Barberini metro stop. That is just creepy and not worth the 6-euro admission fee.
Posted by sandrac at 14:11

I agree about the Capuchin crypt but the €6 fee was worth it to see Caravaggio's St Francis in Meditation - amazing!

Hi Anne, you make a very good point. The Caravaggio was worth the entrance fee. But the crypt was deeply weird!

Hi Sandra, the photo of the prayerbook with the handprints is a little spooky. I'm not a fan of visiting cemeteries or crypts, but will do it if I find the history interesting or the visit significant for me such as when I visited the old cemetery in Prague. The background stories and prayer book may make me curious enough to visit.

I found your post very interesting. Thank you so much for sharing.

Thanks, Kathy! The museum was not at all creepy but there is some interesting history. I was also a bit curious to know why the founder of the museum went to so much trouble to try to find "evidence" of souls in purgatory! A mystery that may never be solved.

What a cool church! I love places with legends like this. I'd like to visit this one. I did go to the church with all the skulls- so bizarre!