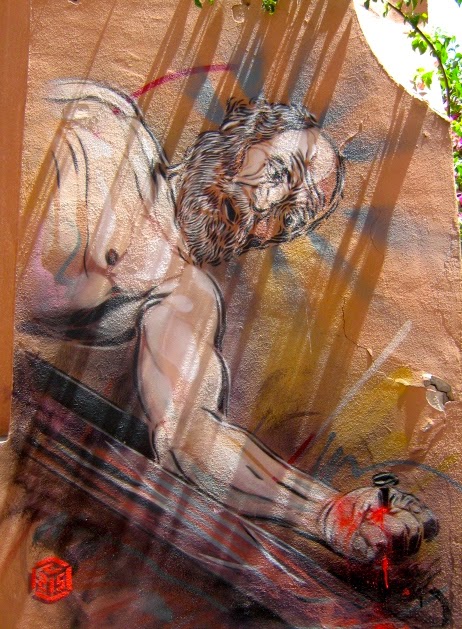 I believe French street artist C215 has recreated Caravaggio's Crucifixion of St. Peter on a quiet little corner in my Rome neighbourhood. C215, whose real name is Christian Guémy, has been described as France's answer to Banksy.

As you can see below, the 1 p.m. sun is casting shadows on the art from the vines growing from around the corner.

The original Caravaggio, painted in 1600, can be found in Santa Maria del Popolo. 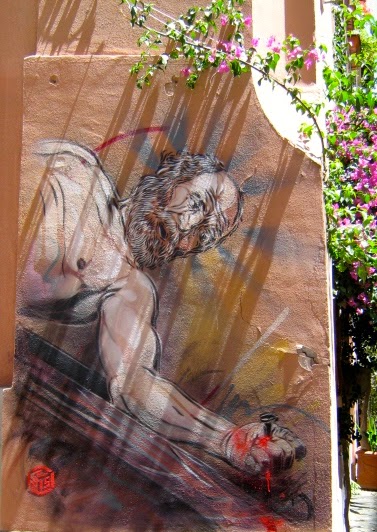 This portion of the painting shows the martyrdom of St. Peter by crucifixion. It is believed that Peter asked that his cross be turned upside down because it is said he did not want to appear to be imitating Christ and His crucifixion.

Fans of Caravaggio, whose full name was Michelangelo Merisi da Caravaggio, know that he painted this fresco for the Cerasi Chapel and in 1601 painted a second work on the opposite wall of the small chapel showing The Conversion of Saint Paul on the Road to Damascus. 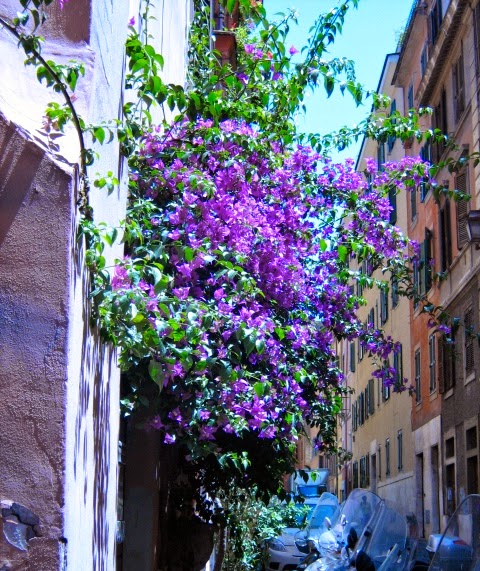 This flowering bush is just around the corner and its vines cast shadows on the street art. Below is another look down my street to the Forum of Augustus. 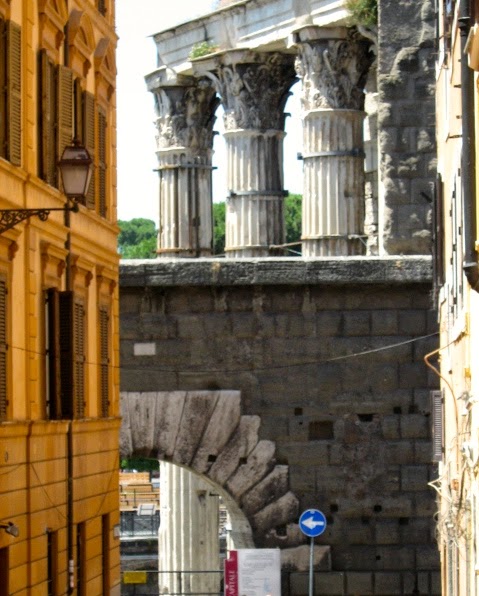 I apologize for the long breaks between my blog posts. Besides work, I have been busy with my novel The Virgin and the Griffin, which is being published in Italian.

Over Christmas, I met a publisher in Perugia who has had my novel translated into Italian and at this point, it is being published. Very soon, the Italian edition will be launched in Perugia and while I am excited about the event itself, I dread my role which will likely involve a reading and maybe questions and answers in Italian. Yikes!!!!

Hi Sandra, congratulations on your novel being published in Italian. I'm sure you will do very well in your reading and Q&A.

Your photos are beautiful and what a great neighborhood to live in. I enjoy photographing the many street art when traveling. I don't remember seeing very many in Rome. This one is beautiful and I found the background very interesting.

Sounds like you are very busy but that's a good thing. Just remember to throw in some relaxing moments for yourself too.

Have a wonderful weekend.

Hello Kathy, thanks for your encouragement! I am beginning to see more street art around Rome - it is fascinating, isn't it? Earlier this year, there was a great portrait of Pope Francis as a superhero (flying through the air with a cape and all) by an Italian artist. The Daily Mail newspaper from London described it as "graffiti" and gave it the headline: "Let us spray".

Congratulations, Sandra. How exciting for you. Beautiful photos. dorothy

Congratulations!! Great news on your novel being published. Reading and answering questions in Italian, they'll understand it's not your first language.

Congratulations! Well deserved.....and I'm sure you will cope with the questions.
French Banksy in Rome and we didn't take a photo?! We will just have to come back again

That street art is amazing (as are those purple flowers)!

Sandra, where can I get a copy of your book in Italian? Is it available through itunes? Loved the English version and am keen to attempt the Italian version. Ciao Dorothy.

Hello Dorothy!
I am afraid that it is not published as an ebook in Italian, but you can order a hard copy if you like from the IBS bookstore chain here in Italy - they have an online store just like Amazon or Barnes and Noble.

Here is the link (and if you have any trouble, please let me know!)