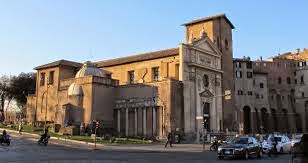 The Basilica of San Nicola in Carcere doesn't catch many eyes. Perhaps that's because it is so close to the Teatro di Marcello which really is very eye-catching and so not everyone pays much attention to the small church beside it on the bustling curve of Via del Teatro di Marcello. 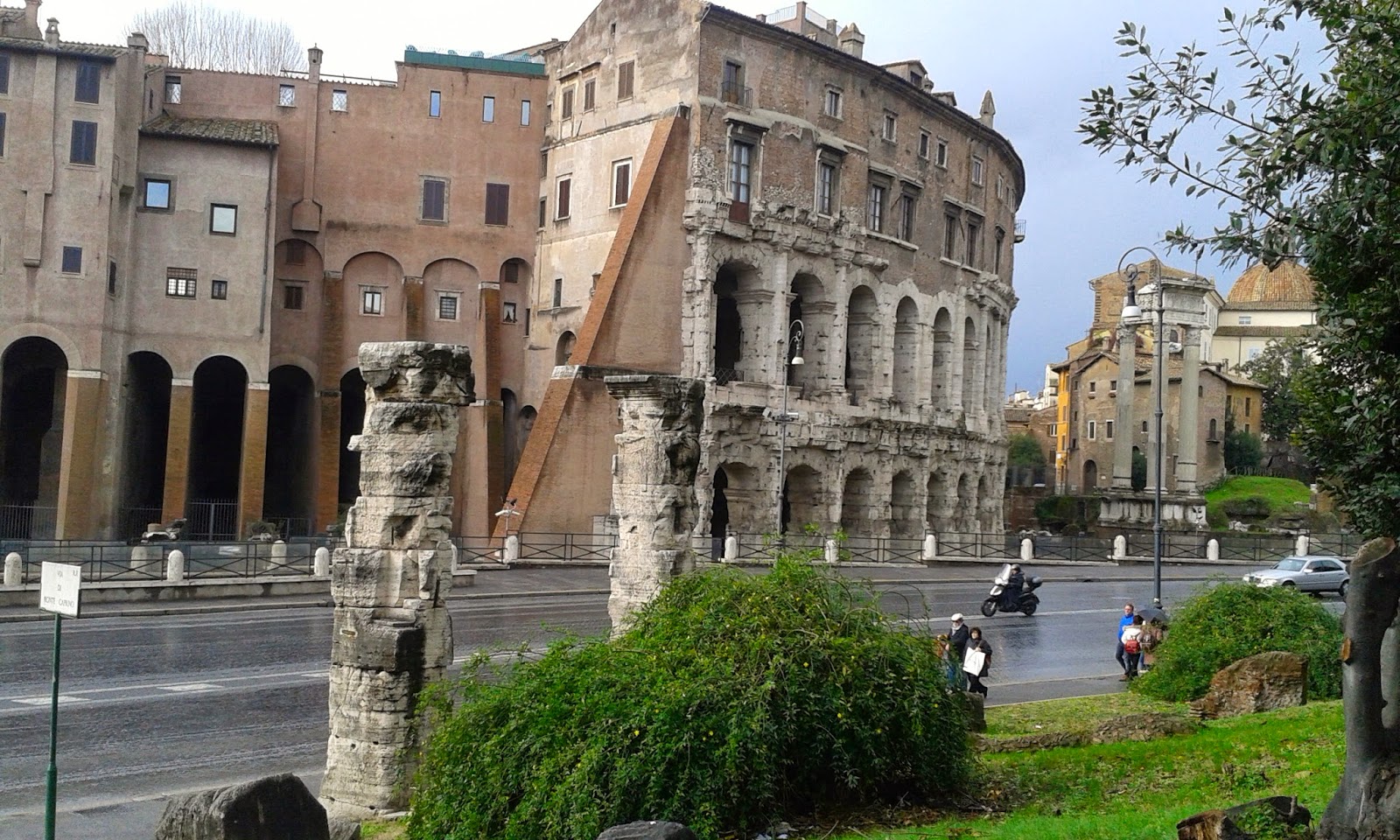 But Saturday, during my afternoon walk, I saw the doors were open and a poster promoting underground visits, so I decided to pop inside for a look.

It's an interesting, small basilica but I was especially curious to explore the excavations underneath - and for only 3 euros with no other visitors in sight, how could I lose?

It is significant that the basilica was built over three temples from the Republican-era - thus, some of Rome's oldest - with some foundations intact as well as several massive pillars that over 1,000 years later were incorporated on the south wall of today's basilica (as you can see in the top photo). 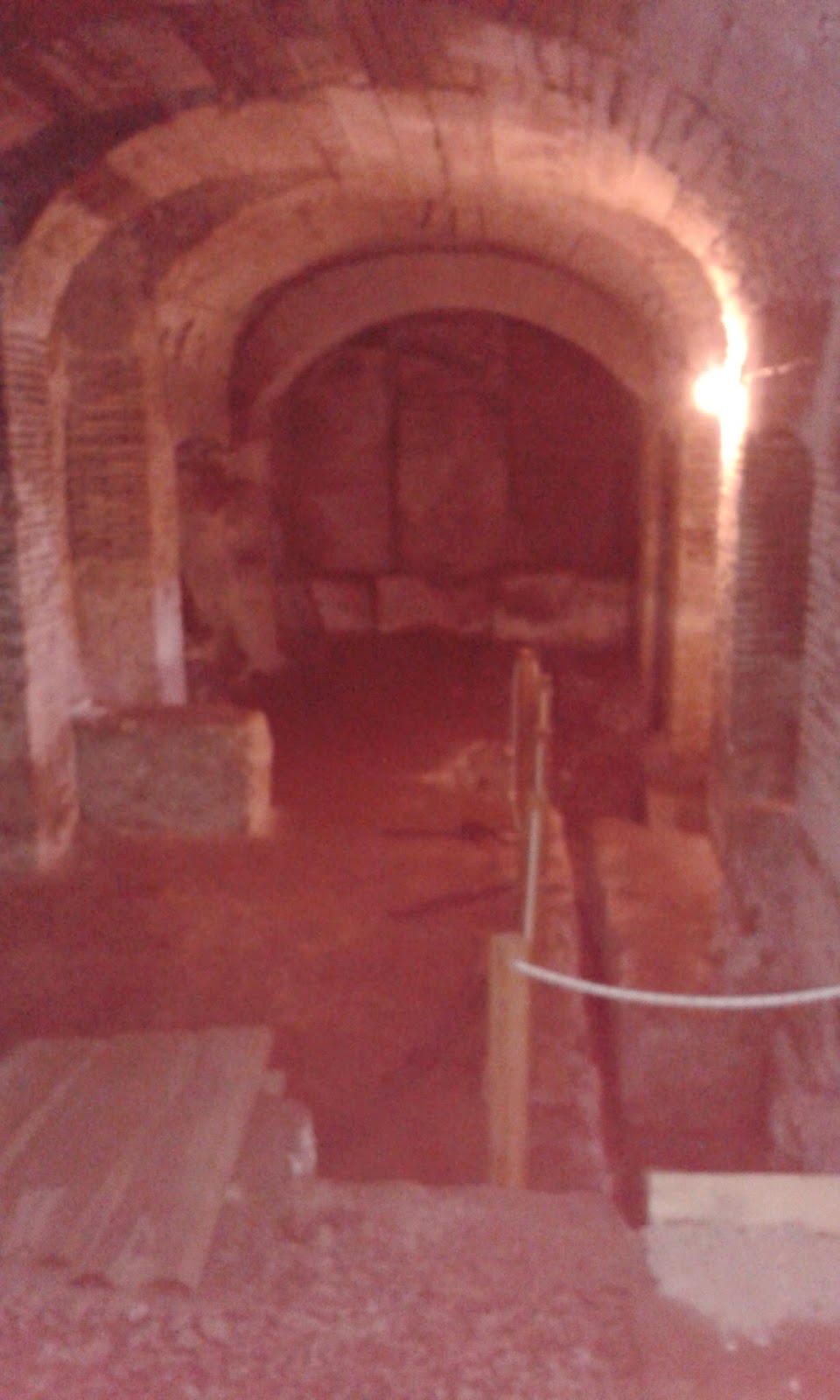 The complex was part of the Forum Holitorium, or vegetable-sellers' market, near the banks of the Tiber. To the left, facing the basilica entrance, is the temple to the two-faced god Janus and dates from 260 BC according to the literature distributed by the church.

And when I say two-faced Janus, it is not a slur. The two faces were a symbol of transition, departure and return, and this temple was especially significant because its doors were opened in times of war, and sealed in times of peace.

Very symbolic. My friend Laura, the classics scholar, tells me that Augustus put great emphasis on this temple, closing the doors after hunting down Mark Antony and before that, conspirators against Julius Caesar, to signify an end to at least those wars. 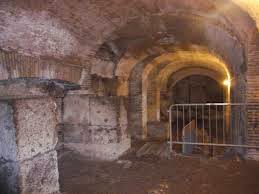 The centre temple is that of Juno as Sospita (the saviour) to differentiate this temple to the important Roman goddess from other temples to Juno around town.

And the third, small temple is the Temple of Spes, for the goddess of Hope, and dates from the First Punic War. Curiously, given the name, this is where prison cells are thought to have been constructed - giving today's basilica the name "carcere" or prison - as well as some small shops including perhaps a moneychanger. 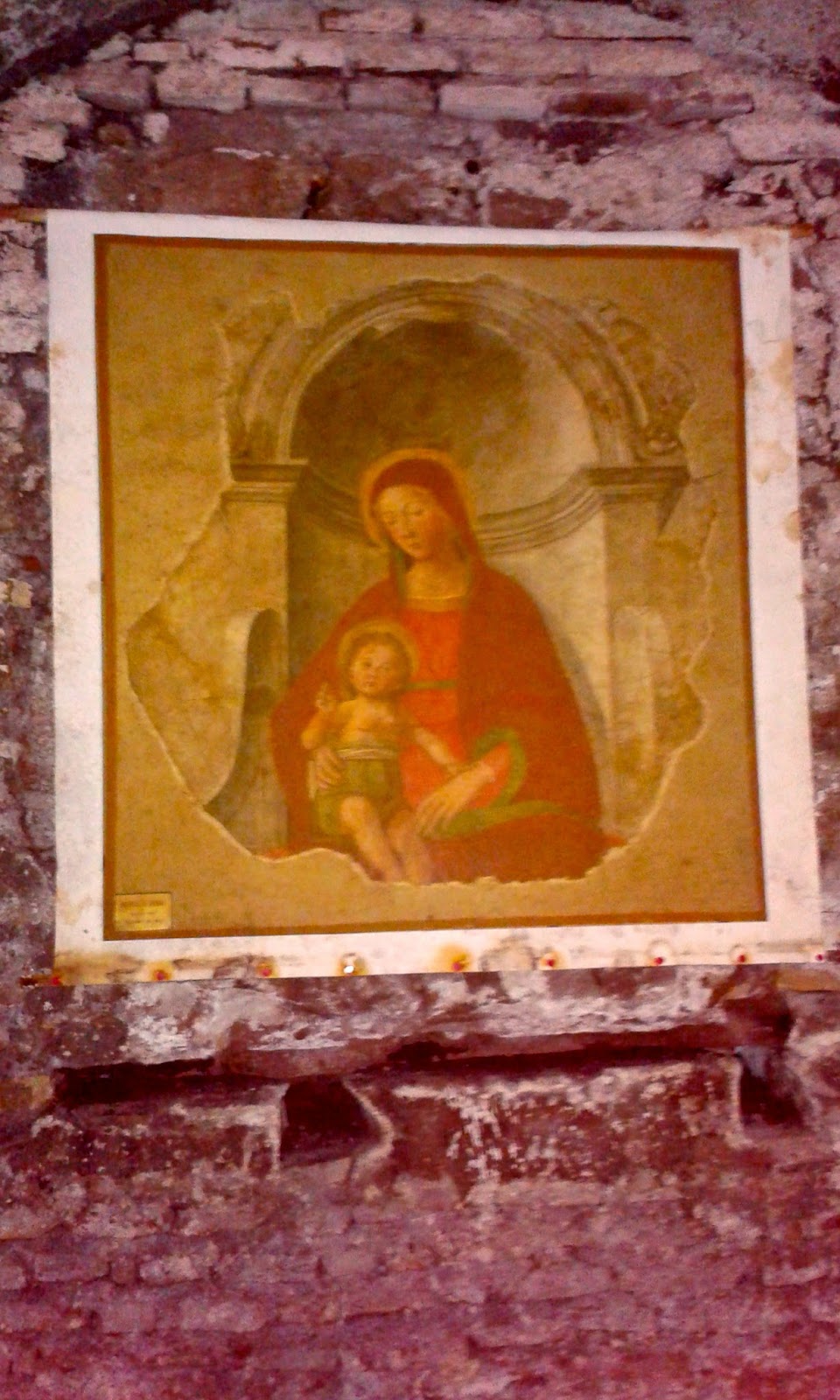 Later, in the seventh century, a Byzantine chapel was built and above it, today's basilica.

I knew a little about San Nicola, or St. Nicholas, since he is crucial to the underground church at San Clemente, near the Colosseum, where the sotterraneo is particularly well-organized and popular with tour groups.

The saint was a fourth-century bishop from what we know today to be Turkey but at that time, had Greek roots. This,  the church suggests, was likely why Rome's Greek community chose St. Nicholas for the name of the present basilica.

I felt mildly shocked - being too literal-minded - to learn that St. Nicolas was not, in fact, held in prison here, despite the name including "carcere." Culpa mia, for misinterpreting what the name of church really means. 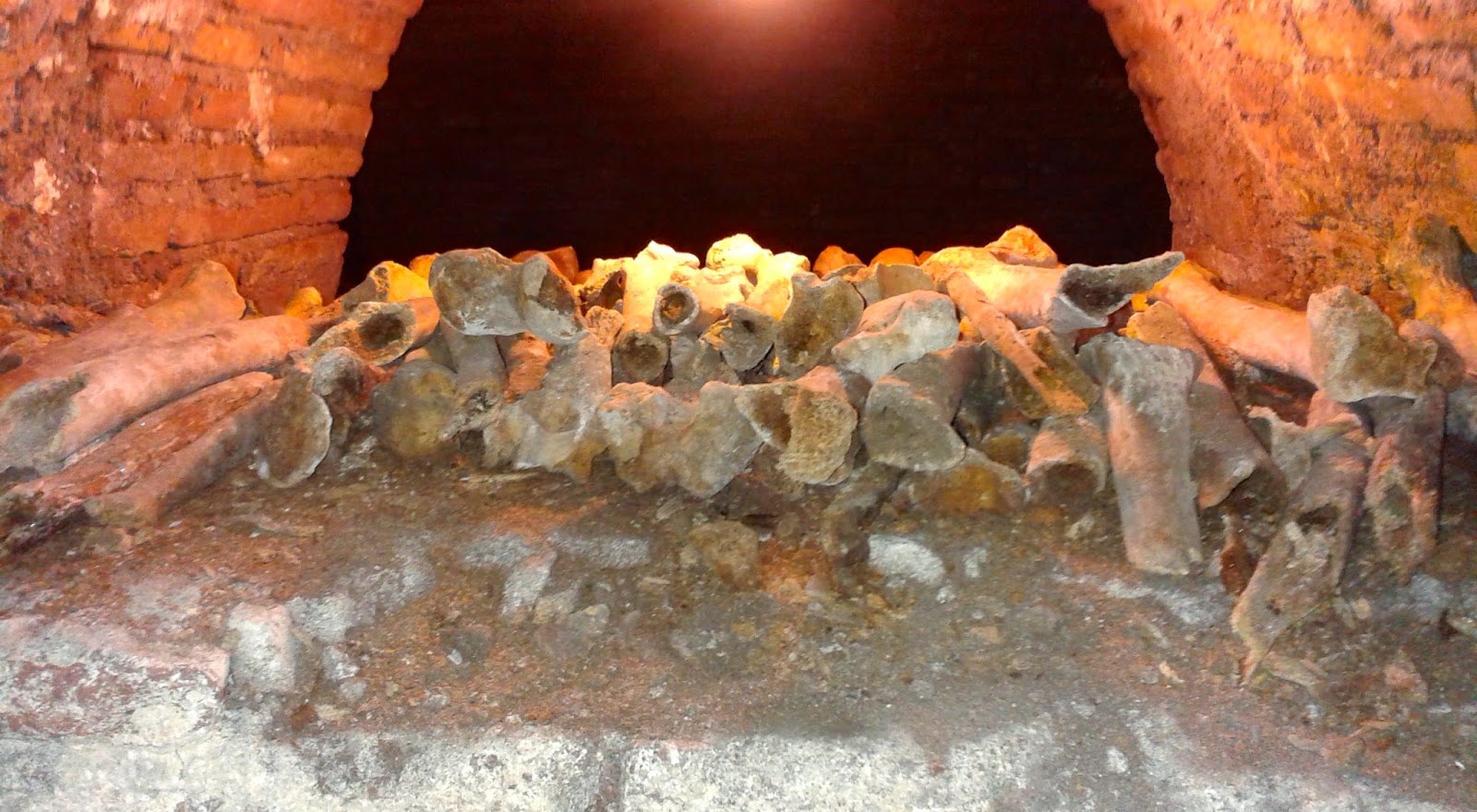 Perhaps  in keeping with the prison, or carcere, theme,  I saw lots of bones in the underground area, presumably human although not very robust so I am a bit skeptical as to their origins.

Back upstairs in the basilica, one of the bits I found especially interesting is a pillar in the right nave with extensive carving, more like medieval graffiti, really, from the ninth century. It was inscribed by the rector Anastasius, who apparently gave some animals, a vineyard, and other property to the Catholic Church as penance to save his soul. This is presumably his receipt, and I can't blame him for wanting credit. 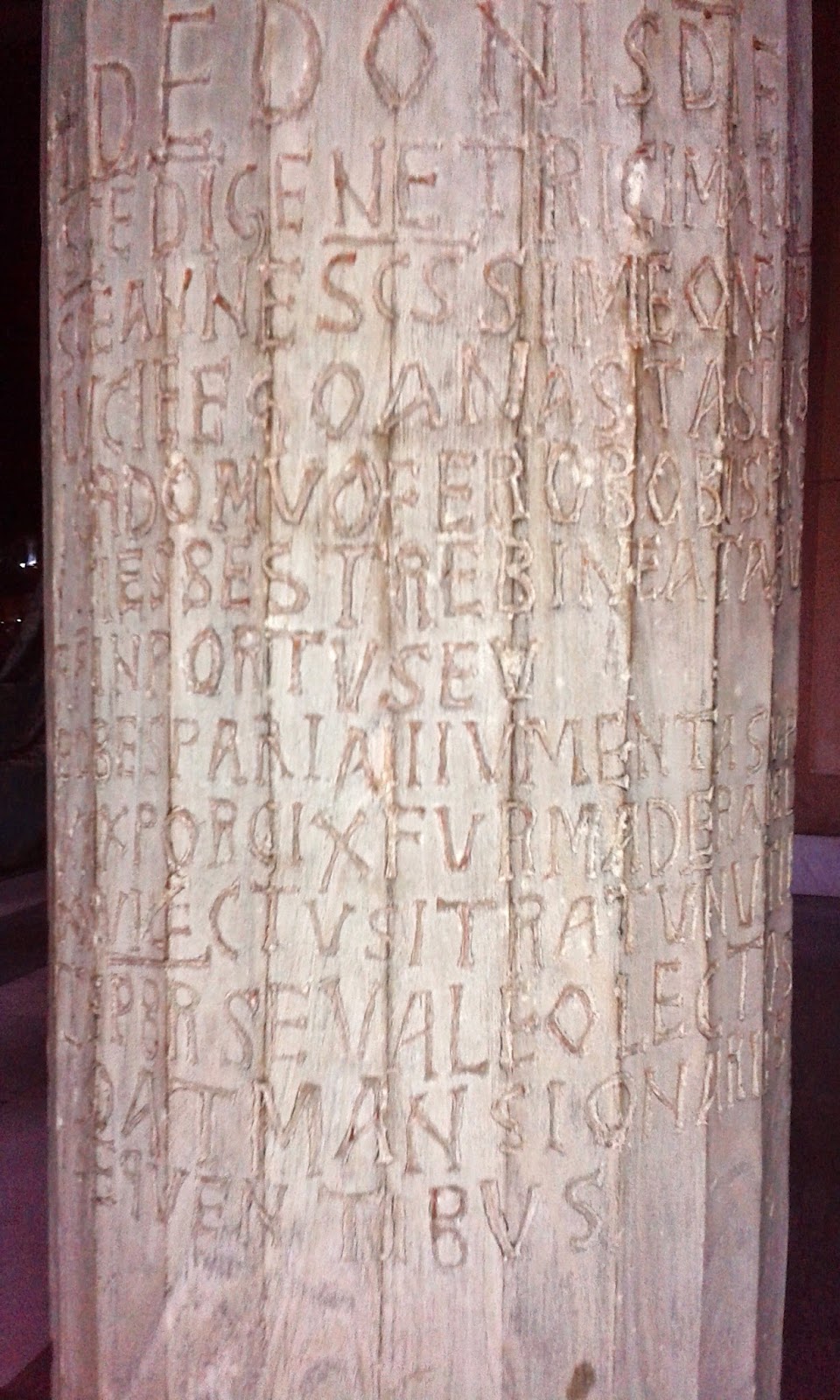 This area is amazing isn't it? So important to the daily life of ancient Rome but all most tourists see is the Bocca della Verita.

If you have time one day, S. Maria in Cosmedin has an underground area as well - the church is built on top of the Ara Maxima - the heart of one of the oldest cults of Hercules in Rome. It's where Hercules was thought to have camped while returning from his 10th labor - restling the Cattle of Geryon.

Hi Sandra, thank you so much for this wonderful post. I really enjoyed learning about the history and seeing your photos of the underground excavations. Rome is amazing both above ground and below.

Sandra - on our visit to Istanbul last fall, we took a 2-day excursion to Cappadocia - lots of early Christian history there - of which I was not really aware.

Thanks for the suggestion, William, I normally avoid that church because of the tourists but that is my loss. Perhaps it is time to visit the church itself!

Hello Kathy, Rome is pretty amazing! I tend to forget that sometimes, caught up in the daily grind, thank you for the reminder!

Doug, I really enjoyed Cappadocia and Istanbul and felt in a two week visit I did not even scratch the surface. Another country I need to return to!

We happened upon that site on our first visit to Rome. We had visited the catacombs and when we returned to Rome the church we were to go to was closed. Our guide insisted on taken us in here and knew some of the workers who were doing excavation work. Hewers able to take us to some closed off areas underground and explain the various complexes and the role they played in history. It was one of those experiences that sticks with you . . .