A Sunday stroll around Ancient Rome 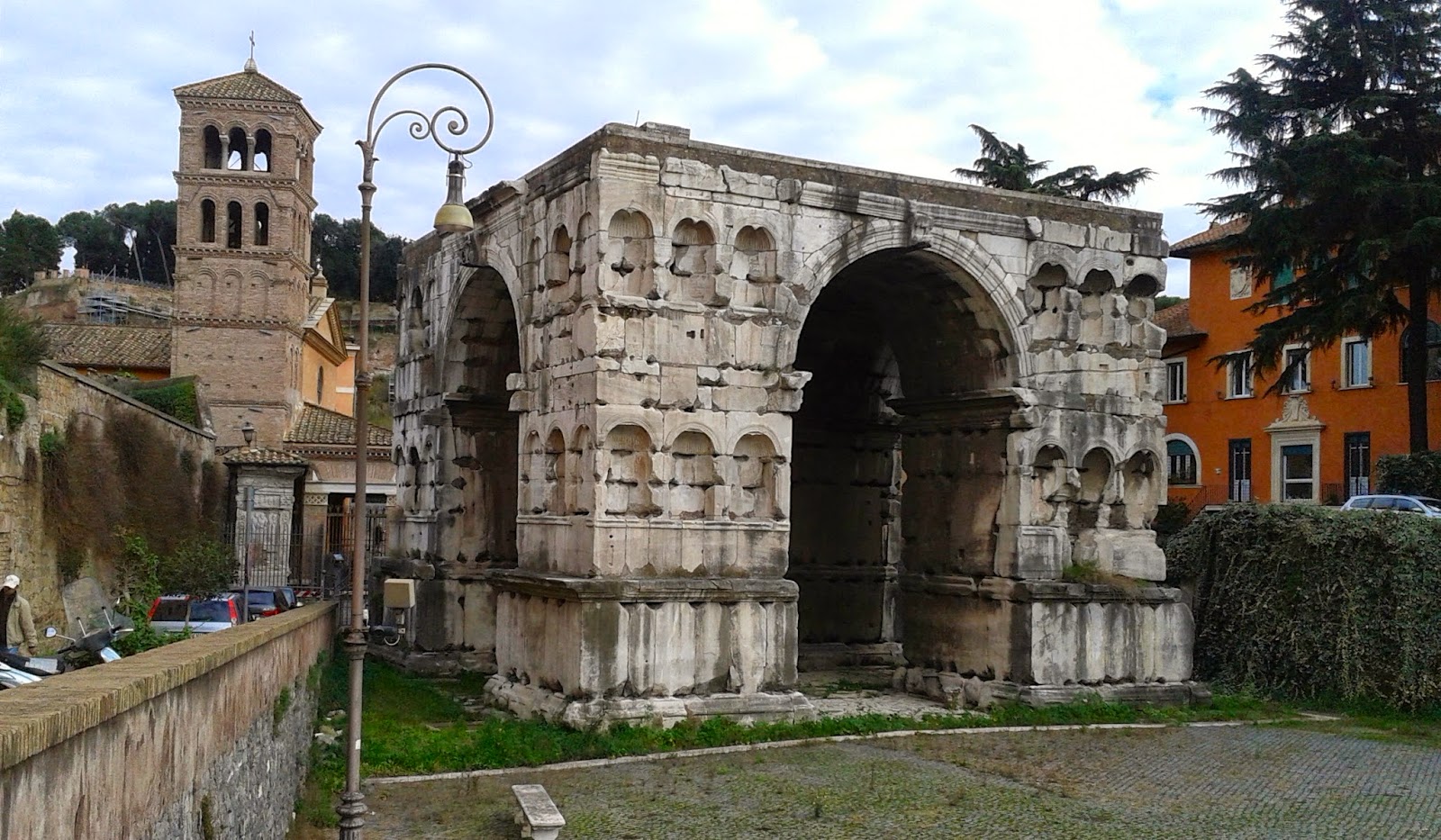 I must apologize for being such a lazy blogger but in my defence, working full time these days as a news editor and rewriter saps my writing energy.

However, I marked my third anniversary living in Rome several weeks ago, a milestone that made me even more reflective than usual, reminding me how much I enjoyed blogging.

So, today I remembered to carry my cellphone (with camera) as I took a Sunday walk on my usual route: over the Capitoline Hill, past the medieval San Giorgio in Velabro below the Palatine Hill, alongside Circus Maximus, over the Celio, and around the Colosseo. 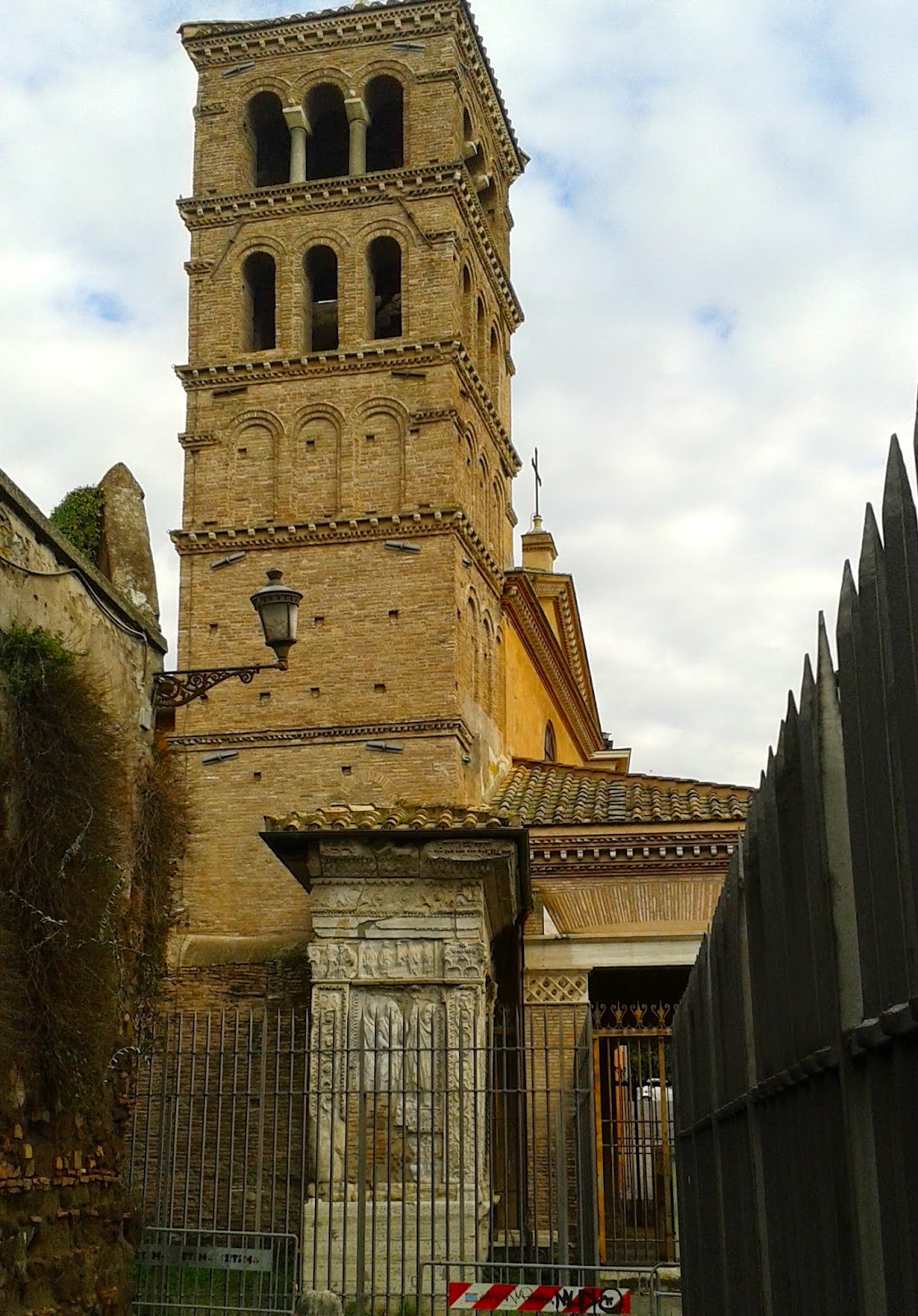 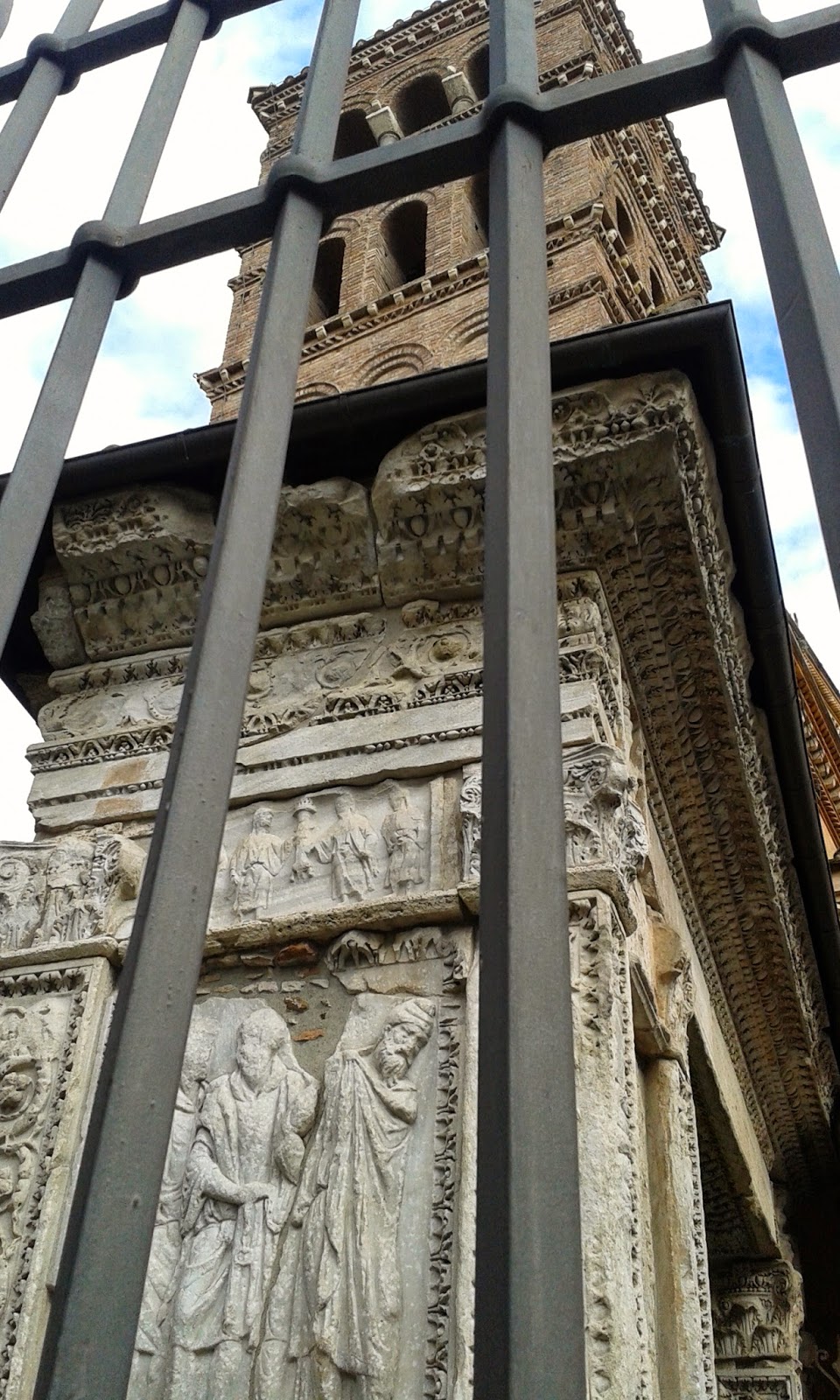 I don't always swing by San Giorgio although it is very interesting. Built in the 7th century, the small medieval sits on very low ground not too far from the Tiber and the frantic church Santa Maria in Cosmedin which hosts the Mouth of Truth. I say frantic because there is not only a major traffic intersection there, but also loads of tourists queue up to jam their hands into the old manhole cover that Audrey Hepburn and Gregory Peck made so famous in the film " Roman Holiday".

Nearby is the fourth-century Arch of Janus, the only quadrifrons triumphal arch preserved in Rome, and apparently given that name during the Renaissance. (It dominates the landscape in the top photo of this post.)

From there, I walk below the Palatine Hill where there once stood what would have been the most beautiful palazzos of Ancient Rome. 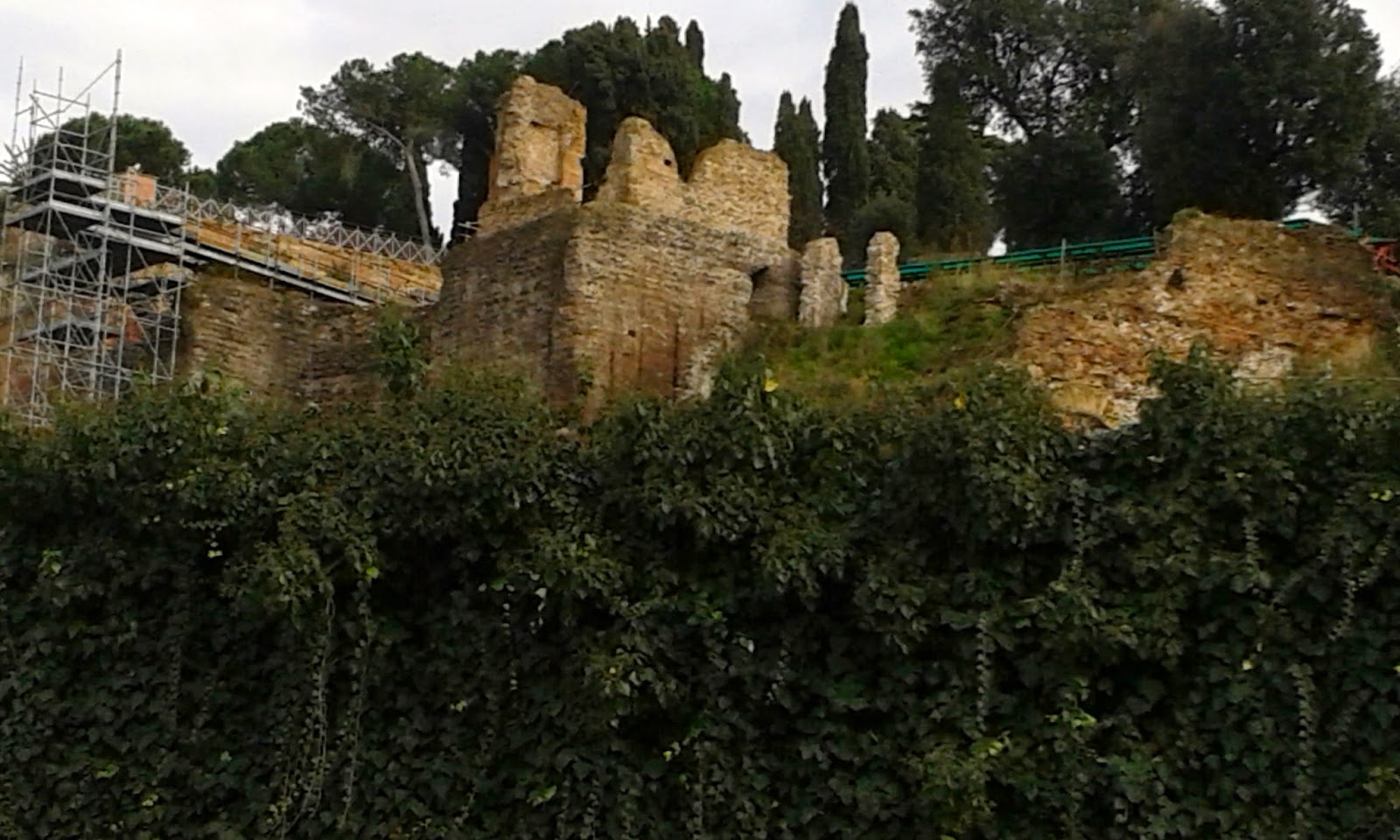 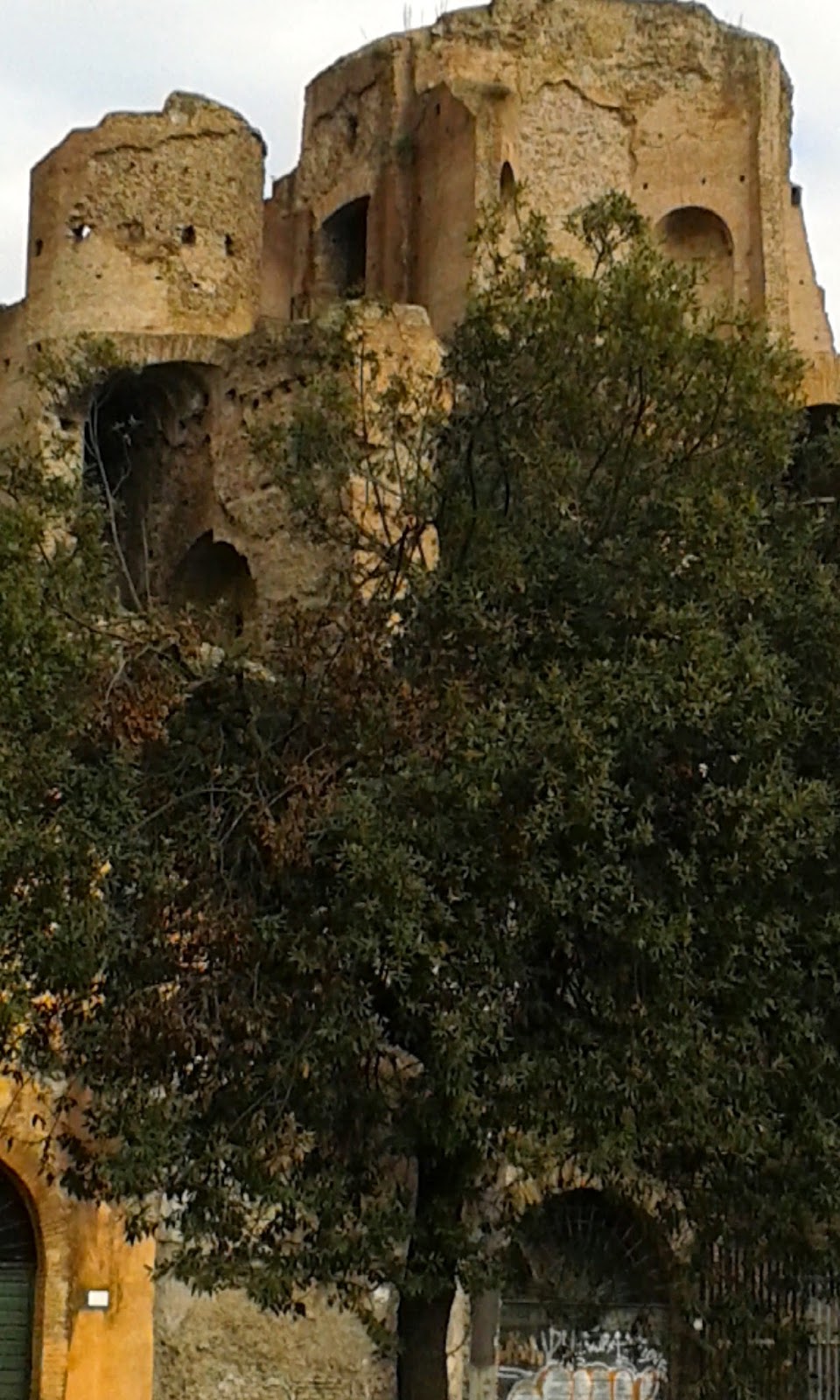 And below, Circus Maximus as the ancient site looks today, used for rock concerts, political rallies and various other events. Also, a dog park. 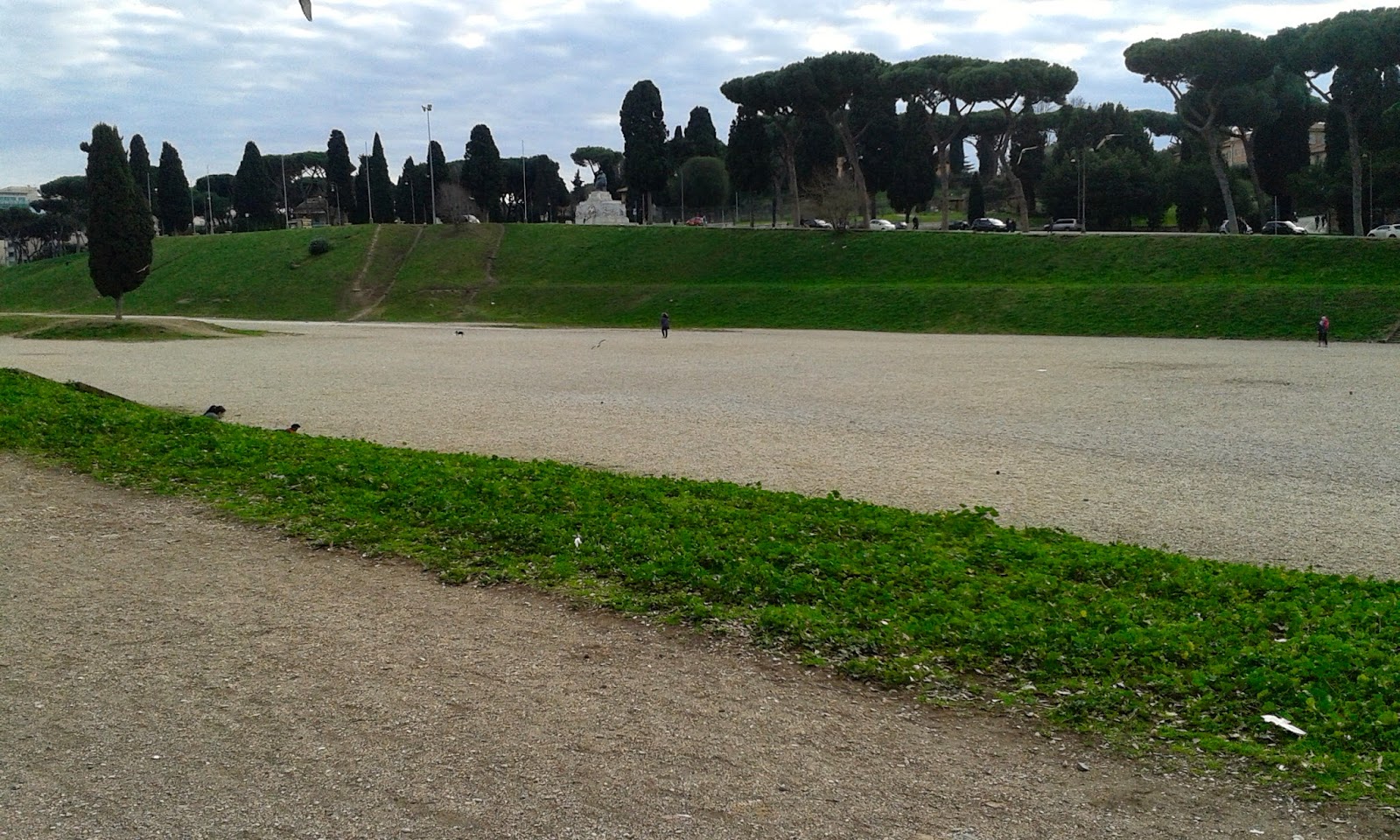 Nice to have you back, Sandra!
I'm happy to hear you are very busy!
(Happy Robbie Burns'Day: the 25th)

It's wonderful to have you back my friend! I have missed your posts.

Thanks very much, everyone!

The Forum Boarium is one of my favorite "off the beaten track" areas.

One small correction - the Quadrifrons Arch is not a triumphal arch (as incorrectly identified on various wiki pages). If it were such it would be decorated with relevant carvings as with the Arch of Titus. The other 2 surviving triumphal arches in Rome are those of Septimius Severus and Constantine.

Although no one knows its actual purpose, it may have served as a meeting point for merchants based in the Forum Boarium.

Hi Sandra, congratulations on your third year annivesary. I've missed reading your blog so I am very happy to read this post and to hear that you plan on posting again.

I am a huge fan of Roman Holiday (I even have the DVD) but can you believe I have never visited the Mouth of truth. I would probably be one of the long line of tourists to visit. It must be so wonderful to be in the presence of so many historical sights. Thanks so much for sharing.

Ditto to previous comments (except the one about arches since I don't know anything about ancient arches) How's the Italian?

Thank you, William, it really is is a relatively peaceful area - excluding, of course, the Mouth of Truth!

Hi Kathy, it's great to hear from you. I love that movie, too, and the next time you visit Rome we will queue and take each others photos there!

Hi Kathryn, the Italian is coming along, piano piano. I struggle to make small talk but my vocabulary is expanding nicely. Grammar, however, will be the death of me!

Congratulations on starting your third year - and employed! I guess the net appeared.

Thank you Anonymous….although with only 3-month temporary contracts at work, my net feels very frayed. Still, so long as I have work (and a paycheque) I must not complain.

Congratulations on your 3 year anniversary. I'm in awe and so happy for you. Each day you wake up in Bella Italia is a good day.