My First Christmas in Rome 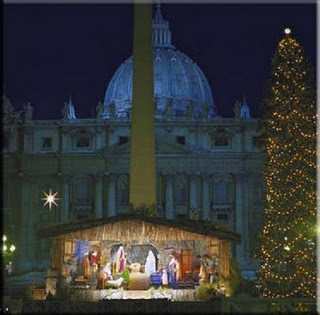 Imagine my surprise when I finally received a letter last week from the Vatican with my ticket to attend Christmas Eve Mass at St. Peter's Basilica in Rome with the Pope.  Of course, this may actually mean spending Christmas Eve with the masses in St. Peter's Square.

You see, I had written to the Vatican last summer on a whim, requesting a ticket to attend Christmas Eve Mass -- apparently, they're quite the hot ticket to nab. The response (which only took 3 months) gave me instructions on how to pick up my tickets from the Vatican offices on Dec. 24, but also warned that seating inside the basilica is somewhat limited so there's no guarantee I'll actually get inside.
Am I being a cranky Catholic? Do I really want to spend several hours standing around the very beautiful, but likely very chilly square?
I wonder what the odds are that I could actually get inside? Will I have to queue up at 4 p.m. for 10 p.m. Mass? That could be a loooong evening.
On the other hand, I have no other plans for Christmas.  Except lounging around my apartment eating cheese and drinking prosecco.
That sounds positively unCanadian, doesn't it? Fretting about weather that will be hovering around zero!! Perhaps I should show my colours -- arrive wearing a beaver-skin hat, waving the Canadian flag, and drinking rye from a flask. Well, perhaps prosecco.
Posted by sandrac at 21:47

Please oh please - if you wear a beaver-skin hat we want pictures! ;p

Don't they fill Piazza San Pietro with folding chairs for events like this? Either way, good on you for scoring a ticket!

Colleen, if I ever own one, I'll be sure to document it! And thanks for the reminder about the chairs -- I've seen them during the Papal performances on Wednesday mornings in the piazza; perhaps they set a few thousand out on Christmas Eve as well. I had better pick up a few of those little seat-and-mitten warmers just in case!

Porca miseria, Kathryn! I had forgotten about that unpleasantness at Christmas Mass. I'll be on the lookout for charging women.

Hi Sandra, that's very exciting that you scored an invitation to spend Christmas Eve with the Pope in St. Peter's Square. I attended his public mass in 2005 and I thought that experience was wonderful, so I can only imagine how extra special his Christmas Eve mass is. I am definitely looking forward to reading about your experiences, beaver-skin hat and all. :)

Thanks, Kathy! I think it will be a really interesting way to mark Christmas (with or without the beaver hat. Maybe I'll wear a tuque and look very Canadian.)

It makes me think of my younger days when I used to camp-out to buy concert tickets - always ended up being worth it though kind of boring spending all that time waiting. I think it would be a magical place to spend Xmas Eve (the flask of prosecco is a great idea!).

Sandra - inside the basilica or not this will be an opportunity of a lifetime! I'm positively green with jealousy.

Jerry, you're right: it is a wonderful opportunity and one that I should seize!

I am soooo jealous! I watch the Christmas Eve Mass every year on TV. I will be looking for you this year :)