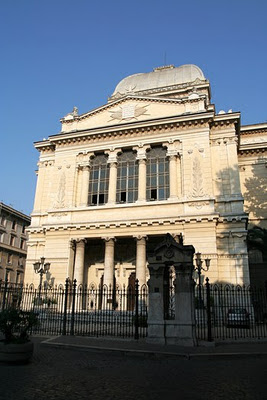 Rome's Jewish Museum, part of the Great Synagogue (Tempio Maggiore) is a fascinating look into another culture, religion, and tradition.

Rome's Jewish community is integral to the city's history, woven into its social fabric. So it seems odd that I hadn't ever visited before!

I confess it was, in part, because I was a bit intimidated and frankly, didn't realize how simple it was to visit. Go to the museum entrance, pay the 10-euro entry fee, and a guided tour (in English or Italian) that includes the Great Synagogue and the intimate Spanish Synagogue, is included.

When I mentioned this to my friend D., who is visiting from Ottawa, she was also keen to see it. We've been doing a bit of exploring of Second World War sites in Rome (including the memorial commemorating the Ardeatine massacre) so we continued with our theme.

Of course, the history of the Jewish people in Rome long predates the Second World War and the infamous roundups that occurred in the Ghetto in 1943. 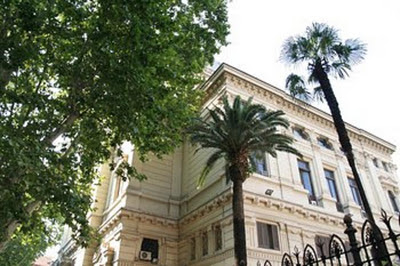 Rome has had an uninterrupted Jewish community for 20 centuries -- 2,000 years! Records and artifacts dating as far back as 1555 are included in the museum, as well as descriptions of the history of the city and its Jewish population; and explanations of cultural and religious traditions.

"In the Middle Ages, during the papal rule, Rome hosted an important Rabbinical Academy and was a center for the production of precious illuminated manuscripts. The Jewish Community counted men of science and culture in its midst, scholars who were a bridge between Latin culture and Islam.

"In 1492 the expulsion of the Jews from Spain encouraged in Rome the encounter of two important but different traditions: the local and the Sephardic from the Iberian Peninsula.

"The following years saw in Europe tensions and religious wars that caused the worsening of the conditions of the Jews of Rome. In 1553 the burning of the Talmud was ordered. from then on, and for over three centuries, possession and reading of the most important book for Jewish culture was forbidden. This contributed to the cultural (decline) of Roman Judaism.

"In 1555 Pope Paul IV Carafa ordered that all the Jews living in the State of the Church should be locked up in the ghetto: a prison-quarter, in which the Jews had to live after having lost all their civil rights. They could not own property, they couldn't choose the job they wanted, couldn't have a friendly relationship with Christians.

"The ghetto of Rome was created on the Tiber banks. The other ghettos of the Pope were opened in Ancona and Avignon. Between 3,000 and 7,000 people lived in the area, depending on the periods. The population was made up of artisans, rag-sellers and the poor, but also of bankers ( till 1682) and businessmen selling art objects and furnishing: textiles, furniture and carriages.

"In 1870, when the State of the Church fell, Rome was united with Italy and the ghetto was opened and soon after demolished. For the Roman Jews it was the beginning of the emancipation: the most visible result of this period was the construction of the Great Synagogue, inaugurated in 1904 and built on the area of the former ghetto.

"The Fascist Racial Laws of 1938 abruptly ended this period of tranquillity. In 1943 the Germans entered the City, deporting 2, 091 Roman Jews to Auschwitz.

"The community only started to recover from this grieving in the years after the war. In 1967, with the arrival of many refugees from Libya, the number of the Jews in Rome raised to about 15.000 people and it has remained stable since.

"The Roman Jews have suffered a terrible terrorist attack in 1982 - a child died and many people were injured - but have also rejoiced in 1986 for the visit to the Great Synagogue of the Pope John Paul II."

Hi Sandra, sounds like a really interesting visit and so much history. I'm glad that you were able to have a visit.

Thanks so much for sharing. Have a wonderful weekend.

Hi Kathy, perhaps next time you're in Rome we'll go together! Have a great week back at work!

Very interesting. I'd love to visit that museum too. Glad you and your friend were able to go.

Hi Sandra, this is off topic but have you read the novel "The Imperfectionists"? Set in Rome at an English language newspaper. I just finished it and thoroughly enjoyed it - recommend!

Thanks Annie for the recommendation, and the reminder! I haven't yet read the Imperfectionists; I meant to a while ago and completely forgot about it. Amazon, here I come!

I really enjoyed my visit to the Museo Ebraico di Roma. Glad you got a chance to visit. I think it helped explain some of the history of the surrounding area a bit better also.