Want to buy a palazzo in Rome? 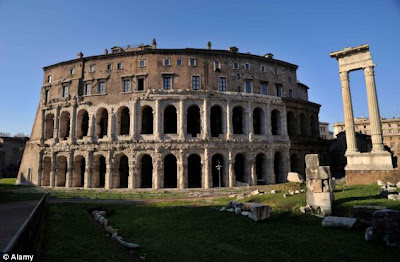 My brother Kelly is visiting from Canada (for three weeks -- gulp!) So, I haven't had any spare time to blog.

But I did come across this article from Britain's Daily Mail, which I found fascinating. By my calculations, the asking price would be about $50 million.

"A magnificent Renaissance palace grafted on to the top of an ancient Roman theatre has been put up for sale in Italy for 26-million pounds.

"The Palazzo Orsini in Rome is being sold by the family of an Anglo-American artistocrat who sheltered escaped Allied prisoners of war during the Second World War. Its asking price is thought to make it the most expensive property currently on sale in the Italian capital, and one of the most expensive in Europe.

"And you can understand why when you consider palaces like this only come on to the market once every few hundred years.

"The 11,000 sq ft property has frescoed staterooms, a ballroom, three bedrooms, two bathrooms, a library, a dining room, a terrace, a separate penthouse and cellars.

"The building, with a garden full of fountains and orange trees, is built on top of the still-standing stone and marble shell of the Theatre of Marcellus, dating from the 1st century BC,  which resembles a mini- Colosseum. 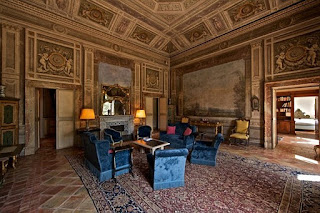 "Named after Marcus Marcellus, the nephew of Emperor Augustus, the open-air auditorium allowed 11,000 spectators to watch dramatic and singing performances.

"It was allowed to ruin over the centuries as a series of noblemen and their families moved in before the Orsini clan made it their home in the 1600s. They built a palace on top of the ruins of the ancient theatre and gave it its current name, Palazzo Orsini.

"The daughter of an American diplomat and an Anglo-Irish peer, Dame Iris Origo was born Iris Cutting in 1902 and became a marchesa after marrying an Italian aristocrat, Antonio Origo.

"Her book about her wartime experiences in Tuscany, 'War in the Val'D'Orcia, an Italian War Diary', is regarded as a classic.

"During the war she bought an estate near Siena in Tuscany with her husband and looked after refugee children and local families displaced by the fighting, as well as escaped POWs and Allied airmen who were trying to make their way through German lines.

"The diary she kept of her experiences from 1943-1944 was critically acclaimed and described by a New York Times reviewer as 'remarkably moving' when it was published in 1984 – four years before she died, aged 85.

"The palazzo, which she rented and then bought in the 1950s, has an illustrious past. Construction of the Theatre of Marcellus, which could seat 20,000 people, was begun by Julius Caesar but it was completed in 11BC by the emperor Augustus, who named it after his favourite nephew."

Makes me want to negotiate a mortgage!

Hi Sandra, and I thought the housing prices here in Los Angeles were high.:) Interesting background on Dame Iris Origo and what she and her husband did during the war. Her Diary must be so interesting. Thanks so much for sharing.

Enjoy your visit with your brother.

Sandwitch: especially with a lively family and dog!!!

Gilbert, I'm sure you'd have no trouble.

Hi Kathy, Iris Origo's book War in Val d'Orcia is really interesting, especially for anyone interested in Tuscany (and Italy and WWII, etc.) I'd highly recommend it!

No pool? Seems a bit steep! I hope Kelly is enjoying Italy. Aloha from Maui.

Happy New Year! I hope you are enjoying your visit with your brother. Are you still taking classes? If so, how is it going?

Hi Kathryn! Hope you're having a great holiday in Maui.

Happy New Year to you, too Girasoli. I am still taking Italiano language classes (although I took 2 weeks off while my brother is here -- yikes, I'm going to forget everything I've learned!)I really am enjoying the classes, though -- can't wait to get back to them.

Perhaps if we all empty out our change jar . . .