Just another day at the Vatican 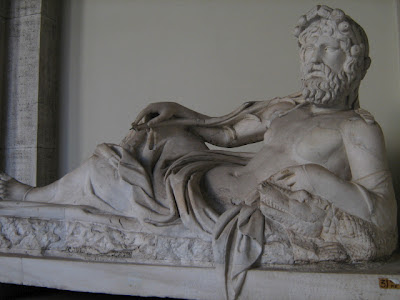 Friday morning, I cut Italian classes and headed to the Vatican. On legitimate business, I might add. I had finally -- after more than a month of nagging, wheedling, and cajoling -- snagged an interview with a senior official in the Vatican Secret Archives, as well as a tour. 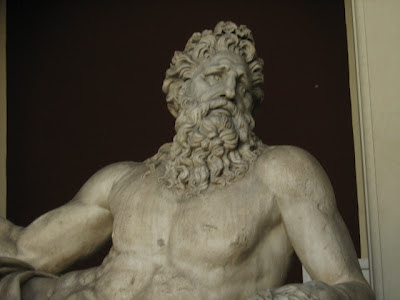 This was all done in the cause of writing a feature story for the Italian news agency in advance of a fascinating exhibition coming up at the end of February. In this exhibition, the Vatican will unveil 100 documents representing a broad cross-section of subject matter, regions, and time periods.

Although the Vatican has kept records from its earliest days, it only organized these into a formal archive 400 years ago. To mark the occasion, it has organized the exhibition "Lux in Arcana" which begins Feb. 29 at Rome's Capitoline Museums.(The name of the exhibition roughly translates as shining light on arcane or unknown matters.)

I wasn't allowed to take photos in the archives, which were packed with fascinating information but looked very ordinary. Roughly 80 kilometers of shelving running under the Vatican's Apostolic Palace. Nothing glamorous or high-tech about it, I'm afraid.

I did have the opportunity to admire a 1,000-year-old document that is being carefully restored -- and it was gorgeous! Perfect gold script on a royal red background. I couldn't understand a word, of course, and I was told the subject of the document was terribly mundane -- but it was still stunning. 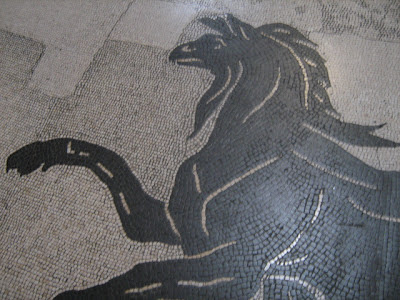 And since I was out at the Vatican anyway, I decided to spend a few hours in the museum which was curiously busy. Still, I enjoyed myself. As always. And, took a few photos, including the dour river god above; and one of the Vatican tennis courts, which seem to be on the roof of a building adjacent to the Museums. 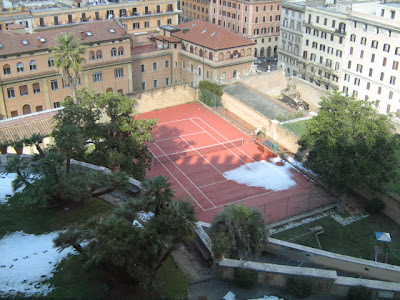 Sandra, I love reading about what you are doing now and so excited that you are finding opportunities to write and work. I hope this leads to more. I am so curious as to how you got the assignment with the newspaper. It seems like it would be hard just to relocate and work your way in so quickly. Are you feeling Roman yet?

Hi Sandra, how wonderful to get an interview with a high senior official and a tour of the Vatican Secret Archives. It must have been amazing and then to see a 1,000 year old document. Hours in the Vatican Museum also sounds wonderful. Looks like snow in your last photo.

Thank you so much for taking the time to share. I hope Rome is treating you well. Have a great weekend.

Interesting! Did you see a lot of red hats on men there?

Jane, I am feeling more settled, but it's a struggle financially. I'm starting my 8th week of Italian language school (which is expensive but a great investment) and finding freelance writing assignments. But these don't pay a lot so I put a lot of energy into the hunt for full-time work. Please keep your fingers crossed for me!!

Hi Kathy! It really was an amazing opportunity; academics can have access to some documents if they have a legitimate reason -- but few people can actually get inside the Archives themselves!

As for the snow, there are still a few patches around Rome's centre, usually in shaded areas. But this week, temperatures are rising so I suspect even in the shade, the little bits of remaining snow will disappear fast.

Hi menehune, happily I was at the Vatican the day before the big swearing-in (or whatever the ceremony is called for inducting new cardinals.) It was probably quite the scene Saturday.

Hi Sandra,
I'm so happy to discover your blog via Slowtrav. Congratulations, and admiration too, on taking the momentous step and living in Rome. I have a real fondness for the city but struggle with the language! I'd love to hear more about your classroom experiences.
Hello from very sunny Australia :)
Liz Lloyd

Hi Liz, thanks for stopping by! And thank you for the suggestion of a blog topic -- I really haven't written much about my language school and it's time that was remedied.

Holy crow, 80 kms of shelving?!?! That's a lot of secret documents! What a cool adventure, even the subject matter was mundane...or maybe it was really the lurid tale of an assassination plot and they just didn't want you to know! LOL!!

This sounds like fun! Did you read the novel, Another Roadside Attraction? One of the characters penetrates the secret archives and art collections of the Vatican (no idea how accurate it was, but it was fun to read).

I didn't know they had tennis courts either!

Anne, you definitely have the mind of a writer!

Hi Annie, I remember seeing that novel on the shelves (the title was intriguing) but I never actually read it. Now, I'll have to look it up!