Louis Vuitton, an historic Roman cinema, and me. 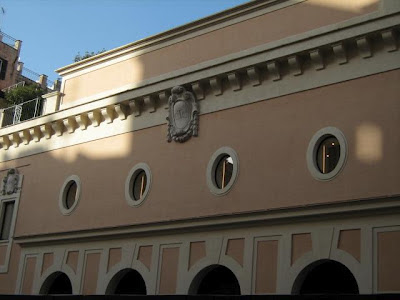 The redesign of an historic movie theater in central Rome for Louis Vuitton gave me an interesting opportunity to interview the architect on the project for the Italian news agency ANSA. I don't normally spend a great deal of time around designers and their shops, but this project was too interesting to miss.

And the glamorous world of Rome's Cinecitta film studio -- home of Italian cinema that enjoyed its heyday in the 1960s -- is precisely the atmosphere Marino has tried capture in the Etoile Maison boutique, which opened a few weeks in Rome's oldest cinema. (Photo below from Vuitton) 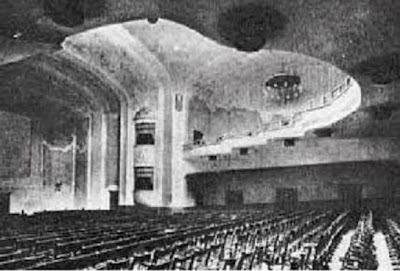 “This project was so fun,” the architect enthused in a recent interview from New York. “I loved the fact this was an old movie theater; so, I proposed that we show movies....and keep with the whole movie theme from Rome at that time.

“We drew on the karma of the space...and that was the cinema.”

Constructed in 1907 in the historic Piazza San Lorenzo in Lucina in central Rome, the Etoile was the city's first cinema and opened under the name the Lux and Umbra. The structure was replaced in 1917 by the Corso cinema, with a design inspired by the Art Nouveau movement. However, the facade created such controversy that the architect, Marcello Piacentini, was forced to replace it at his own cost with a neo-classical design.

The cinema premiered such classics as the 1949 neo-realism film “Bitter Rice” by Giuseppe De Santis; later, ceremonies and cultural events also took place there. In 1970, it became the Etoile which continued until the cinema was finally closed in 1991. (Photo below of Marino from the architect himself.) 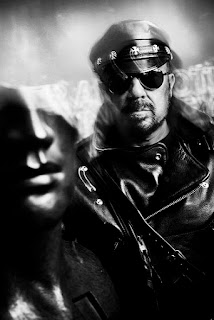 Marino, who founded his architectural practice in 1978 with such early clients as Andy Warhol and Yves St Laurent, drew inspiration for the Etoile project from the cinema's Roman history, Italian movie icons such as Mastroianni, and the Cinecitta film studio.

But he also drew from the Baroque art movement, giving it a modern twist. The Baroque style, which found its home in Rome in about 1600 and was made famous by such masters as Bernini, featured an exaggerated style and motion that produced a great sense of drama and grandeur. That has been reproduced in the Etoile Maison.

“I created an incredibly complex, elliptical staircase,” inspired by the Baroque designs, explained Marino, whose personal collection of bronze statues from the period was exhibited by London's Wallace Collection in 2010. “I mean, here we are in Rome! Where else can an modern architect get to do...off-the-charts Baroque?

“This really was an opportunity to try something different.”

Marino and a team of architects worked for more than two years on the design of the Etoile Maison, blending wardrobes, whimsy, and a bit of witchcraft to create an atmosphere they hoped would be pleasing to shoppers -- while at the same time, avoiding problems with Rome's municipal authorities.

Strict regulations govern what alterations can -- and mostly, cannot -- be made to the exteriors of Rome's historic structures.

“We weren't allowed to make any changes to the facade, so it is what it was,” said Marino. This means that what today's visitor sees is the simple, clean exterior of an historic cinema, he added.
Posted by sandrac at 13:18

Interesting, but I'm pretty sure I saw a movie there in 1994.

Hi Andrew, thanks for stopping by! The information about the cinema's history came from the Louis Vuitton organization, and I believe it said that after the cinema Etoile officially closed in 1991, the space was used for various civic events -- which certainly might have included films as you remember. Maybe retrospectives of certain directors, or cult film showings?

Hi Sandra, I enjoyed learning about this historic movie theater, about the cinema history in Rome and about the architect's creative thoughts on his work. It is so interesting.

Oh, this is wonderful to know. Loved the article! I've wondered what they were doing to this building. When I've been to my favorite piazza, the construction noise has been distracting. I'll have to step in and check it out!
Grazie!!!
Heidi

Hi Kathy, it is an interesting building -- not extremely old by Roman standards, but still....I'll have to go in sometime and see what the architect has done with it as he had some very cool ideas.

Hello Heidi, it is a lovely piazza isn't it? But all the scaffolding detracted from the beauty. Hopefully, it looks better now.

How interesting! Thanks for sharing this. I keep seeing photos of all the snow in Italy - hope you're enjoying it and keeping warm.

Annie, the snow has been incredible -- I'm sure you've seen the photos from Venice, which left me gobsmacked!

But hopefully, the crazy weather has passed here and spring will be soon on the way!

The Cinema Etoile closed in December 2000.