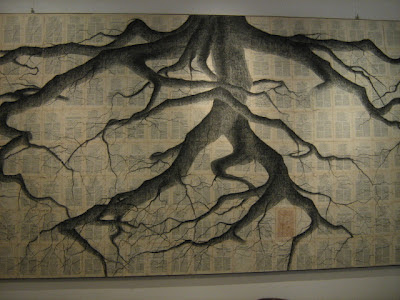 My friend Michele has opened a new art gallery in Rome, RvB Arts, which is dedicated to young, new, accessible artists (accessible in that the prices for their works are still very reasonable and therefore, accessible to people of smaller budgets!)

At a vernissage last night, I met a couple of very interesting young artists who I think are really going places.

The above work is by a young Roman artist who calls himself Tindar. Although he studied business in Milan, after he finished university he chucked the business world (against his parents' wishes) to become an artist. He focuses on pencil drawings of tree roots against text.

One of the most interesting I found was a drawing against the texts of Dante's Divine Comedy. Another,  against Bob Dylan scores. 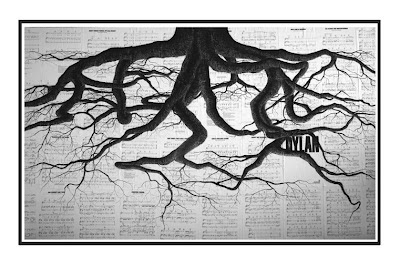 Christina Thwaites, who is shown below with her work "Lady with a boa", was born in England 32 years ago, and now lives near Rome in the village of Toffia in the Sabina region. Her painting skills were developed in Italy where she was taught by artist Albert Parres, who she says was extraordinarily influential. 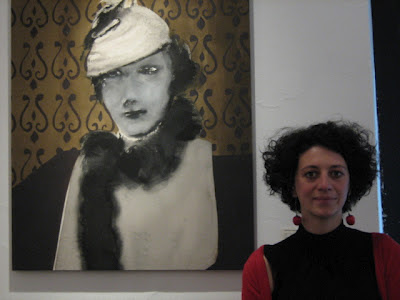 Christina predominantly paints people, based on photos. For this exhibition at RvB Arts, she used many images of her family, although she says she intends the images to be more universal, open to interpretation and commentary.  "I use photographs or newspaper cuts as a starting point – sometimes I find them, sometimes I take my own photos," she says.

"My reasons for painting are to do with a need for physical involvement in the work and I cannot gain this in the same way through photography. 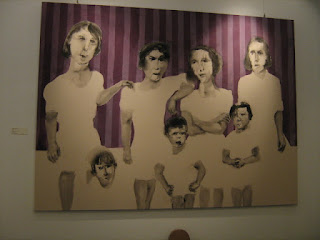 "I have painted a lot from old family photographs, given to me by my grandparents – I like the costumes they wear and the way they pose for the camera – the individuals are only symbols of an era to others but I can see familiar faces and there are stories which accompany each photo."

Hi Sandra, thank you for this wonderful post and introducing us to two very talented artists. Their paintings are very beautiful.

Thank you so much for sharing. Have a wonderful week.

Very cool, I like both of their work a lot!