A Mausoleum by Moonlight 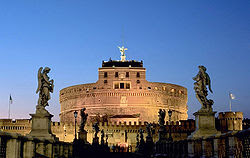 Imagine my surprise on discovering that the Castel  Sant'Angelo, originally built as a mausoleum for the great emperor Hadrian, hides some wonderful art within its fortress walls.

A moonlight visit to the mausoleum revealed that, as well as the famous passetto which connects the Vatican with the Castel so that popes under siege could flee to safety within the fortress. 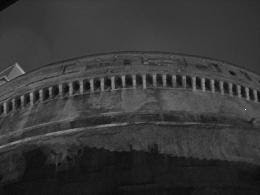 During the summer, Castel Sant'Angelo offers late-night tours that open areas usually closed, such as the passetto, so I was able to pretend that I was Pope Clement VII  who, with 1,000 friends, fled along the elevated, fortified walkway to safety during the Sack of Rome in 1527.

(The passetto more recently gained infamy in the  Dan Brown novel and subsequent movie Angels and Demons, as the link between the Vatican and the assassin's lair.) In truth, much of the great art secreted in the Castel is open to the public; I just hadn't realized that Clement VII's beautifully frescoed bathroom was there, or that Pope Paul III's bedroom and receiving chambers were so gorgeous.

Pope Paul III, born as Alessandro Farnese, was pope from 1534 to 1549 and created a set of beautiful apartments decorated by such names as Antonio da Sangallo the Elder, Pierin del Vaga, Marco da Siena, and Pellegrino Tibaldi.  I also found a Luca Signorelli there.

Most of this was explained to me by my Roman-born friend Laura, an art scholar who is polishing her English to become a specialized tour guide. 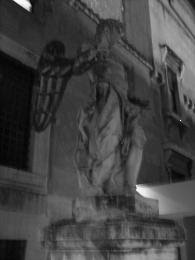 Built by emperor Hadrian on the right bank of the Tiber between 135 AD and 139 AD, the mausoleum contained urns with the ashes of Hadrian's family. However, the tomb (and many of its contents) were lost after it was converted into a  military fortress in 401 and when it was later built into Rome's Aurelian Walls by Flavius Augustus Honorius. 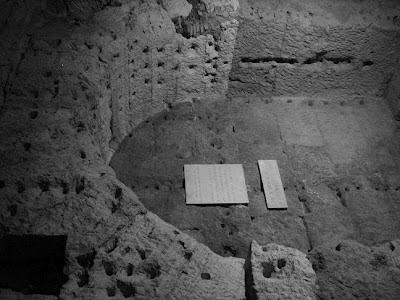 Beginning in the 1300s, a series of popes converted the structure into a castle. Pope Nicholas III connected the castle to the Vatican with the passetto, which proved very useful as the fortress was the refuge of Pope Clement VII from the siege of Charles V's Landsknechte during the Sack of Rome in 1527. 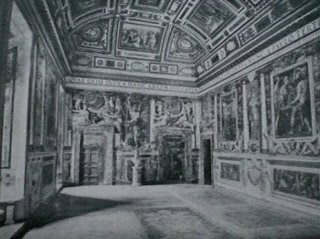 It's no longer possible to take photos inside the papal apartments, but these old shots show the chapel built by Leo X with a Madonna by Raffaello da Montelupo. Musical concerts are now held here. 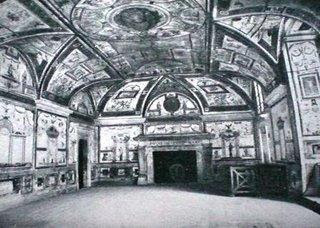 Shame they only do those evening tours in the summer! If Laura wants soem practice we'd be more than happy to serve as Guniea pigs!

It never ceases to amaze me how much incredible art there is hidden away in Rome. People rush by the buildings every day and miss out on so much . . .

At this rate I'll be banging on every door we pass to try and see what is squirreled away inside.

Hi Sandra, I have watched Angels and Demons about a dozen times and never tire of it. What a cool experience to be able to walk on the passetto. Such interesting history and the art looks beautiful in the Castel.

Thanks so much for sharing. Have a wonderful week.

Sandra, I am an avid reader of your blog. You have given me so many ideas for my short 4-day visit from 24 september. I am in Perugia til then. Would your friend be willing to do a little tour with me? Is your book published yet? Dorothy

Jerry, I'm discovering that so many of Rome's treasures are hidden in plain sight!!! There's just too many of them to get to. (But I would love to see what would happen if you started banging on doors to see what's hidden inside)

Hi Kathy - I'm the same, I can't resist the scenery in the film! I hope your trip planning is going well, I can't wait to see your pix from Argentina!

Hi Dorothy, I hope you're enjoying Perugia!! I was there a few weeks ago and hated to leave. My novel will be published in the next week or two, and I'll certainly be blogging about it - thanks for asking.

I can ask Laura if she feels up for a private tour, what did you have in mind? (If you want to post a message here, I can see it without publishing it.)

Fascinating! I love the idea of an evening tour. And a frescoed bathroom! Rome is such an amazing place - so glad you are there to share it with all of us!