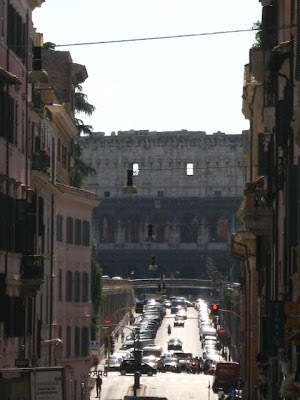 I've finally found a new apartment, but I'm going to hate moving out of Rome's Monti district. Here's an article I recently wrote for ANSA about some of the things I love about Monti.

Rome's popular Monti neighbourhood lies at the intersection of hip and historical.

One of the city's oldest quarters, tucked in between the hectic Via Cavour and Via Nazionale and lying alongside the Forum, Monti today is one of the city's most vibrant areas.

Artists, fashion designers, and jewelry-makers have all been drawn to the Monti scene, where their shops nestle in beside wood-workers, picture-frame makers, and  motorcycle repair shops. 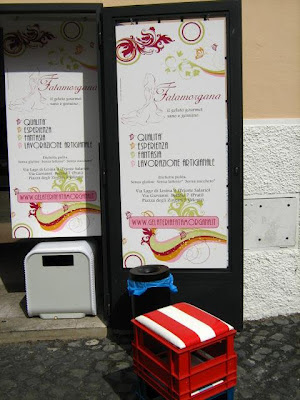 Adding to the buzz in the neighbourhood is a range of cafes, casual and higher-end restaurants, bars, bakeries - everything a visitor or a resident could want.

It all makes Monti a fascinating neighbourhood for pavement-pounding explorers, says food historian Katie Parla, who has lived in the area for several years.

'Monti isn't super monument-heavy, so it's more interesting to walk around and absorb some of the atmosphere', says Parla, who frequently writes for the New York  Times.

And when it's time to put your feet up, she suggests La Barrique, a wine bar with a full kitchen on Via del Boschetto 41, near Via Nazionale.

'Monti has an incredible density of great wine bars...but La Barrique is certainly at the top of that list. It's extremely unpretentious and moderately priced'.

For people-watching, you can't beat the cozy, paved Piazza della Madonna dei Monti, where people lounge around the large, two-tiered Renaissance fountain or  sip espresso at one of the cafes in the square. 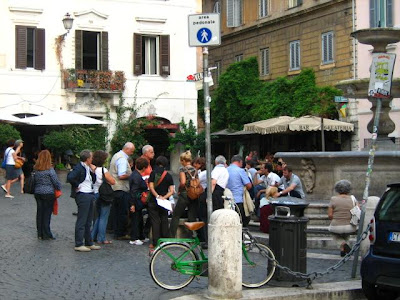 Once a working-class neighbourhood, the area is becoming more posh and hipster - and more interesting to visitors looking for an authentic Roman experience.

'Monti appeals to seasoned travellers....definitely it has nightlife and is busy at times, but it still has a neighbourhood feel,' says Parla.

'You get that characteristic street life that is fantastic.'

Around the corner from the square is the lovely and popular Madonna dei Monti church, designed by the 16th-century architect and sculptor Giacomo della Porta.

Indeed, although Monti doesn't boast as many beautiful fountains or great monuments as other parts of  Rome, it still has a few gems tucked inside its bustling borders. 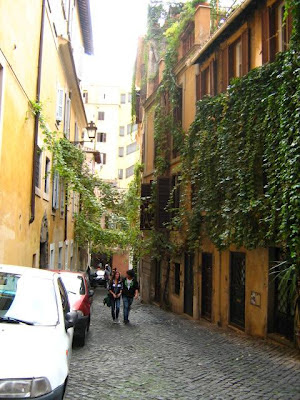 Consider some of its other notable neighbourhood churches. Santa Maria Maggiore, for example, is one of the city’s four great papal basilicas and looms over the district’s east side.

The western edge of Monti, known in ancient times as Subura, is formed by a high stone wall along Via Tor de’ Conti, which follows the contours of the forums of Augustus, Vespasian, Trajan, and Nerva.

The wall was built to protect Imperial Rome from the ancient slum, where Julius Caesar is said to have grown up.

Indeed, Monti remained a rather rough, unpopular neighbourhood until Rome became the capital of a united Italy in 1871.

After that, such wide traffic-friendly boulevards as Via Nazionale and Via Cavour were developed, and in the 1930s a whole section of the district - as well as parts of the Imperial forums -  were bulldozed to make way for Mussolini’s grandiose Via dei Fori Imperiali.

Sandra, thank you for putting Monti on my radar. I need to plan a trip to Rome, it has been too long since my last visit.

Congratulations on your new apartment! I hope you will give us a photo tour of it and of your new neighborhood.

Sandra, I really enjoyed reading this as it gives me a better understanding of Monti and adds to my enthusiasm for next summer. Thanks.

Sounds like a great neighbourhood - I can see why you're sad to leave it.

Another move?
I can't wait to see where you will land (as I am humming the Jefferson's song... 'moving on up~> to the east side')

Thanks, Susie! That will be my next blog post, and I'll do a little more research so I can speak more knowledgeably about my new 'hood.

Jane, I think you're really going to enjoy staying in Monti!

Hi Jerry, Monti is a great neighourbood - but I hear the food (and food markets) are great in my new neighbourhood as well.

Sandi, I miss that show! I kind of wish that I was moving into "a deluxe apartment in the sky!" But so long as I'm living in Rome, it'll be deluxe enough.

Hi Sandra, this is a wonderful article about Rome's Monti neighborhood and your description makes me want to see and experience it. All your photos of the area are beautiful, and that last one with the vines, really cool. Thanks so much for sharing and I look forward to hearing about your new neighborhood.

Thanks, Kathy! Maybe on your next trip to Rome you'll want to stay in Monti - I highly recommend it!

I hope that you also have a great week.

A great article! It does sounds like a fantastic neighborhood - I can't wait to hear about where you are moving next!

Thanks, Annie - stay tuned! I have some photos to put up.

On our very first visit to Rome, my mom and I spent our last night at Hotel Italia on Via Venezia. We had a lovely stroll around on that final evening, really enjoyed the neighbourhood! Palazzo Viminale (sp?) seemed so very grand!

Can't wait to see photos of your new neighbourhood!!