A region of Italy that I'd like to know better: Le Marche 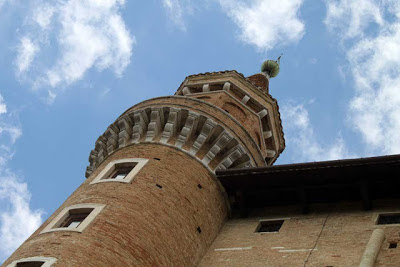 Although I've only visited the Italian region of Le Marche once, and only the city of Urbino (the above photo is one of the towers in the Ducal palace) I'd love to know it better. I recently interviewed my friend Giulia Savini, who lives near Urbino, about the region's appeal (these are also her photos.)

It seems that visitors to Italy seeking an authentic experience, away from tour buses and camera flashes, are turning to the stunning beauty of Le Marche region. Below is a photo of the hilltop town of Mondavio. 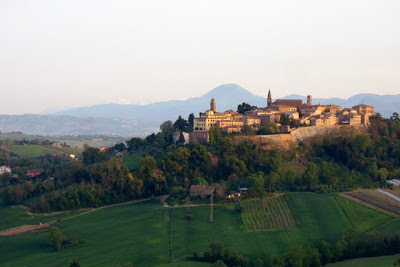 Stretching from the 6,000-foot peaks of central Italy's Apennines on the border of Tuscany and Umbria, Le Marche reaches across to the Adriatic sea.

Its land is hilly and even mountainous, with plenty of agricultural fields dotted with stunning hill towns, curving rural roads, and even crowded summer beaches snaking along 200 kilometers of coastline.

Surprisingly few tourists make their way to Le Marche, despite its numerous art treasures, carefully preserved historic churches, towers, and piazzas, all giving the region the air of being frozen in time. Below is Sant'Ippolito. 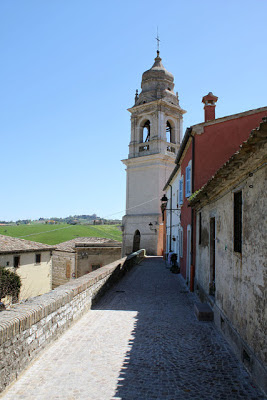 "Something that makes Le Marche so special is that we are really off the beaten path," says Giulia, who runs an organic farm with bed and breakfast Locanda della Valle Nuova, 12 kilometres outside the region's best known city, Urbino.

"People here are not fed up with tourists".

(Here's a photo I recently shot of Giulia, on the right, and Letizia Mattiacci of Alla Madonna del Piatto in Umbria. We met at Letizia's house. As you can see, they were up to something.....) 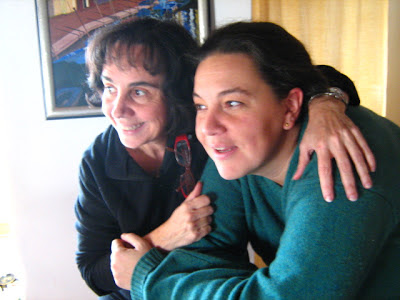 Many Le Marche visitors head to Urbino, where the walled city centre has been declared a UNESCO World Heritage Site.

Birthplace of Renaissance master painter Raphael, Urbino is also known as an early model for the ideal Renaissance town, remade as such by Duke Federico of Montefeltro during the 15th century.

His court was famous in its day and the countryside is today still dominated by his magnificent Ducal Palace - which holds the region's most important art gallery, boasting works painted by Raphael and Piero della Francesca. Below is one of Giulia's photos of a XII century castle perched on a steep hill above the Candigliano river between Acqualagna and Piobbico. 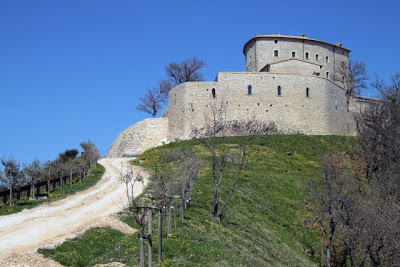 Churches and monasteries hold beautiful art endowed by the wealthy families that were drawn to the duke's court, and Raphael's home is open to art lovers keen to see a fresco painted on the house walls by the artist as a very young man.

For example, visitors can explore the Grotte di Frasassi (Frasassi Caves), among the biggest in Europe, including a chamber which is large enough to hold Milan's great cathedral; or, hike in the beautiful Riserva Naturale Gola del Furlo (Furlo Gorge).

"We have many great sites, but they're all spread around so the region attracts the kind of visitor who wants to really 'live' a place and not just have a list of must-sees from a more fashionable place," adds Giulia. 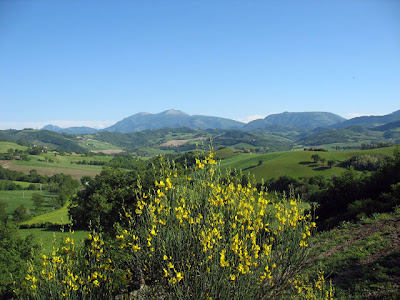 The region is also about wine and food: traditional dishes produced and prepared in the old-fashioned way but rediscovered by modern cooks looking for natural, clean ingredients.

Because Le Marche is fairly unknown, land here was relatively cheap in the 1970s and early 1980s, bringing waves of young producers - including Giulia's family - interested in clean production that would leave as small an environmental footprint as possible.

It's still possible to find heirloom fruits in Le Marche - varieties that have disappeared or been forgotten in other regions. Certain farmers in the Montefeltro area in northern Le Marche specialize in forgotten fruits including visciole, sorbe, mele rosa, and pere angelica.

Hi Sandra, both your photos are beautiful and you also paint a very lovely image of Le Marche. I have not read much about this region of Italy but based on your post I must put it on my future must see list now for Italy. I love the rolling hills and the history is interesting.

Thanks so much for sharing. Hope you had a wonderful New Year in Rome. Have a great first weekend with more to come in 2013.

Hi Kathy, I think it's a bit more difficult to reach by public transport, which keeps it off the beaten tourist path! Still, I plan to get to know the region better.

Hope you had a wonderful Christmas/New Year's and all the best for 2013!

I hope you had a wonderful holiday. It's nice to come catch up on your blog (my blog is sadly neglected - my job is crazy and I simply don't have time to blog or do much of anything these days).

Thanks for introducing me to Le Marche - another place to go on my ever growing list.