Meanwhile, back at the Vatican 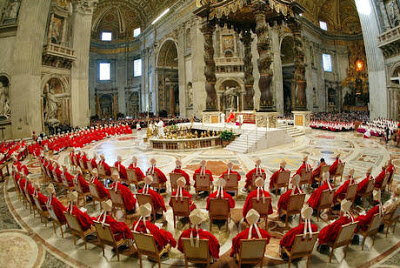 Today, Pope Benedict XVI delivers his final public address from his window overlooking the beautiful St. Peter's Square. I'm watching on television as the piazza begins to fill with crowds that want to be there for an historic moment.

But frankly, the pope and the upcoming conclave is second in my thoughts. My elderly mom has been diagnosed with a very aggressive cancer near her liver, so I'm making plans to go back to Canada to be with her. Also, trying desperately to get back to some healthy state so I'm fit to travel.

Still, it has been part of my job to write about Pope Benedict's doings and what will happen with the conclave.


Benedict shocked the world when he announced on February 11 that he would resign the papacy on February 28.


Suggestions are flying that Benedict may speed up the timing of the conclave, since this is quite an unusual situation where the pope - for the first time in 600 years - was able to give notice that he is retiring from office. Before now, popes died on the job, so cardinals needed 15-20 days to arrive in Rome to begin conclave. 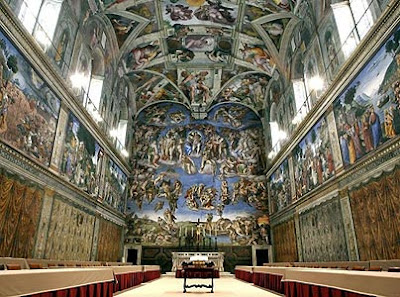 So the Vatican is rushing to make everything ready for the Sistine Chapel when it hosts one of the most important events in the Catholic Church: the election of a new pope.

A team of 40 Vatican workers, officially called the "Floreria" is carefully following the pattern set in April 2005 when cardinals last gathered beneath Michelangelo's masterpiece The Last Judgement on the altar wall of the chapel, and voted to choose Pope Benedict XVI.

Without knowing the precise date of the conclave, the team is racing against the clock to have every detail perfectly prepared for the 116 cardinals who will be shut up inside the fortress-like chapel until a new pope is found.

"Until the date of the conclave, we live from day to day," explains Paul Sagretti, deputy director of the Floreria, whose office is charged with organizing most major events inside the Vatican.

No detail is left to chance as the Floreria workers carefully follow photos taken from previous conclaves, so that everything is arranged inside the Sistine Chapel in precisely the same manner as in previous conclaves. 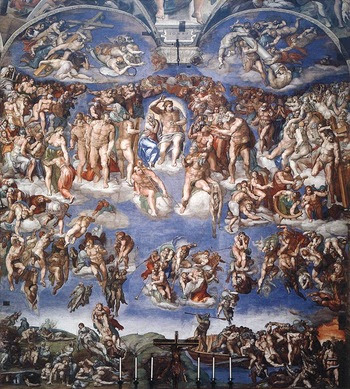 That will include 116 chairs made of cherry wood for the voting cardinals, with seating assigned by place cards bearing the papal coat of arms, and 12 wooden tables covered with beige cloth and burgundy satin.

Six tables are placed on the right side of the chapel and six on the left, arranged in two rows of different levels. A 13th table is placed at front of the chapel, before the altar, where an urn is placed to contain used ballots as well as a Bible.

A wooden platform has been built about 60 centimetres above the Sistine Chapel floor, covered with a beige fabric, so cardinals won't walk on the tiled floor of the chapel but instead are elevated to the level of the second step of the altar.

A velvet bag contains the ballots which each cardinal will draw come voting time.

Finally, two stoves have been connected inside the Sistine Chapel, so after a vote, ballots can be burned with a coloured chemical. The relatively rare white smoke indicates that the conclave of cardinals have reached a decision on who will head the Catholic Church.

Black smoke sends the signal that another vote must be taken.

According to Sagretti, recent conclaves have been much easier for the Floreria to organize than those in the past.

Until the 1970s, the Floreria also had to arrange all of the accommodations for the cardinals arriving from around the world.

Fortunately, with the construction of the residence of Santa Marta to house the cardinals, that task has been lessened.
Posted by sandrac at 05:34

So sorry to hear about your Mum. Our thoughts are with you. Safe journey

Sandra ~ even more important than the new pope (yes, I mean it!) I hope you get well enough to travel and be with your mom.
I pray for you ~ and the new pope!

I am so sorry to read about your mom and that you have been so sick! I hope you are well enough to travel soon so that you can be with her. Sending positive thoughts and prayers to you and your mom.

Oh Sandra, I'm so sorry to hear that your Mum has become ill.
I hope you get well very soon, so that you can go home to her.
It's much nicer to travel when you are not feeling under the weather.
Thinking of you.

Thanks, Anne! Sandi, I appreciate your good wishes and hope I get to see you here in May!

Hi Girasoli, I hope you're well, it's lovely to hear from you! Thanks for your prayers and positive thoughts.

Shelagh, I'm slowly beginning to feel better so hopefully the flights won't be too hellish! Thanks for stopping by!

Sorry to read about your mother, let me know if I can help on this end.

Sorry to hear about your mother. Hope you feel well enough to travel. I'm sure the trip will be difficult enough. On a happier note, I just finished your book and I enjoyed it very much. Best wishes
Dorothy

I'm so sorry to hear about your mom and that you have been so sick. Please take care of yourself, safe travels and my thoughts and prayers are with you, your mom and family.

Thank you, Kathryn, I appreciate your offer.

Thanks, Dorothy, I'm so glad you enjoyed my novel, I appreciate you taking the time to let me know!

Hi Kathy, thanks for your prayers and kind words. I'm beginning to feel better so that will help me to be of more use to my Mom!

Sorry to hear about your mother Sandra. Live just sucks at times ... take care of yourself!

I really wish we could meet up...even though over sad circumstances about your mom's health. Why is Canada so big!? :(

Lisa, next visit I must come to Ottawa, it would be so lovely to see you (and to say hi to my furniture!)

Sandra, I'm so sorry to learn about your mom. Wishing her all the best and you too - hope you are feeling better soon. Safe travels.