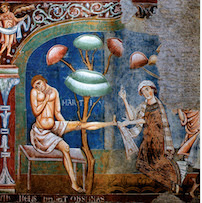 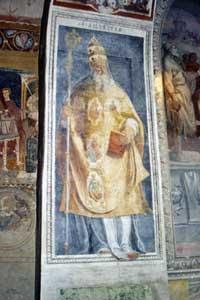 Not far from Rome's Colosseum and the nearby Basilica of San Clemente, famous for its fascinating scavi, is the Basilica of Santi Quattro Coronati or Four Crowned Saints. From the outside, it looks remarkably like the fortress that was once one of its purposes, protecting popes from attack. 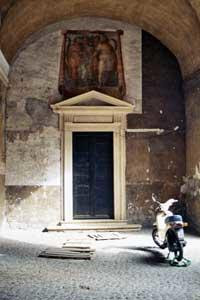 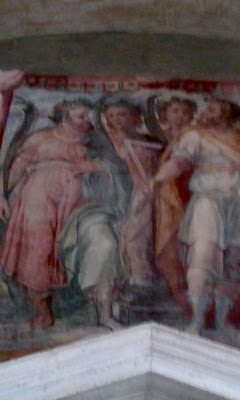 Fresco of the four crowned, or matured, saints.

The treasures inside the Basilica complex are wonderful and recently, thanks to my friend Laura, I was able to get a rare tour of recently opened Gotica Aula, or Gothic Hall.

But first, I'll back up a bit and begin with some history of the basilica itself. Legend tells us that the first church on this site was begun by Pope Miltiades, in the 4th century and built over a Roman villa. Renovations were much later made under Pope Leo IV (847-855) including the belltower and the chapels of Saints Barbara and Nicholas.  He also expanded the church significantly.

Alas, this larger church was burned to the ground during the Norman Sack of Rome (1084) and Pope Paschal II decided to rebuild, but as a much smaller basilica. More changes were made: in the 13th century a Cosmatesque cloister was added (with the tiny Oratorio of St. Barbara). 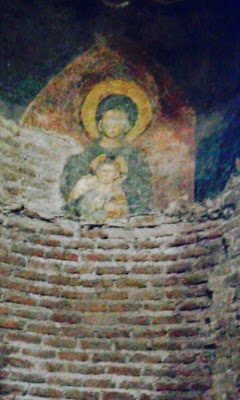 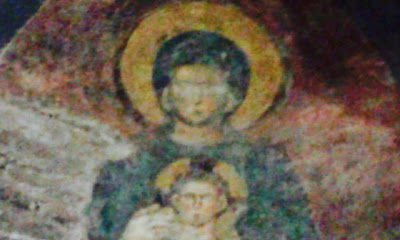 (Frescos in niche inside the Oratorio of St. Barbara)

Then, the Cardinal Palace was enlarged by cardinal Stefano Conti, a nephew of Pope Innocent III. Conti also fortified the palace to become a fortress, to shelter popes during the conflict with the Hohenstaufen emperors. In 1247, the chapel of St Silvester, on the ground floor of the fortress, was consecrated; it contains frescoes depicting the stories of Pope Silvester I and Emperor Constantine I. Wonderful pieces of Church propaganda of the day, they suggest (likely incorrectly) that the sovereignty of the Church (Pope Silvester)  was by mutual consent paramount over the Empire (Constantine).

These are wonderful sites to see but what is relatively new for visitors is the Gothic Hall which is  on the first floor of the Torre Maggiore and was the showpiece of Cardinal Stefano Conti's palace. Here he held banquets, receptions and justice was administered 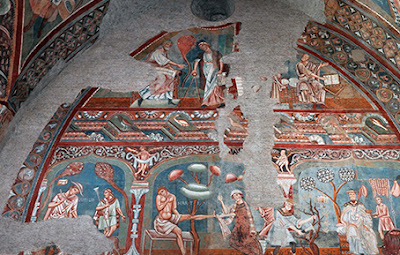 Decorating the great hall are vivid, multicoloured frescoes mixing Byzantine styles with then-recent discoveries of classical antiquity. They seemed to me a sort of stepping stone to the frescos of Giotto - almost, but not quite achieving natural figures.

The story of the re-discovery 20 years ago of the Gothic Hall by Rome Professor Andreina Draghi is fascinating. According to writer Alasdair Palmer, Prof. Draghi thought that the hall above, then completely covered in pale blue plaster, might have been a site where other frescoes had been painted. She theorized that the frescoes in the chapel of St. Silvester did not tell the complete story of what happens after the Church is acknowledged as supreme over the state (that is, the importance of obedience to the Church to salvation) writes Palmer.

It took several years to remove all the plaster without damaging the frescos, which proved to be in extremely good condition, likely because this plaster protected them from 500 years of light, damp - and clumsy restorers.

As is always the case, this is another wonderful post! You offer such excellent perspective and context! THANKS!

Yeah, you're blogging again, even though it took me 2 months to notice (sorry). Very cool that it all survived. I hope all is well in Roma.

does anyone else check in here hoping Sandra will post another blog entry?