The great basilica of Santa Maria Maggiore, which was founded in the fourth century, is one of Rome's most stately churches and one of the four highest-ranking basilicas in the Catholic Church in Rome. It is packed with great art - truly fabulous Byzantine mosaics line the walls and apse - and has such a long history that it is worth many visits.

And I have made many visits - but recently, I had my first official tours that allowed me to climb up on to the loggia that looks down over the piazza of Santa Maria Maggiore (SMM) as well as down below into its museum and scavi, or archaeological excavation site.

Like so many churches in Rome, a city of multiple layers, SMM was originally founded over a temple to the goddess Cybele. It later became a "house" church and in the early 400s the first formal structure was completed under Pope Sixtus III, who held the papacy from 432 to 440.

The early church was dedicated to the Virgin Mary, which was a very popular theme at the time, likely because in 431 she was officially accepted as the "Theotokos" (Mother of God) at the Catholic Church's Council of Ephesus. 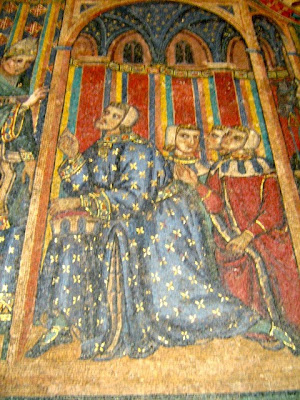 And this, my scholarly friend Laura tells me, likely came as a response to a heretical movement that had been attacking the idea that Mary was in fact the Mother of God.

That's all fine information, but as usual I like a healthy dose of legend with my facts, so I'll turn to the 13th legend that says the church was built in the 300s by Pope Liberius after he had a dream where Mary appeared to him, telling him to build a church in her honour on the Esquiline Hill (near today's Termini railway station). 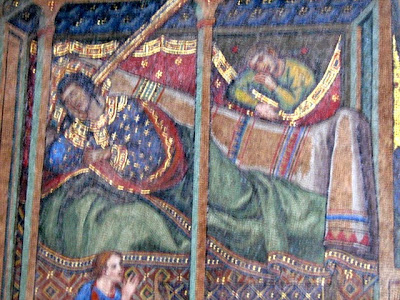 On that very same night, legend holds,  a wealthy Roman had precisely the same dream.

That amazing coincidence was sealed with a rare snowfall on August 5 (during the hottest period in Rome's summer) which fell in an outline of the floor plan for this new church. Because of that miracle, SMM is sometimes referred to as Our Lady of the Snows and a huge Mass is held each year on August 5 to mark the event, with white rose petals sprinkled to commemorate the snowfall. 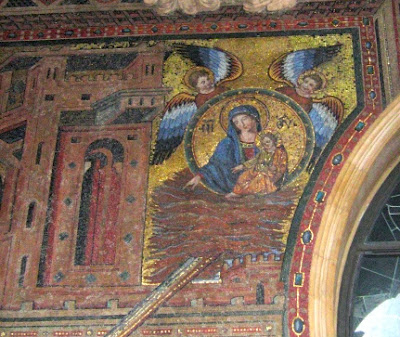 All of this legend is celebrated in the loggia with mosaics that are beautifully lit in the evening so they can be seen from the piazza below – but at such a distance, it is harder to make out the details of the legend. Up close, the detail is lovely.

The loggia also contains several beautiful statues from the school of Bernini, which were carved for the high altar of the basilica. However, the bronze and marble creations were found to be too heavy for the foundations at that spot in the basilica and were moved upstairs to the loggia! 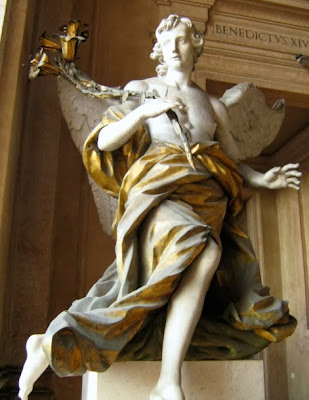 The tour guide assured me that the loggia over the main entrance to the basilica has a more sturdy foundation to support the weight of these statues....but I don't think I'll linger in the entryway below the next time I visit SMM.

On an unrelated note: I have been a very lazy blogger of late. I began a full-time (but not permanent) six-month contract with Italy's largest news agency one month ago, which is helpful as I am coming up on my two-year anniversary of living in Rome and desperately needed the work in order to live here longer.

However, the new gig (plus the intensive Italian language training I need) has meant less time and energy for other types of writing such as blogging. Still, I am beginning to find my footing at ANSA, so I hope I can get back into a blogging routine again!

How strange to move the "too heavy" statue upstairs. I'm making a note to self not to linger in the entryway either! SMM is gorgeous, although I've only visited it once (so far!)

So glad you've landed this contract so you can stay longer in Rome. You're getting settled into this new life beautifully!

I wasn't able to visit this church when I was in Rome - it's definitely high on my list for next time. I love the legend about the snow fall. And the mosaics look fantastic!

Wonderful post. I don't think I've had the pleasure of visiting SMM. White rose petals is a lovely visual.

One of the hotel's we use in Rome is just near here. It is an amazing church ~ now I will sound very smart when I talk about it!

Thanks so much, Anne! It is odd to think of moving heavy statues to a place above people's heads!

Hi Annie, these mosaics are gorgeous - yet nothing can hold a candle to San Marco in Venice. Time I returned there for a visit.

Thanks very much, Kathy. Hard to believe it has been two years - I hope I am still here when you next return!

Sandi, I remember your hotel from last summer with your group of friends - it was right in the back yard of this church.

Ciao. It is nice to read about your new work opportunity. We just walked by SMM when we were there. Next time we'll check out the interior. I have known the name "Our Lady of the Snows" all my life, because I was baptized in the one in Queens in NYC. But I didn't know the story behind the name. Take care.