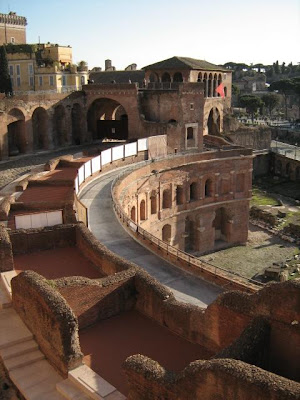 Okay, the Mercati di Traiano have been closed for many, many centuries so there were really no Boxing Day sales to be had. Forgive the lame joke; perhaps I got too much sun today clambering among the ruins! 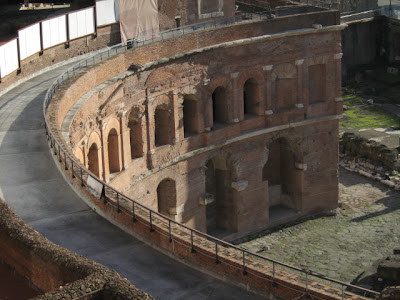 But it was interesting to have a good look around these markets, which are located conveniently close to my house. A relatively new museum, the Museo die Fori Imperiali, was opened a few years ago over part of the ancient markets, to display artifacts found during various excavations. 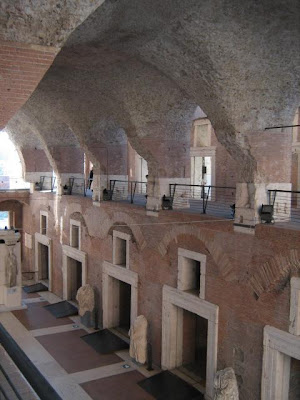 Trajan's markets were built in AD 100-110 for the Emperor Trajan, as part of an entire Trajan's Forum; which was, in turn, part of the system of Imperial Forums. Those included the fori of Caesar, Augustus, Nerva, and the Templum Pacis. 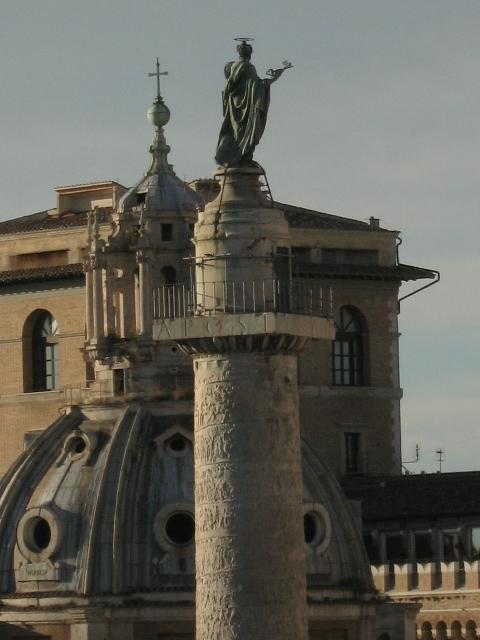 And, of course, there's the magnificent Trajan's Column, which tells the stories of the Emperor's exploits and great victory in the Dacian Wars, in a spiraling series of figures. Better than a comic book or graphic novel!
Posted by sandrac at 12:49

Sandra,
I did a minor in ancient Greek and Roman history when I did my BA at McGill - I`m getting seriously envious of your adventure in Rome!
Keep the blogging up!
Gilbert

Hi Gilbert, I'm seriously envious of your studies! I've been slowly teaching myself about Roman history, through some good podcasts, reading, and exploring. It's really fascinating stuff, and the parallels with today's world painfully close!

Hope you had a great Christmas, and all the best in 2012!

"clambering among the ruins" sounds like a pretty cool boxing day

Ciao Kathryn, it certainly was! Hope you're having a good Christmas holiday season.

The weather looks beautiful. What a brilliant way to spend a day.

Your Christmas adventures in Rome have inspired me . . . if Paolo's Zellers is closed by next Christmas and if we cn find soemone to take care of the cats we just may spend Christmas in Rome - something I have always wanted to do.

Jerry, I am certain that you and Paolo would really enjoy Christmas in Rome. It's festive without being annoying; there's plenty of good food and wine, and the weather is delightful!

I hope Paolo isn't too worried about his store; having it close would not be easy but I'm guessing he already has a Plan B!

Hi Sandra, it is really wonderful reading about your explorations. I love learning about Rome's History through your posts.

Looking forward to more explorations. Thanks so much for posting.

Thanks, Kathy. I had better do a few more serious posts soon on Rome's history; enough cheekiness!