A stroll around the edges of the Forums 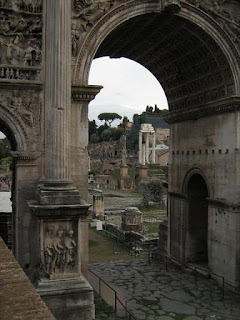 After school the other day, I did a few chores and then took a stroll from my apartment near the Colosseum, around the edges of the Forum. I didn't feel like paying to actually enter the Forum; it was getting late and in the afternoon and the sun was setting.

Instead, I spent some time looking more closely at the brilliant white marble Arch of  Septimius Severus (which, in Italian, is the Arco di Settimo Severo.) This triumphal arch was dedicated in 203AD to commemorate the victories of the emperor Septimius Severus and his two sons. And so, the wars in Parthia and the celebrations afterwards are the main themes of the arch. 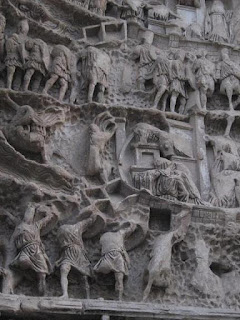 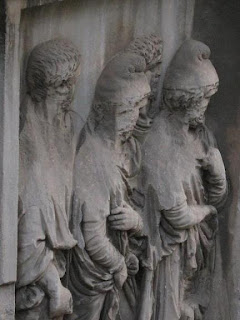 The arch is at the northern end of the Forums and very near the Capital Hill, which celebrates the founding of the city of Rome. According to legend, the city was founded by twins Remus and Romulus, who were kept alive by a She-wolf. This image is very popular in Rome. 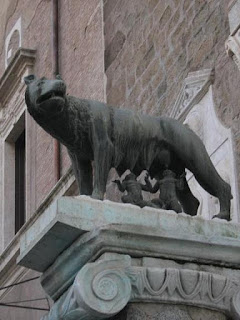 Hi Sandra, sounds like a wonderful evening stroll. Your close up photos are wonderful and I really enjoyed learning about the history of this amazing Arch. Incredible detail.

Thanks so much for sharing. Have a great evening.

Thanks for the history and your photos in detail. On one hand, it's remarkable that the arch and reliefs have withstood time. On the other hand, it's sad to see the decay. Love Roman mythology!

Thanks, Kathy and menehune. The light has been really great these days; mostly sunny and bright, which makes for better photos! Here's hoping the weather in Rome stays this wonderful.

Love these photos. I always like seeing the twins with the wolf - might be a fun thing to collect in Rome along with Annunciations!

Annie, that's a great suggestion! I do love the myth/legend of the she-wolf and the twins, and if I pay closer attention, I may see more of them!

BTW, Kathy and were commenting last week on all of the street shrines in the area of Rome where she was staying (in my area, too!) If you ever tire of Venice, this might be fresh new ground to consider.

Come join us every Saturday... you will have loads of photos to make us green with envy. It will give me idea's for next May.
Here is the new Saturday PhotoHunt site.
I hope you will join in the fun!
Sandi

What a great way to spent a late afternoon! Perhaps you should set up a when in Rome tour business - your market would be the cultured traveler who is interested in history, art, and architecture. Yes it is undoubtably illegal but when in Rome . . .