Christmas Countdown at the Vatican 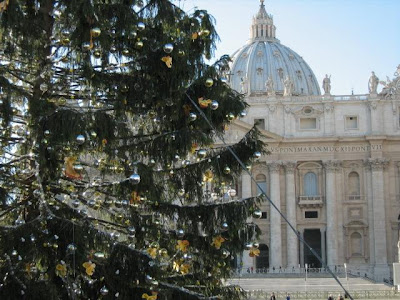 I popped over to the Vatican on Friday, the day before the night before Christmas, to pick up my ticket for Christmas Eve Mass with the Pope. 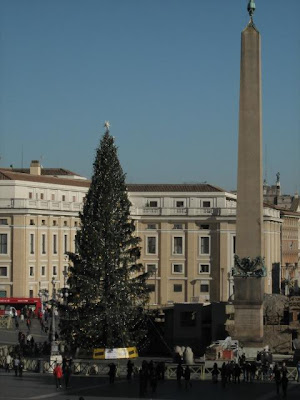 Everything was bustling outside St. Peter's. Workers were erecting a very large nativity scene beside the enormous Christmas tree in the centre of Piazza San Pietro. However, it was top secret, it seems; screens blocked almost all of the work from prying eyes, thought I caught a glimpse.... 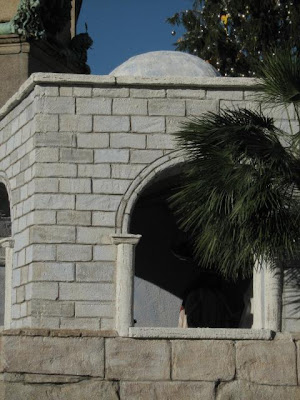 Folks waiting in line to pass security to enter St. Peter's were shedding their coats as December 23 was very sunny and warm -- at least 15 degrees C and likely more in the marble-enclosed piazza. Beautiful!
Inside the massive basilica, large areas were roped-off and chairs set out for the massive crowd due to arrive as early as 6 p.m. for the 10 p.m. Mass. 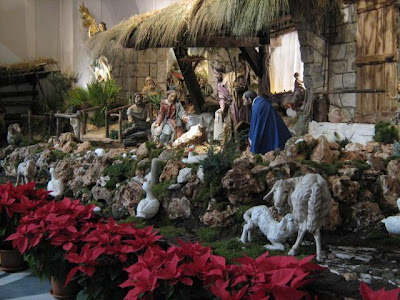 I plan to arrive at least 3 hours early to be sure I get a chair. Helpfully, the Vatican staff warns that having a ticket to Christmas Eve Mass in St. Peter's is no guarantee that one will actually get inside! Such crowds are expected that many ticket holders will still have to stand outside in the piazza, watching Mass on giant screens.
I suspect that would NOT be comfortable. On the other hand, I may end up peeing my pants before this is over -- not from the excitement of Mass in St. Peter's with the Pope, but simply because of the very long wait. (I'll be there alone so I won't risk losing my seat by leaving it!)
A lively manger scene is also in place in a side chapel of St. Peter's, featuring a lot of animals that one would expect to see around a manger. 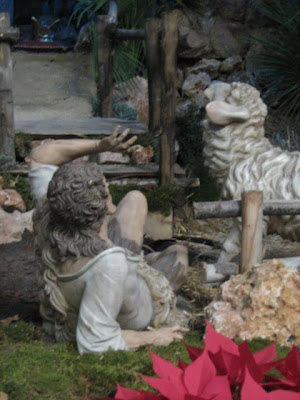 I had to smile at this poor shepherd, blown away by the glory of the angel bringing the Good News! The sheep looks rather surprised as well. 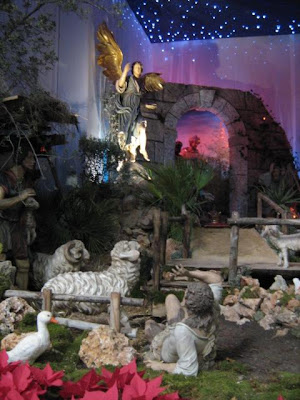 And, of course, the tiny cradle for Baby Jesus lies empty, waiting for tonight. 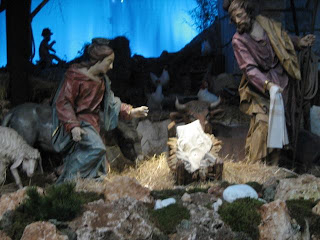 Merry Christmas, Buon Natale, happy holidays to all!
Posted by sandrac at 03:12

Hi Sandra, how exciting this experience will be for you. Love seeing the photos you took. I hope you score a seat.

Have a wonderful time and wishing you a very Merry Christmas.

Thanks, Kathy; I'm heading there now and I'll let you know how it goes.

In the meantime, I hope you have a wonderful Christmas!

Wishing you a Very Merry Christmas Sandra!
How wonderful to be in the big square on Christmas Eve.
I hope you keep warm, and make some new friends there!!

Hi Shelagh, Buon Natale to you, too. It did get a bit chilly last night, standing in line for 2.5 hours to get into St. Peter's for Mass. And, of course, it rained a bit while we were waiting. But it was still a wonderful event. Hope you're having a great Christmas!

We were able to reserve tickets to the Christmas Eve mass. How early do you suggest we line up in order to get inside the church?

Congratulations, Darna, on getting tickets to the Christmas Eve Mass, it's a great experience.

So if you can, I would aim to get to the square about 6 p.m. Take an umbrella and mitts, since it gets cool standing in line (and if it's windy, mist from the fountains in the square can blow around!) It's easier to take off layers if you're too warm than it is to warm up.

It makes for a long wait, but it is pretty interesting - the gigantic creche is the square is being finalized; there are people from all over the world waiting and chatting. A few people cruising up and down the line, hoping to score a last minute ticket.

I might go back, so maybe I'll see you there!