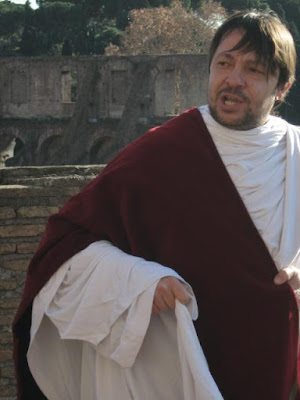 Gathering his toga tight against the December chill of the Colosseum's uppermost tier, the great Roman orator Cicero cautions gawking visitors -- including me -- to not judge his peers harshly for the bloody spectacles they once enjoyed in this ancient site.
“Come, come see the arena,” he says, with a sweeping gesture towards the great arena. “This is Rome!”
Okay, so it wasn't really Marcus Tullius Cicero, who was last seen in the Colosseum more than 2,000 years ago. But the actor who plays Cicero did a pretty good job of surprising a group of us on a special “Archaeology at Christmas” tour.
I tagged along for a news feature I wrote earlier this week about the program, which pairs actors and archeologists at four of Rome's museums -- collectively, the Museo Nazionale Romano -- plus the Colosseum to give visitors some different insights into Rome's history. 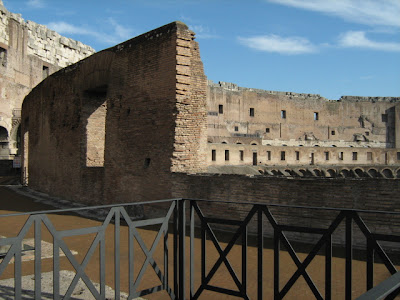 The Colosseum tour includes a rare visit to the uppermost tier, which was very interesting to see with some great views (though a tough climb up.) For an interview about the program, I met an archaeologist at the Palazzo Massimo alle Terme, which I'm sorry to admit I had never visited before (even though it sits right outside the Rome's main Termini train station. Impossible to miss!) 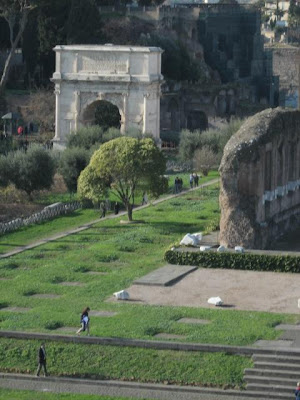 The Archaeology at Christmas program includes a special tour around the Palazzo Massimo that ends among the frescoes from the dining room in the suburban villa of Livia Drusilla, wife of Augustus. Actors there perform short excerpts from Shakespeare's Italian plays. 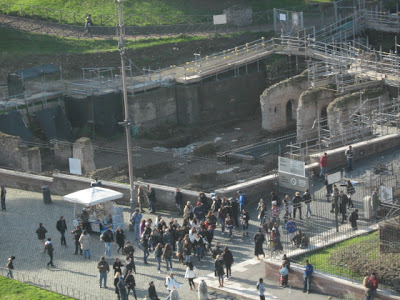 The life of a second-century female fishmonger is translated by an archaeologist from ancient inscriptions displayed in the Museo Epigrafico alle Terme di Diocleziano. There are also events at the Crypta Balbi, on Via delle Botteghe Oscure near Rome's Largo di Torre and at the Palazzo Altemps.
There really is something new to learn and see every day in Roma! 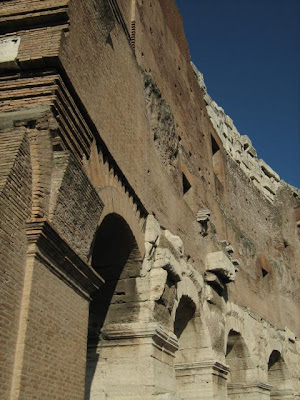 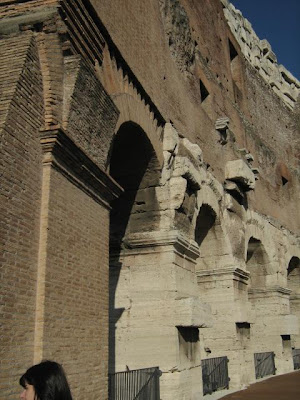 Feel very fortunate to be brought along for this ride with you - it's inspirational, educational and a real literary treat for me. Hope you are able to spend joyful and wonderfully inspiring holidays! m

Hi Sandra, that tour sounds wonderful. How fun to have actors play out some scenes. I love his quote "This is Rome." Your news feature sounds very interesting. Ah, to be in Rome with something new all around to savour.

I wanted to wish you a very Happy Holidays. I'm very anxious to hear about what plans you went with for Christmas Eve. But whatever you decide upon I know it will be very special and memorable.

How very fortunate you are to experience all these adventures!Thank you for sharing them with us.

I hope you have a wonderful holiday season and a most exciting 2012!

Thanks, menehune; I believe it will be a very special Christmas. And I hope that you, too, have a joyful holiday season.

Kathy, thanks so much. I hope that you also have a wonderful Christmas holiday! I will be going to the Vatican to hang with the Pope Christmas Eve, so I'll be sure to report back on that. (Especially if I accidentally pee my pants; not from excitement, but because I'll have to sit for about 3 hours BEFORE Mass to be sure to get a spot in St. Peters. Yikes!)

This is so interesting; love your photos too. A female fishmonger? Who knew?!

I can't wait to hear about your Christmas Eve at the Vatican. Happy holidays to you!

Hi Annie, thanks! It was apparently very rare for a woman to be honoured with an inscription about her life, after her death. (Women ranked about as highly as slaves at the time, of course.) So I thought that was pretty interesting!

Great pictures and story but please tell me you really don't think Cicero was hanging out in the Colosseum. He was dead long before it was built.

Hi Anonymous, never fear! In the 3rd paragraph of this post, I remind readers that: "....it wasn't really Marcus Tullius Cicero, who was last seen in the Colosseum more than 2,000 years ago. But the actor who plays Cicero did a pretty good job..."

Thanks for stopping by.

Hi Sandra, I understood what you meant about the actor. What I was referring to was the line "Okay, so it wasn't really Marcus Tullius Cicero, who was last seen in the Colosseum more than 2,000 years ago." I just wanted people to not get the impression that Cicero was around after the Colosseum was built in 80AD. Anyway, I love your blog and hope that I will be able to visit Italy soon.

Hi Anon, I hope you get to visit Italy (and Rome) soon! It is truly fascinating.