The Pope and me: Christmas Eve at the Vatican 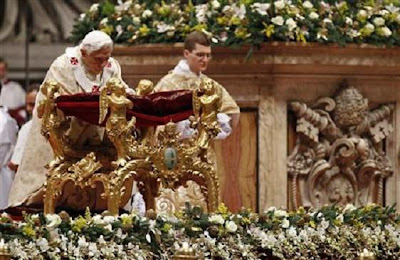 It was quite a show: St. Peter's, perhaps the largest church in Christendom, packed right up to the mosaics with devoted laypeople, awestruck priests and pretty young nuns, dignitaries, a few babies, and me. A cafeteria Catholic, by my brother's description (because I pick and chose what aspects of the Catholic faith I can accept, and what I must reject.)
We were all there to join the Pope in celebrating Christmas Eve Mass, in the splendor of St. Peter's Basilica (photo above from Reuters.)
I just thanked the Lord, in all sincerity, to finally have a seat in which to place my tired old self. Almost three hours queuing in the Piazza San Pietro was more exhausting than I had expected. The line was enormous, snaking twice around the vast piazza as those of us who had been fortunate enough to get a ticket waited to actually get inside. 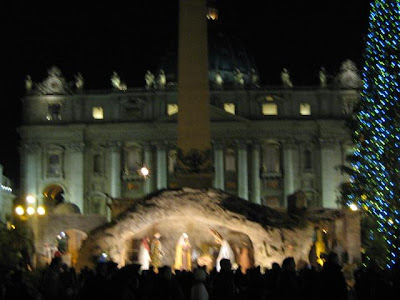 First, the wind came up. Then, the rain began -- not heavily, just enough to give us all a chill. My feet began to really hurt.
Fascinated, I watched as two young priests -- one Irish, one French -- moved up and down the line, trying to find a couple of spare tickets so they could get inside for the Papal Mass. A woman from Austria asked me where she could find the Vatican.
And when officials finally opened the doors of St. Peter's Basilica, it was like some midnight madness sale at an electronics warehouse. People actually sprinted through the security area and raced up the enormous steps to get inside and grab a seat. Many were still left standing at the back throughout the two-hour long Mass and many, many more were left outside. 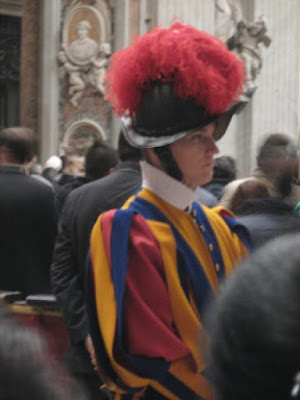 The music was divine, the setting so very beautiful. The Pope, who entered to applause, was wheeled up to the main altar of St. Peter's while standing on the motorized platform that he now uses. According to media reports, the Vatican explains the platform helps the Pope to conserve his strength, allows more people to see him, and protects him from attacks such as one two years ago when a woman jumped at the Pope on his way in to Christmas Eve Mass, knocking him to the floor.
The Pope delivered his homily in Italian, lamenting the commercialization of Christmas. Rather than reducing the occasion to a shopping experience, people around the world should rediscover the true meaning of Christmas in the humble birth of the Christ child. 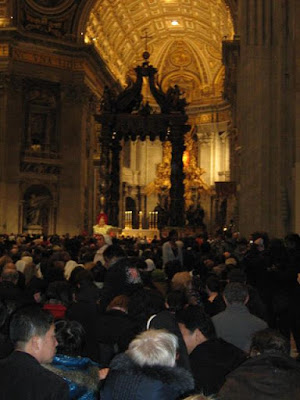 According to media reports, Christmas Eve Mass with the Pope was moved up to 10 p.m. from midnight several years ago to spare him a very late night that is followed by an important Christmas Day speech.
I had a long walk home after Mass, about an hour through the still-bustling streets of Rome. It felt so good to be there, and to still be here today, and to know that I'll be here tomorrow.
Posted by sandrac at 12:46

Merry Christmas, Sandra! Although your day is almost over, I hope this FIRST Christmas in Rome ;) was extra special.

Thanks for the eyewitness report of "midnight" Mass.

Thanks, Colleen! I hope you're also having a wonderful Christmas!

Ah Sandra, how amazing to spend Christmas Eve surrounded by a faith family of thousands. I love the end of your post...good indeed to have put down roots in Rome. Wishing you much joy and wonder this Christmastide and may the coming year be filled with blessings!

Merry Christmas! That is so cool that you got in. Loved reading your report on the mass. Lucky you to be in Rome yesterday, today, and tomorrow! Enjoy!!

I'm glad to read it all worked out, seems like you got the full experience. Tutto il meglio per te nel 2012!

It will certainly be a Christmas to remember. Glad you were able to make it in. The photos and your descriptions seem to pull this to life.

I think I like the idea of being a grocery store catholic... do they take southern methodists too?

What a wonderful experience. I am tearful at the thought of it!

What an incredible experience that must have been despite the wait and weather. To actually be in the church of the seat of the Catholic faith on Christmas Eve hearing the Pope himself deliver the Mass. And I'm not even Catholic!

Wonderful post and photos Sandra! I am so glad you decided to go and I am in awe of your stamina!

Thanks so much, everyone!

Kathryn, i migliori auguri per il 2012 anchi a te!

Susie, welcome back to Italy, how is Venice?!

So glad you toughed it out and made it inside with a seat. What an amazing experience. Thanks for the photos!

Hi Sandra, Venice has been much like Rome. Glorious sunny days. We have been so fortunate!

Definitely a key lifetime experience even for a cafeteria catholic. ;) You are bringing Rome alive for us.

Thanks so much, Marta! Someone once said that writing about our experiences allows us to relive them again. For me, it's true!

Susie, I'm glad you're enjoying Venice. I hope I can get up there in January (or maybe in time for a taste of Carneval!)

Palma, I hope you had a wonderful Christmas.

A cafeteria Catholic - I love that! I saw a brief glimpse of this on TV here in the USA and thought about you. Thanks for this report!

Hi Sandra, I'm so glad that you were able to get inside too. I enjoyed reading about your very special Christmas Eve experience. Thanks so much for writing about it and for sharing your photos.

Hope the rest of your Christmas Holidays in Rome was just as special.

I love reading your posts and I really liked your last line in this one....how special to have that sense of being there really. Not just waiting to get on the plane home. Is reality settling in finally?