Chillin' on the Celian 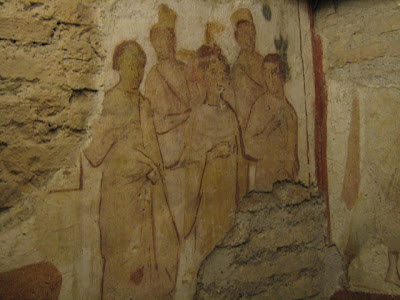 On Sunday, I explored a fascinating bit of underground  Rome; a site that to me at least, is off the beaten path even though it's a mere stone's throw from the Colosseum.

The Case Romane del Celio -- The Roman Houses of the Celio. This is actually a complex on several levels encompassing at least three layers of Roman history dating back to the earliest years of Christianity.

The Celio is one of Rome's seven famous hills, but one of the lesser known, even though it is nestled right in beside the Palatine and gazes upon the Colosseum. I must confess, I hadn't paid much attention myself to the Celio until a reader, Heidi, asked me about it. 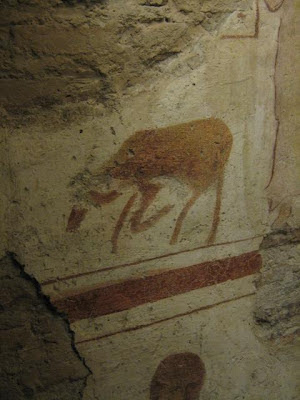 When I visited Sunday, I was very surprised by the extent of the complex that basically burrows into the hill, beneath the massive church of SS. Giovanni e Paolo (Saints John and Paul.) In fact, the church itself was once a pagan building, converted at a time when Christianity was still finding its footing in Rome. 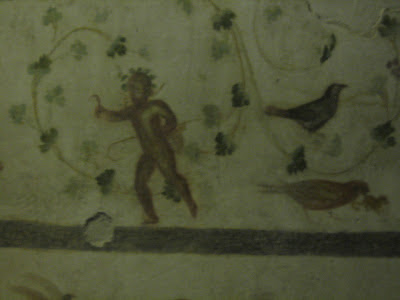 According to legend, the story of the building begins in the 2nd century AD when two homes were built on the Celian hill, near a temple dedicated to the emperor Claudius. In the third century, a third home was built by a man who then purchased the earlier two and combined them into a single building. 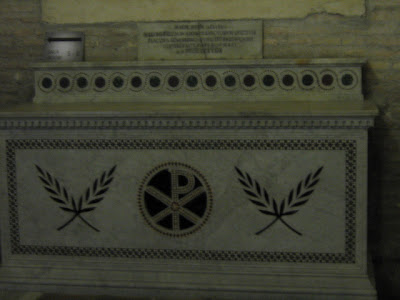 Christian decorations dating from this period, as well as a hidden cemetery, have been found on the site. Legend has it that two Roman military officers, John and Paul, were executed for their Christian beliefs and their bodies were buried here. However, it seems that story has been debunked.

Still, the house was venerated by early Christians, to the degree that in the 5th century, a large church was built over the burial area of the house and dedicated to saints John and Paul. 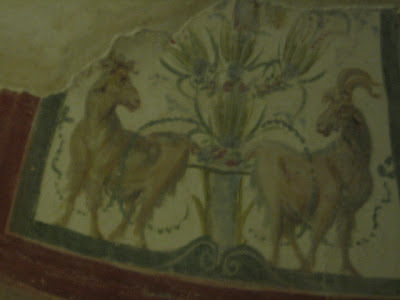 Apparently over the centuries, the earlier homes were built upon; shops set up above; all kinds of uses were made but in that most Roman of traditions, the new was always built on top of the old so nothing was really destroyed, just reconfigured.

Which is fortunate for us. The site, which is not well advertised or promoted in Rome, is a fascinating warren of rooms, large and small, some with lovely fresco fragments, others with marble altars decorated with small mosaics. 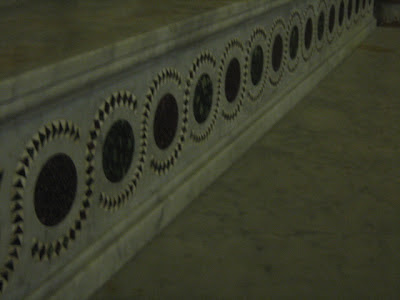 The entrance to the Roman Houses complex is on the very picturesque Clivo di Scauro, which translates as the Scairis Climb. There are numerous ruins alongside this street, which dates to the 2nd century BC and was named for the magistrate who built it. Above this ancient street are numerous arches which are actually mediaeval buttresses supporting the church of SS. Giovanni e Paolo. 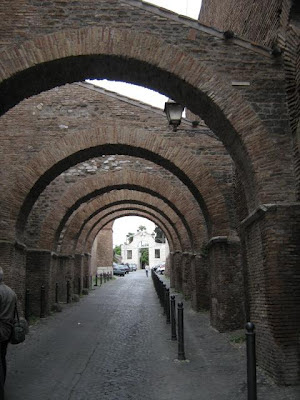 I think that it's well worth finding this off-the-beaten path spot! 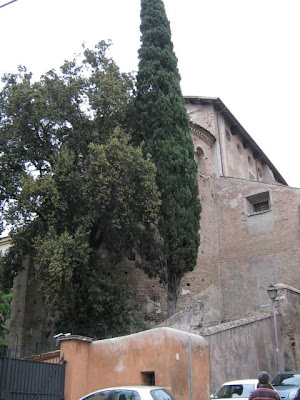 Beautiful photos. We missed this on our trip even though we were staying just a few blocks away and walked by it once or twice. We went to a similar underground church - Basilica of San Clemente which was pretty fascinating also. Another item on the list if I ever get back to Rome.

Hi Marta, it's nice to hear from you. I'm also a fan of San Clemente; it's really fascinating to descend all the way to the Mithraic temple. (And I confess I recently read a Ngaio Marsh murder mystery that was set in San Clemente. Very old-fashioned but still fun.)

What a fascinating place. There's something very poignant about the artwork and fresco fragments. Thanks for sharing!

Hi Annie, it is poignant, all those lives that have passed through here. Thanks for stopping by!

Hi Sandra, what a wonderful off the beaten path find. I enjoyed reading about the history and seeing your photos of some of the fresco fragments and mosaics. The arches outside is pretty cool too.

Thanks so much for sharing such a wonderful find. Have a great week.

Hi Sandra. I've been following your blog since the beginning and am really enjoying your posts. I visited this site when I was in Rome in April 2011 and also loved it. For the week I was in Rome, I made it a point to go underground at least once a day and had this site on my must-see list. Best regards, margaretlb

Hello Sandrac, i discovered your blog via the "Blog of Leonardo da Vinci". I have been surfing similar sites online since i am going to Rome in June for an italian language course!I loved your posts thank you!:)

Hi Kathy, it is an interesting find for me (I'm sure it's very well known to experts but I'm always excited by my "discoveries." Hope you're having a great weekend.

Thanks Margaret for your kind words. I'm going to be better prepared when I return to the Roman Houses, I kind of stumbled in this time without a lot of information. Next time, I'll know better.

Hi Demi, have you settled on a language school? I really can recommend the LdV altho it's the only school in Rome that I've attended so I can't really make comparisons here. But I thought the quality of the teaching was very high and compared well with language schools I've attended in Canada. Let me know if you have more questions.

Well done! I'm excited to add this to my now growing 'must see' list when I'm in Roma ~ arriving tomorrow from Tyrol!!!

Reading your blog has inspired me to explore beyond my normal comfort zones in centro storico. Mille grazie!!!