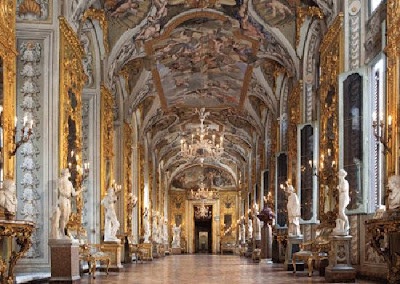 Has everyone visited the Palazzo Doria Pamphilj? It's right smack in the middle of Rome, just off the frantic Piazza Venezia, yet I imagine people walk past it all the time without realizing what a gem is in their midst.

There are a lot of things to love about this palazzo, where the family still lives (at least some of the family, some of the time.) There is, of course, some great art: a couple of Caravaggios, Titians, and other Big Names in Italian art.

Yet the palazzo is small enough that it doesn't feel overwhelming. I spent a couple of hours here today and left still able to stand up straight. I did not feel swamped by an overload of great art. Plus, there are chairs all over the place, so it's possible to sit and absorb the surroundings, from time to time. Plus, I have never seen it terribly crowded.

Plus, I love the free audio guide which is mostly narrated by one of the last remaining descendants of the Doria Pamphilj clan.

Plus, the exhibition is as much about the palazzo -- and its history, its various small apartments and wings, and its beautiful courtyard -- as it is about the art. 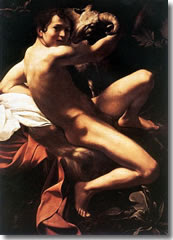 But there is lots of art to enjoy, never fear. In addition to Caravaggio (that's his St. John the Baptist just above) and Tintoretto, there are works by Correggio, Annibale and Lodovico Carracci, Bellini, Parmigianino and Flemish masters including Jan and Pieter Bruegel the elders, Rubens, and Hans Memling.

Also here are Titian's Salome with the Head of St. John the Baptist, and Bernini's Bust of Innocent X, whose sister-in-law started this entire art collection, which is still privately held by the family.

Speaking of the family, according to Wikipedia,  the collection was first opened to the public by Orietta Pogson Doria Pamphilj, whose English husband Frank Pogson added her name to his. Princess Orietta and Don Frank did much to restore the collection and the palazzo.  Following her death in 2000, guardianship of the collection was taken over by her adopted, English-born, children, Prince Jonathan Doria Pamphilj (who formed a Civil Partnership with Elson Edeno Braga and has two children, Emily and Filippo Andrea VII); and Donna Gesine Pogson Doria Pamphilj (married to Massimiliano Floridi, with four daughters, Anna, Elisa, Orietta and Irene).

(Photo of  Jonathan and Gesine below from The Telegraph newspaper in London.) 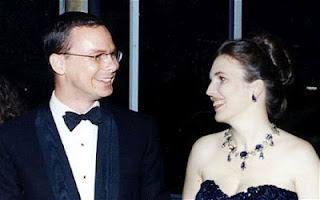 They all still have apartments in the palazzo, although the British press has been filled with stories about a bitter court battle between Jonathan and his sister over whether his children, born to surrogate mothers, should be allowed to inherit the family fortune. Jonathan argues his children should have the same legal standing as her children.

Must add this to my list of new places for next Rome visit. I feel a need to be there. Thanks for sharing so much, Mia Amica.

Clearly this place has a lot of plusses going for it! I hadn't known much about this gallery before, so thanks for this informative entry. Hopefully I will have a chance to view it myself someday!

I checked the location on google maps and street view, quite the treasure behind those big doors. I'm sure we must have been close since it is on a direct line (in the Roma way of direct) between the Vatican and were we stayed. Another reason to return (like I needed one). I think the all the kids should be included.

Hi Sandra, what a wonderful treasure of a place to visit. I like that it has so many beautiful art (and history) with not the massive crowds. That hallway in your first photo is really amazing. Great capture.

Thanks so much for sharing such a great find for us. Have a wonderful week.

Jane, it's my pleasure! Thanks for commenting.

Anne, I hope you do get to see it for yourself one day, it really is a great spot.

Kathryn, you probably have walked past it and been too distracted by all the traffic on Corso (both on the sidewalks and the motor traffic) to notice. I don't much like the Corso, 'cuz it's so chaotic.

I also don't understand the sister's argument, really. Sure, Jonathan's children are from surrogate mothers, but both Jonathan and his sister were themselves adopted!

Hi Kathy, it is a bit of a hidden treasure. Hope you have a great weekend!

Sandra, my husband and I spent a rainy afternoon here in late January. It was only a short walk from our hotel, and there were very few other people there. It felt like we were taking a private tour! Very enjoyable.

Hello Mary, I'm glad you enjoyed it, too! It has a cozy feel to it, for all that it's such an important palazzo. Maybe it's the audio guide, or the fact that I have never felt crowded or rushed there....

I have walked by that Palazzo many times and never ventured in. What a mistake! I will correct this when I'm in town for three weeks in December.