A walk through history in Rome's Ghetto 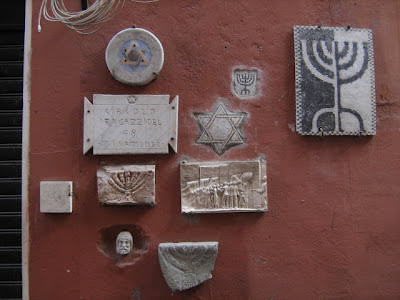 This afternoon, I was walking through the Ghetto -- one of Rome's most historic and fascinating neighbourhoods -- when the plaques on this wall and others on the ground reminded me that it wasn't so long ago that this Jewish neighborhood was devastated by the Holocaust. 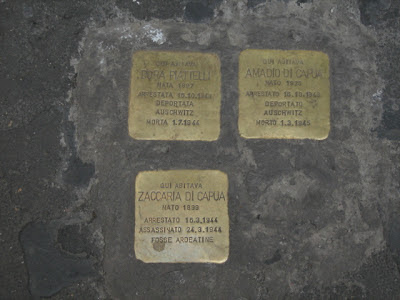 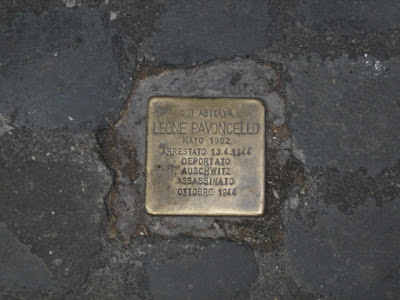 They're a bit hard to read, thanks to my less than great skills as a photog. But this one says:


"Qui abitava
Leone Pavoncello
Nato 1902
Arrestato 13.4.1944
Deportato
Auschwitz;
Assassinato
Ottobre 1944"
Several of these brass markers lie along this street, commemorating some of the 2,100 Jewish victims of the Holocaust -- and of the Second World War more generally. I say that, because I noticed one plaque was dedicated to a Jewish man who was among the 330 Romans randomly rounded up by the Nazi forces and assassinated at the Fosse Ardeatine outside Rome on March 24, 1944. The round-up occured in retaliation for an attack on German soldiers by Italian partisans.
Rome is brimming with history from so many ages. 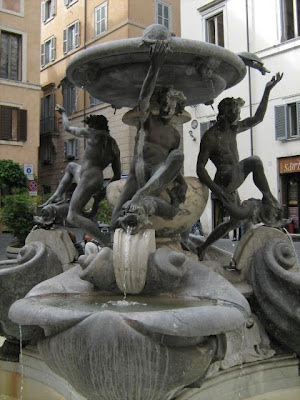 At the end of Via della Reginella, the pain of the past is tempered a bit where the street opens up into the Piazza Mattei, with its delightful Fontana delle Tartarughe (Tortoise Fountain.) This Baroque fountain was created by Giacomo della Porta with the tortoises added later by the great sculptor Bernini. 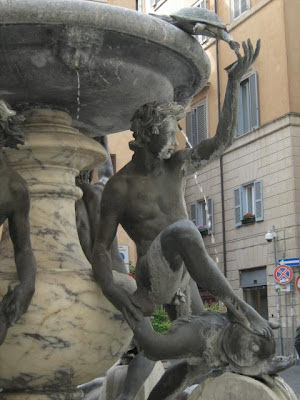 Thanks again for the walk and the moment in history we would like to forget but must remember.

I always enjoy your walks.

Thanks, Jane, it's not an upbeat topic but as you say, most definitely one that cannot ever be forgotten.

Hi Kathryn, maybe someday you and your husband will be back in Rome and we can take a walk together!

This is one of the area's I look forward to wandering.
Those brass plates are awesome~

Hi Sandi, it's such an interesting area, I know you'll enjoy it!

Hi Sandra, I also enjoy when you go on your walks because we get to enjoy Rome along with you. It's much better if we were right there along with you, but following on your blog posts is the next thing. So much history is right. The plaques are a nice tribute to the memories of those they honor.

That's such a cool fountain too.

I'm here in Vegas where they try to imitate Rome with Ceasar's Palace and Venice, but sadly is it not the same as the real Rome or Venice. :)

Thanks so much for sharing your walks and discoveries with us. Have a wonderful week.

Hi Kathy, how is Las Vegas? I've never been and have always wanted to see it (even just for a day or two)

But I can imagine it would just make you more anxious to see the real Rome and Venice again....better come back to visit soon!

I just came upon your beautiful blogsite and was hoping you could inform me of just what that plaque reads(in English translation of course) on the building at 53 via del portico d'ottavia in the old Jewish quarter of Rome. I hope this is still a viable blog and if so many thanks for your consideration.