A day in Arezzo (where life is beautiful, but boiling) 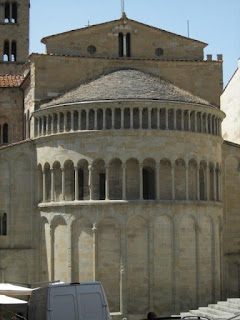 I barely remember Roberto Benigni's 1997 film "Life is Beautiful" which was shot in the Tuscan city of Arezzo. But a day trip there on Friday made me think that life can be boiling as well as beautiful.

The heat was staggering -- over 40C -- so I spent much of the day dodging from church to church. Which I would have done anyway, of course! Arezzo has some rare beauty in its churches, such as the Romanesque Santa Maria della Pieve just above.

The church, dating from the 12th century, sits at the foot of the steeply sloping Piazza Grande, which is topped by the long, shady Vasari loggia. To one side of the piazza is the Palazzo della Fraternita dei Laici, with its lovely clock tower. 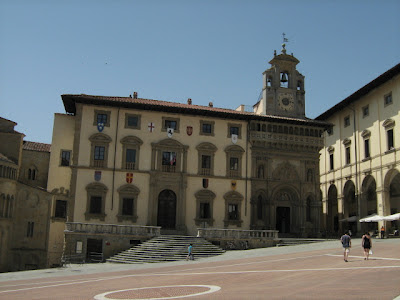 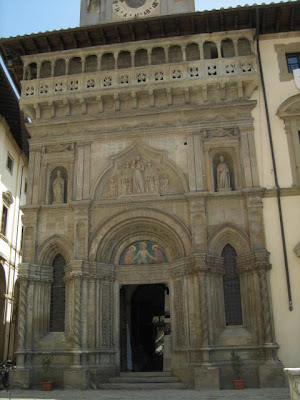 One of my favourite sites is, of course, San Francesco with its remarkable fresco cycle, "The Legend of the True Cross" by the great Piero della Francesca (can you tell I'm a fan?) This was my third visit to see these frescoes which I never seem to tire of. 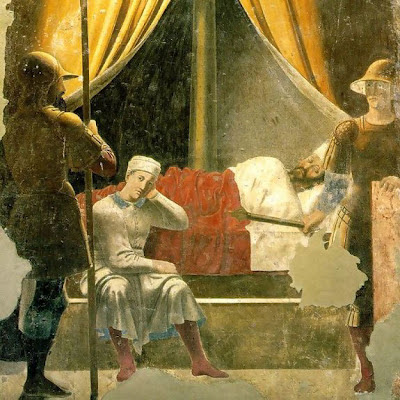 For the first time, I did  take myself past the Duomo (which is wonderful) to the lovely little Gothic San Domenico with its asymmetrical exterior and wonderful wooden cross, one of three painted by Cimabue.This one dates from between 1260 and 1270 -- which I find amazing, in part because it looks so modern in many ways! 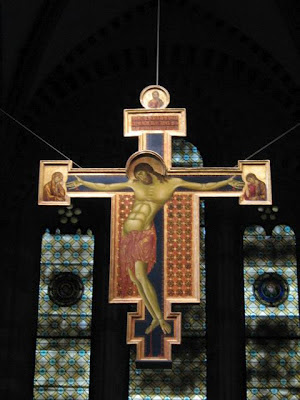 Cimabue, said to have taught Giotto, painted three such crosses, including one completed 20 years after this work and now hanging in Florence's Santa Croce.

Naturally, no amount of heat could dampen my appetite and I had a great lunch just around the corner from San Francesco, at Bacco & Arianna which is charming, stylish, and quite inexpensive. I was crushed that my favourite wild boar was not available, so I settled for a savoury pici with pesto di salvia (pasta with pesto made from sage.) 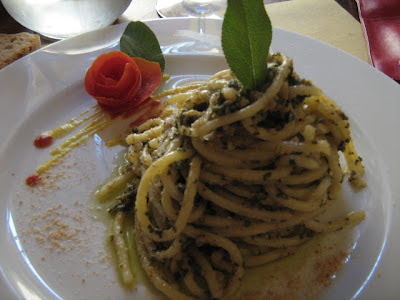 I did think the heat also justified a medium-sized gelato mid-afternoon and later, a whipped cold cappuccino.

It sounds like a great excursion from Rome. So many folks miss Arezzo - what a loss for them!

Great post, it makes me wonder: Does Sandra just know all these facts or does she research for each post and city or is she going on tours (has been on guided tours) to know these facts? and I also wonder: How is Sandra's italian going? Gelato flavor please, we live vicariously you know! Stay cool.

Jerry, it makes for a bit of a long day -- the train trip is about 2.5 hours -- but in June when the days are long, it suits me just fine.

Hi Kathryn! Yes, I do do a lot of research when I blog (the journalist in me.) I think if I went on tours, almost all the facts would go in one ear and out the other!

The Italian is coming along; I joined a great website a month ago, Conversation Exchange, that matches people by the language they want to practice. So now, I have a lot more opportunities to have conversations in Italian.

And my gelato was two flavours: pistacchio and an extremely strong espresso.

Hi Sandra, Arezzo sounds like a wonderful town. And I can see why you love revisiting to see the frescoes. It's very beautiful. It almost looks like real sunlight is on them.

Your pasta looks so delicious. What beautiful presentation. Heat is a good justification for gelato. I can justify for myself even in the freezing cold. :)

Thanks so much for taking us to so many new places. I really enjoy living vicariously in Italy through your experiences. Stay cool . . .

Hi Kathy, I'm glad to hear you're enjoying my posts about life in Italy -- maybe they'll give you some ideas for your next trip (with your sister, I think?)

This is a tough time of year in that it is so hot that sometimes it's a challenge to just stroll around, I want to dodge from shadow to shadow and spend too much time in air-conditioned restaurants and bars. Still, that's a small price to pay!

What a wonderful day, thanks for taking us along.

The piazza in the second photograph is so empty-you can just sense the heat!

The Cimabue cross is lovely.

Lunch sounds delicious and of course you should have gelato! Isn't gelato one of the basic food groups?

Susie, you're absolutely right -- why do I forget that gelato is in there with fruit, vino, porchetta.....!

It's boiling here in NC too - I'd rather be hot in Italy! Love the church and love the pici (one of my faves). Cheers, Annie