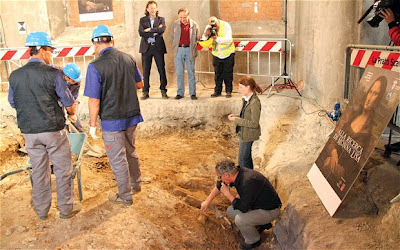 Well, they're at it again.

Archaeologists and Mona-Lisa-ologists (yes, I did in fact make that word up) have resumed the hunt in Florence for the bones of the woman who may have become the famous Mona Lisa.


Workmen with mechanical digging equipment have resumed removing a cement floor from the former Convent of St Ursula in Florence. It's believed that beneath the floor is the tomb of a young woman named Lisa Gherardini, who is thought by many art scholars to have been the model for Leonardo da Vinci's famous painting, the Mona Lisa.

Workers actually began digging for the tomb last year, but were stalled by a lack of funds, according to The Telegraph newspaper (the source for the above photo.).

However, the 110,000-euro cost of the renewed search will now be financed by authorities in Florence, the newspaper adds.

If researchers find bones, these will be sent to experts at the University of Bologna, who will attempt to conduct carbon dating tests and extract DNA.


That material will then be compared with DNA from the remains of Gherardini's children, who are buried in a church in Florence.

If enough remains are found, experts may be able to reconstruct the woman's face and learn more about her famous smile.

Vinceti, the head of the National Committee for the Preservation of Cultural Heritage, found the bones of Baroque painter Caravaggio and has reconstructed the faces of other artists based on their uncovered skulls.

All this could solve a mystery which has intrigued art historians for centuries – just who was it who posed for the painting, which hangs in the Louvre Museum in Paris. 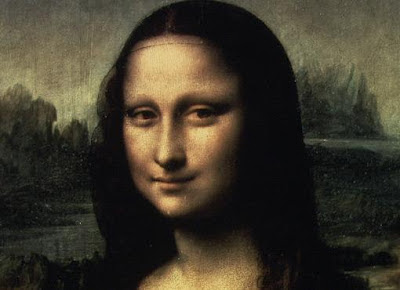 Lisa Gherardini was the wife of a rich Florentine silk merchant Francesco Del Giocondo, and the Mona Lisa is known in Italian as La Gioconda. The couple married in 1495 when the bride was 16 and the groom 35. She became a nun after her husband's death, and died in the convent on July 15, 1542 at age 63.

It has frequently been suggested that Del Giocondo commissioned Leonardo to paint his Mona Lisa (mona is the standard Italian contraction for madonna, or "my lady,") to either mark his wife's pregnancy or the recent birth of their second child in December 1502.

This is behind the notion that pregnancy or childbirth were the reasons for Mona Lisa's cryptic smile.

Other theories hold that the painting is actually a self-portrait of Leonardo or one of his male lovers in disguise. Proponents of that theory note that the painter never actually gave up the work but instead kept the Mona Lisa with him until his death in Amboise, France in 1519. 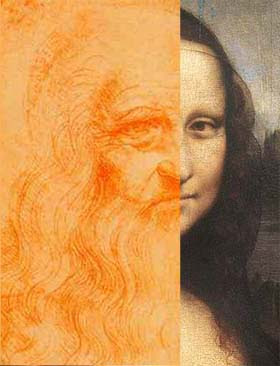 We visited Castel Giocondo winery in between Firenze and Siena where she lived - it is pretty.

Hi Sandra, this is such an interesting post. I didn't know about the self portrait theory. So fascinating. The painting and mystery behind this painting is very intriguing. I'll be very interested to see what more those "Mona-Lisa-ologists" uncovers in this mystery.

Kathryn, that must have been so beautiful!

Sandi, I wonder if it has been done? Could be very interesting.

Hi Kathy, it seems a lot of money is being spent to solve this mystery....but it is an intriguing one! Hope you're having a great weekend!

I think you've got the plot for your next novel set! Sandi is spot on.

What a fascinating tale - one to follow as they continue to work at it. I wonder how many other old archaeological mysteries will be solved with new advances in technology?