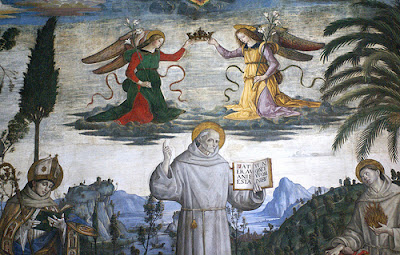 I have a soft spot for this very old church on the top of Rome's Capitoline Hill. It looks very austere but inside has some treasures.

My favourites, of course, are the 15th century frescos in the Bufalini Chapel, painted by Umbrian artist Pinturicchio depicting the life of Saint Bernardino of Siena. 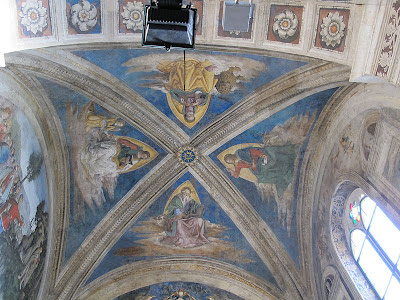 Pinturicchio, who was born in Perugia as Bernardino di Betto, was a paid assistant of Perugino and worked with him on Perugino's frescoes in the Sistine Chapel at the Vatican.

Pinturicchio's work on the Bufalini Chapel was one of his earliest independent commissions. 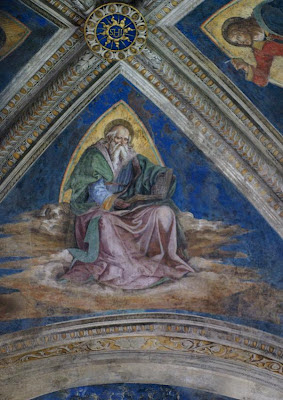 Yet the church's most famous and important treasure is a miracle-working wooden statue of the baby Jesus, which is said to have been carved from an olive tree taken from the garden of Gethsemene. It's brought out from its private chapel at Christmas, for other religious processions; and even has been taken to hospitals and to the beds of Rome's sick and dying, and has been known to bring about amazing cures.

Santa Maria in Aracoeli was build over the ruins of a temple to Juno Moneta and its transformation from a pagan temple into a church dedicated to the Madonna was legitimized by an ancient legend.

According to this legend, the Emperor Augustus received a prophesy from the Tiburtine Sibyl, who predicted the descent from the skies of  "the King of the Ages." As she spoke, Augustus saw an amazing vision: the Virgin Mary standing on an altar in a dazzling light and holding the baby Jesus in her arms. The Emperor also heard a voice, saying: "This is the altar of the Son of God."

Hearing that, Augustus immediately raised an altar on the site, the Ara Coeli, or altar of the heavens.

Historians' reports about the church date from the 6th century. 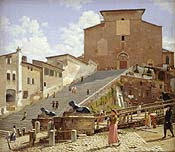 I liked this little painting by Danish artist Christoffer Wilhelm Eckersberg completed between 1813 and 1816 and titled: "The Marble Steps Leading up to the Church of Santa Maria in Aracoeli in Rome."


Here's how it looks today. Roman friends tell me that in the local dialect, Aracoeli is pronounced: Air-AH-show-lee. Apparently the shuuuush sound is very Roman. 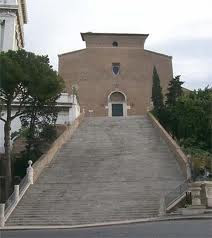 As usual, such an interesting entry. THANKS.

Hi Sandra, what a wonderful church. The frescos are very beautiful. I enjoyed learning about the history and treasures found here, especially the wooden statue of baby Jesus.

Thank you so much for introducing this church to us. Have a wonderful evening.

Huh! I'm reading a novel set in Rome, and the protaganist has just spent some time in this churh. Your blog is very interesting!

Hello Mary, there is something about the Umbrian artists that have such a draw for me.

Hi Kathy!Who can resist miracle-working statues! Hope you're having a great weekend.


Thanks Yvonne! What's the name of the novel? I always enjoy reading novels set in Rome!

I love Santo Bambino! This is one of my very favorite churches. I met the sweetest, kindest monk there once who blessed my Santo Bambino key chains.

I smiled at this comment: looks very austere but inside has some treasures. I do believe that describes abouy 90 % of the churches that have seen in Italy!

Keep up these wonderful posts on the sights of Rome - we're making notes for our upcoming trip.

Susie, that sounds like a great memory. I like how sometimes small kindness can have such an impact.

Jerry, you're so right! In Italy you really can't tell what's behind some fairly forbidding exteriors. I hope your planning for the upcoming trip is going well!

What a cool little church. I love that blue in the frescoes. I love the story of the carved baby too. Sounds like you are having a wonderful spring in Roma!