Orvieto for the day 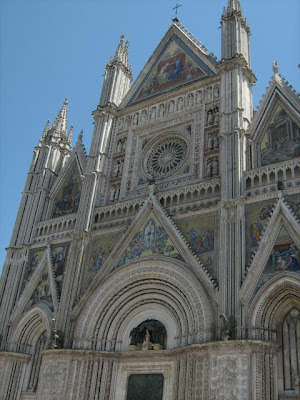 It's about 15C (60F) in Underground Orvieto -- a perfect break from a hot, hot day above ground, and an opportunity to learn about the mysterious Etruscan people who settled here long before the Romans, long Before Christ. 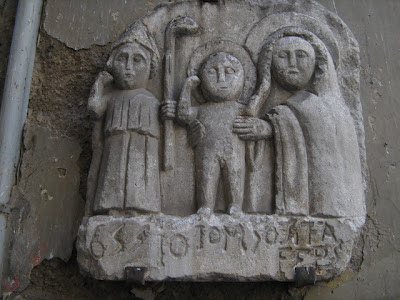 Orvieto, an ancient Etruscan city that sits high atop a massive hill formed of volcanic Tufa-rock and located about 95 kilometres northeast of Rome, is both beautiful and fascinating. 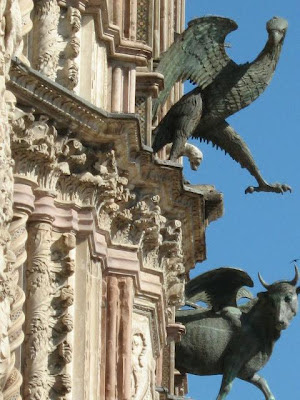 Its Duomo, with a spectacular 13-14th century facade, is one of the loveliest I've ever seen, and its streets and other churches so pleasant. 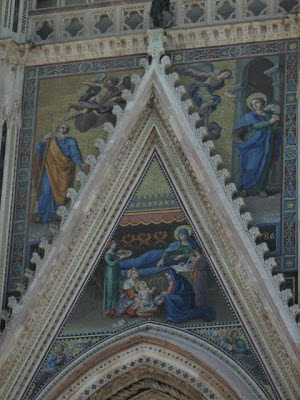 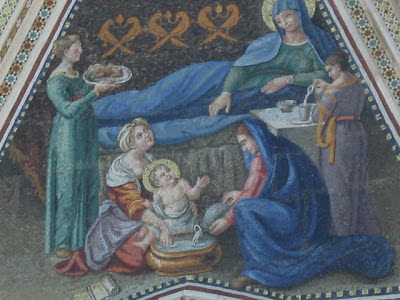 Yesterday, I desperately needed a break from the city and hopped a train out of Rome. Orvieto was just what I needed.

I had visited here before but was so rushed and disgruntled on that day that it was as if I had never really seen the city. So this time, I felt I was starting fresh, seeing the major tourist attractions for the first time.

Starting with the Underground Orvieto tour. Quite a contrast from the beauty above ground, but also very cool and mysterious. By walking through the caves and tunnels, it was easy to image the lives of the Etruscan people who lived here and set up their temples, workshops, and deep wells in the hundreds of caves that burrow beneath the city.

The  Etruscans established the city, called Velzna, between the 9th and 3rd century BC but were eventually driven out by the Romans. 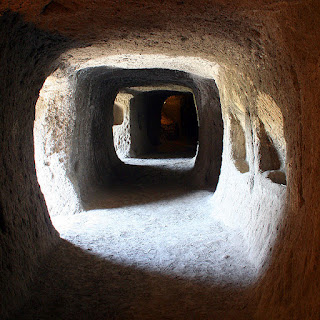 The caves helped them stay cool when working in the summer, and warm during the late autumn/early winter when the olives are harvested and crushed into precious oil.

I wonder if they ate wild boar that was anywhere as delicious as the cinghiale I enjoyed (with polenta) at Trattoria Etrusca, near the Duomo?

Back above ground, I was of course fascinated most by the Duomo, and found some interesting sculptures on the facade, especially this Annunciation (for my collection!) 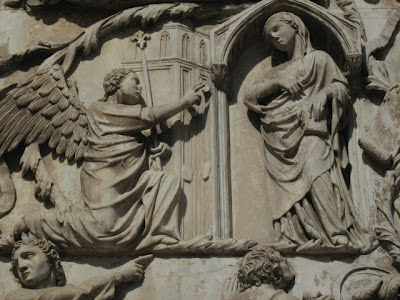 Some lovely Umbrian views from the walls of Orvieto: 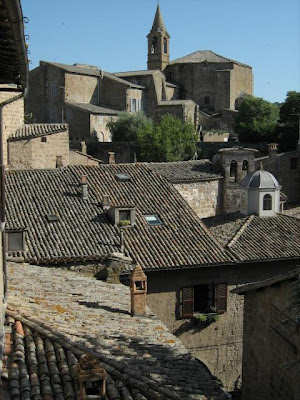 And some cool street art on Via Michelangeli, which is crowded with craftsmen of all types, but especially wood-workers and ceramics makers. 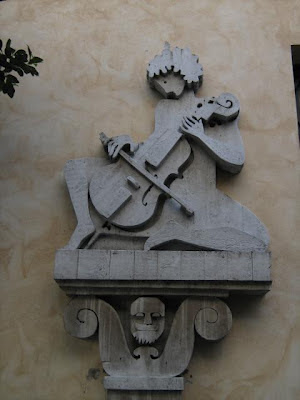 I thought these were festive: 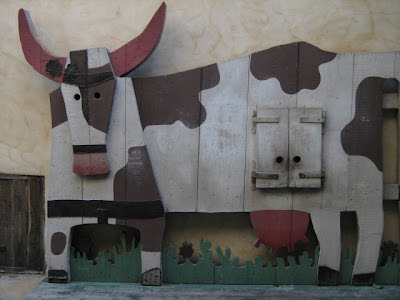 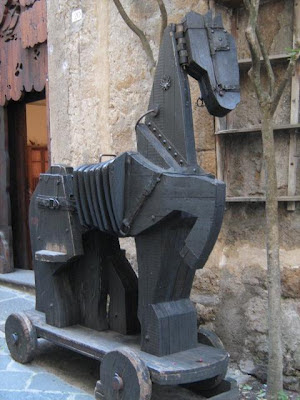 One of the first white wines I liked had Orvieto in its name. Your day sounded "cool" (pun intended). Too bad you couldn't find someone to take your picture on the last horse.

Thanks Kathryn! And wouldn't that have been a great photo?

Hi Sandra, Orvieto looks like a wonderful getaway town. I enjoyed learning about the Etruscan people. All of your photos are very beautiful. I thought the cow was cute.

Thanks so much for sharing. Glad to hear that you enjoyed your day trip.

Hi Kathy -- I also liked the cow, but not as much as I loved your Highland cattle! Nothing could be as handsome as that "Ringo Starr" cow with the great, long bangs down over the eyes!

Orvieto is high on my wish list. I would love to do that underground tour!